On Friday 12th January, South African born former safari guide Chris Tinkler packed up his life at Jongomero in Ruaha National Park, Tanzania. On Saturday he flew to England. On Sunday he unpacked in his new Brighton home, and on Monday morning joined us at Journeys by Design as the newest member of the sales team as a Senior Destination Specialist.

I had the chance to meet and catch up with him – one of the joys of my job being allowed to shamelessly pry on the life and times of new team members – and he took me from the top. I wasn’t disappointed.

‘My parents used to take me to the Kruger National Park ever since I was about five years old. It was my favourite holiday of the year. So, after I left school, did a couple of random jobs for a while. I had originally gone into IT, but had enough of that and really missed those times being in the bush, so I enrolled in a guide training course when I was 23.’

Chris then spent a year in Makalali Game Reserve under the instruction of Mark Montgomery, one of the most senior guides in Kruger at the time, and who he was trained by before taking his guide exams and working there as a guide.

‘My time there was partly spent running programmes for students, driving them around and giving them the chance to help out with hyaena research and learn bush craft and game ranger skills. After that, the next big step was moving to North Island. I wanted to move to Zambia so I applied for a job with Wilderness Safaris. They called me up and said ‘I know you wanted a job in Zambia, but we don’t have one, so how would you like to would you like to go to North Island in Seychelles?’ I wondered what on earth I would do there as a safari guide.’

Regardless, Chris’s story took him to North Island, where he was quickly made the deputy manager of conservation for the whole island, and took charge of the turtle research programme.

‘All the nesting sites were under my responsibility, so I spent quite a bit of time relocating turtle nests that had been exposed to the wind, where the sand had blown them away and that sort of thing. I was also in charge of all the guest nature-based experiences on the island, so took people for walks, up the mountains, and though the forests, and did educational talks in the evenings.’

Having spent some time there, something finally opened up in Zambia where he spent time as a relief manager and guide at Shumba Camp in the Kafue. As is the nature of the guiding and moving about, he then took a job at &Beyond at the time when they were beginning to start out as a tour operator.

‘&Beyond was different. I stayed in Johannesburg and my job was going out to try all the third-party properties, which is why I now know a lot of places I never guided at. They used to send me all around the Okavango, Zimbabwe, parts of Zambia, Mozambique, all over the Serengeti. So, besides the actual job part, we used to get to travel lots. After a year, I went into international sales, which involved travelling even more.’

Chris goes on to tell me about heading up sales in Australia, New Zealand, France, Belgium, Holland, Italy and Spain, jetting off almost constantly, basically marketing &Beyond and showing its new products.

‘It was cool and I enjoyed travelling, learning about the international sale aspect of where our guests came from. I’d have three weeks in Australia, then two weeks at home, then I’d be going off for another three weeks in Europe, then it was trade shows, travel shows, three weeks here, two weeks there. I loved doing for a while and then I got together with Sam, my girlfriend at the time – now wife.’

The very Sam who, in two weeks, will be our newest member of the team. But that’s for the next blog. So, having worked at &Beyond for a while, Chris and Sam got married and moved to Kenya to run Encounter Mara, then to Chem Chem in Tanzania, back to the Kruger to help run The Outpost, and then to Jongomero in Ruaha, where they spent three years before coming here to Brighton.

‘So, that’s my whole career in a nutshell. I think one of my favourite memories was a time Sam and I took a drive out to Jongomero down a little track that hardly gets used. We came across some lions. The way they reacted I’m pretty sure they had never seen people before. They were crouching down; should they attack us, run away, darting back and forth. They reckon that there are huge pockets where lions can go their whole lives without coming into contact with humans because the park is so big. That’s what I love about Tanzania – the untouched wilderness, the big skies, the space, the wild animals.’

He then reeled off a list of ‘close calls’ as a guide, which included being charged by a buffalo in the Kruger, a hippo in Ruaha, both while on foot, coming between a lioness and cubs on a walk and, on his first day at Jongomero, being surrounded by a 70+ herd of elephants and having to make a dash for camp.

Chris’s experience not only at a tour operator, but moreover as an expert guide has given him a unique insight and knowledge into everything from the best beers on tap at various camps, right up to the bushes best to avoid while on walks. He is a pro, but I would say more importantly, a fascinating person to talk to. If you’re interested in planning an adventure to Africa, do get in touch; the talk alone will be worth it. 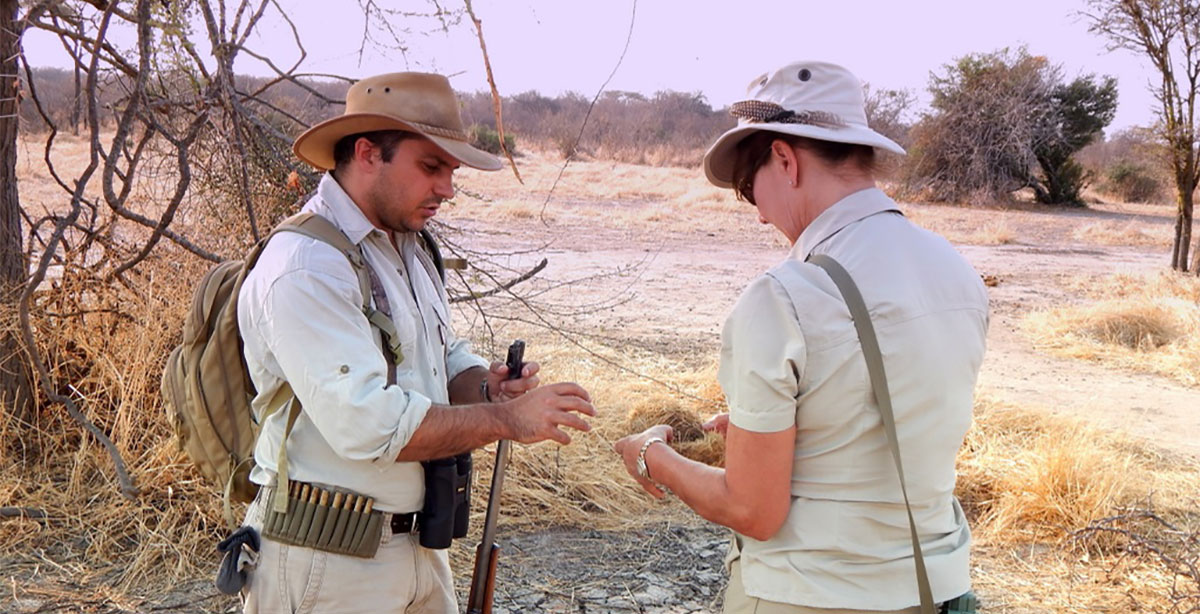