Chris Tinkler shares the first half of a recent trip to Ethiopia, one in which the helicopter plays a magically central role to the experience.

This trip was not my first time to Ethiopia, but looking back on it now, it may as well have been, given how much I learnt, the opportunity to explore Ethiopia’s north by helicopter over eight days giving me an entirely new experience of a land and people I thought I had already got to know quite well.

City of revelation
We arrived in Addis Ababa and we had a full day to explore the city. This was particularly exciting to me as I didn’t get to do this on my last visit. Addis is a large city and is seen as a commercial flight hub to most travellers, instead of a place that has something else of interest to offer. We arrived as many Christians in Ethiopia were preparing to celebrate Meskel, a ceremony where enormous bonfires are lit in a symbolic re-enactment of the Queen Eleni’s revelation to the people of Jerusalem that the smoke of the fire would lead followers to the location of the true cross. Everywhere we went, signs of the upcoming celebration were evident and the city had an incredible positive energy about it.

The history here in Addis is rich – as we discovered in our visit to the Holy Trinity Church as well as the National Museum, which houses a variety of artefacts and pieces of art. Perhaps what was most interesting was the lower floor of the museum, which had a lot of items, skulls and bones from what would be considered pre-history, but not quite as old as the dinosaur ages. Massive sabre-tooth cats, enormous elephants, crocodiles 33 feet long and wild boars as large as modern day lions once roamed the mountains and planes of Ethiopia. Of course, the bones of a variety of hominids are on display, including the famous Lucy – known as Dinkesh in Ethiopia. All are a reminder that we are in an ancient land where life on earth has its deepest roots. 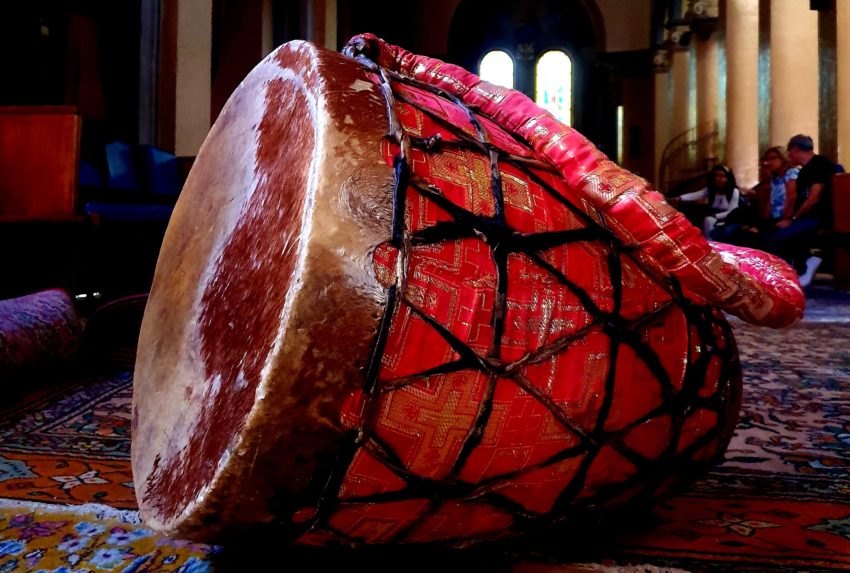 On being eagle
The next morning, still relishing stories of the fantastic local cuisine from the night before, including our visit to the oldest coffee shop in Addis Ababa, we were transferred to the airport, where we met our pilot Hoho Andrews and got the full safety briefing before departing. Flying in a helicopter is something I have been fortunate enough to do before, but it’s always a wonderfully surreal experience. Everything feels like it’s moving in a slow-motion replay, despite the fact even that it can also create some adrenaline-filled moments. You do feel as if you are gliding just above the earth, and were it not for the sound of the rotors, I’m sure it would give you an eagle’s perspective, and that is something very special.

Our first leg of the journey was to fly towards a town known as Gondar. Our course was to follow the Blue Nile River, but before we got there, one thing became clear a few minutes outside of Addis, when all traces of modern civilisation appeared to vanish in an instant: this a giant and old land. There were small farms and homesteads, but not a single road in sight for almost the entire journey – and not even any sign of a motorised piece of farm equipment. It was as if the helicopter had become a time machine and transported us into biblical times. This is something you would not see without the helicopter, as I feel it required the low flying aerial perspective to capture this way of life. 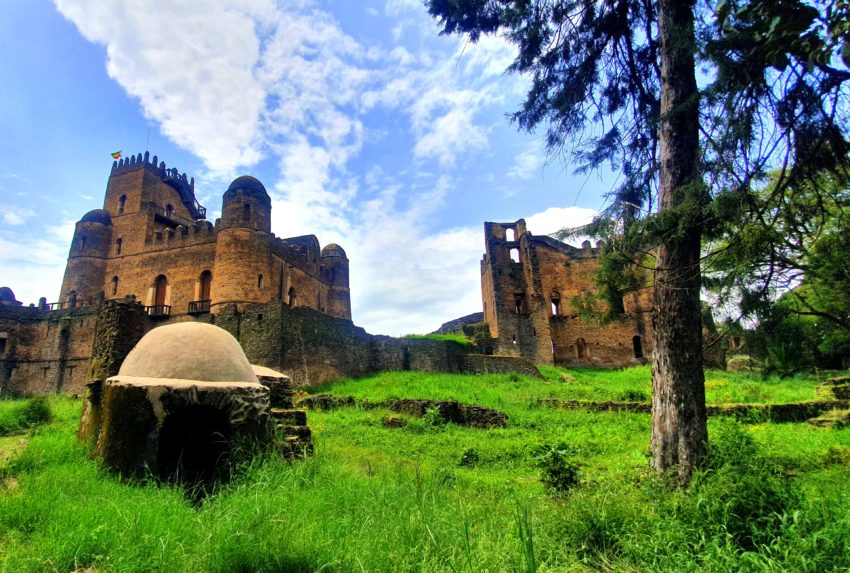 Land of water
The Blue Nile Gorge is stunning. We flew low into the gorge and spotted huge crocodiles and enjoyed the freedom of flying between the cliffs. The beauty of being in a helicopter is not just being in the air, but the option to land in some of the most inaccessible and unusual locations for a well-earned coffee break, the riverbed of the Blue Nile being our first stop, Gondar our second. As well as pilot for the whole trip, Hoho was guide to everything we saw and experienced. He was, in a word, fantastic, as adept at explaining the many geological formations in the area as he was bringing to life the palaces of King Fasilides in Gondar, which again have stood the test of time since the 1600s.

The stop in Gondar included another fabulous local lunch and then it was to the skies again, flying into the Simien mountains, towards our first overnight stop at Limalimo lodge, which sits at roughly 3200 meters above sea level. Flying into these mountains feels like something out of a fantasy: they could easily be the setting for another Lord of the Rings or Jurassic Park movie. The thing that struck me from the air was the amount of water here. There was hardly a cliff that didn’t have a series of thin waterfalls coming off its top, some were falling at great height, and I doubt that all of these have been explored, or ever will, access to them being all but impossible.

Among gelada and walia ibex
We settled into the lodge that night and the next day we set off by car to go deeper into the national park. We found a group of gelada monkeys as we ascended and got out and sat amongst them. There are people in the national park and these monkeys or baboons have become very habituated to our presence. We sat amongst them and watched as the young played and the adults fed on the grasses. Large males became the favourite subjects of photography with their fur looking like a large cape on their back and offering us a variety of facial expressions as they went about their business.

The air got thinner and our breathing harder as we reached 4200m at the furthest point in this day’s journey. This was all worth it, however, when we found several walia Ibex, thanks to Hoho, whom we dubbed “eagle eyes”, such was his ability to see a flick of a tail in thick mist. The walia ibex rams are impressive and formidable looking creatures and I would not want to consider them on the menu if I was a predator roaming these parts. 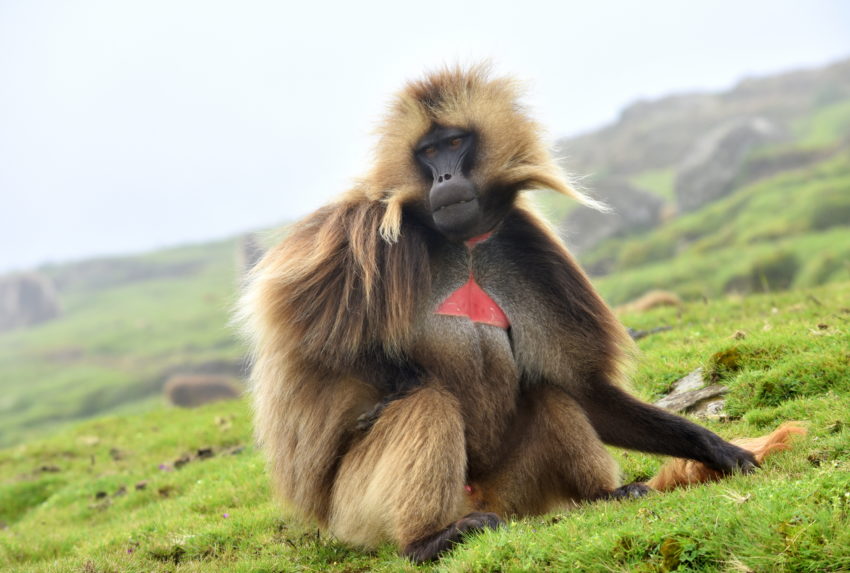 Destination Lalibela
Flying on again in the helicopter, we were going to say goodbye to the mountains and move towards the religiously significant Lalibela, famous for its churches carved right out of the foundations of the earth.

This was one of the days where yet again the land below transformed so rapidly that you could have easily been confused as to where in the world you were. We emerged from the mountains with its green, mist-covered peaks, and descended into a kaleidoscope of reds and browns as we entered an area known as the Tekeze Canyon. There is a vast dam here, its deep blue water a direct contrast to the surrounding cliffs, where you could easily think you were in Arizona or Nevada, so reminiscent is it of the Grand Canyon.

Again, it’s an experience of a terrain so vast that it would be impossible to cover without a helicopter, in effect our time machine or teleportation device. A modern-day magic carpet, it is a truly magical way to explore Ethiopia’s vast landscapes.

Stay tuned for Chris’s account of the second half of his trip. In the meantime, if his championing of the helicopter as ultimate safari vehicle has caught your imagination, please do get in touch. He’s back on terra firma and keen to share the magic. 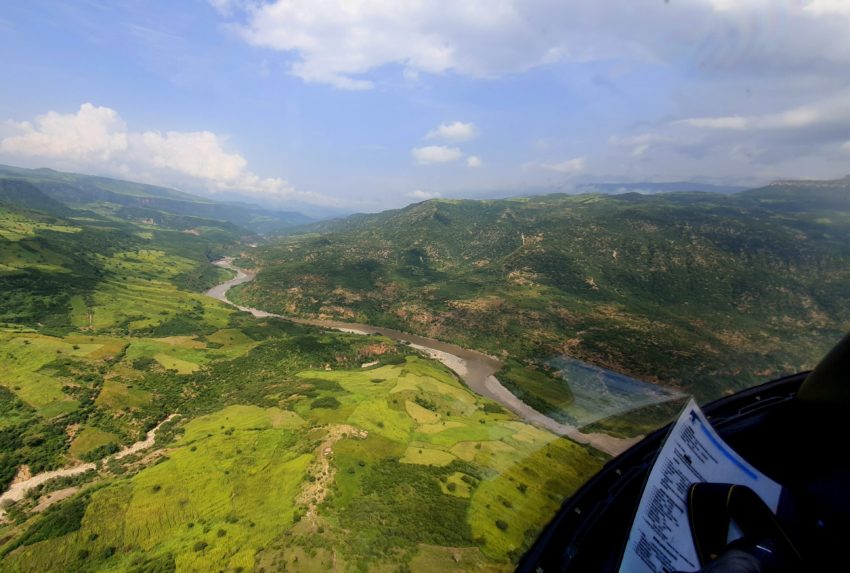