I was browsing pictures I had taken from trips to various places over Africa in the past and came across my pictures of Zanzibar, where my wife and I spent our honeymoon. The stresses and strains of planning such an impossibly enormous occasion as a wedding would have been enough of an excuse to spend two weeks on the beach.

Throw into the mix starting new jobs, moving house, and Harriet, my wife, handing in her post-grad thesis – all in the week leading up to the day and you can see why we seldom moved from the grooves we had created on the sandy beach for the duration of the holiday that followed. Meaning, we never got to see Stone Town, and whilst I don’t regret our sublime break, after hearing other people’s stories of it, I would love to next time.

A brief history: People have lived in Zanzibar for 20,000 years. It was settled by Bantu fishing communities in the first century. It would later become an important trading port for Oman and Yemeni traders. The Portuguese were the first Europeans to invade Zanzibar, and begun to build a fort at the edge of the natural harbour, in which Stone Town now sits. After the Portuguese were pushed out, the Zanzibari nobles relinquished political power to the Sultan of Oman in exchange for defence.

The Omani Sultan completed the Old Fort, which now stands as a focal point for the rest of Stone Town and its importance as a hub for the slave and spice trades grew, particularly in 1840, when one of the sultans moved his seat here from Muscat (in Oman). It was around this time that many Indian, Persian, Omani and European communities sprang up as a result of its importance as a trading post.

Since the slave trade was the source of much of the sultanate’s wealth and power, when the British, who at the time, ruled large swathes of the ocean, outlawed slavery, the Omani sultanate diminished quickly and Zanzibar became a British protectorate. It was in 1896 that the shortest war in history was fought between the Zanzibari-Omanis and the British. It lasted 45 minutes, the Royal Navy’s bombing of Stone Town resulting in the the sultan surrender.

Still, the Sultan retained some power and because the British didn’t have a huge amount of interest in developing Stone Town as a port, the old buildings remained. Zanzibar gained independence from the British in 1963, and in 1964 a revolution overthrew the sultanate, forming a socialist party and joined with Tanganyika, to form Tanzania. Despite this, Zanzibar has largely retained autonomy to this day, and Stone Town kept its role of the capital of Zanzibar and seat of the newly formed government. It’s been given UNESCO world heritage status?

I got to catch up with Dave Waddell, drinks journalist and old friend of Will Jones. In 2012, the two set off for Zanzibar, following on from on a trip in which Dave had convinced Will that five bottles of whisky ought to accompany them, and form the basis for an article for the Whisky Magazine. Do have a read if you’re interested, but briefly, the trip involved Tarangire National Park, Ngorongoro Crater, Serengeti NP and Selous, before heading to Stone Town in Zanzibar near the end.

‘First of all, I remember the feeling of walking outside while we were at Dar es Salaam waiting for our flight and felt like the times I used to go to Mombasa as a child on holiday: a wave of humid heat hit me. It felt like Mombasa, and so did Zanzibar, or like Morocco, but with less tourists. I bought Tash, my wife a bracelet. I asked the guy selling it how much it was. He laughed and said, ‘Do you want to haggle or do you just want the real price?’ I paid the ‘real’ price, which was worth it, partly because it’s an incredible piece of craftsmanship, and partly because I probably would have paid twice that if I had tried to haggle!’

‘Aside from that we spent a lot of time visiting the local bazaars, having tea on the roof terraces, watching the football on the beach, eating in real local restaurants, the sort with local food, local prices and local banter, and then visiting the Freddie Mercury bar, which is much more tourist-orientated, but needs to be done, given that Mercury grew up in Zanzibar.’

Dave went on to say he doesn’t blame me for staying on the beach for the duration of my time, such is the feel of the place – whether it’s the people one encounters there, the sun, the sea air or the fact that everything that is going on around seems interesting, it gives one the overwhelming urge to stop, rest and mindfully take in one’s surrounds. This being the case, it’s hard to get up off one’s sun lounger and visit the likes of Stone Town.

No regrets, then. A honeymoon is a honeymoon. However, as you can see, there’s certainly a draw to visiting more than just the beach when you come to Zanzibar. Stone Town is a UNESCO world heritage site for good reason. Whether historical architecture is your thing, or exploring the old streets of Stone Town and taking on the age-old disappearing game of haggling or simply a good spicy dinner, it is a must see.

If you’re interested in a trip to Stone Town, Zanzibar or Tanzania in general, please do get in touch. 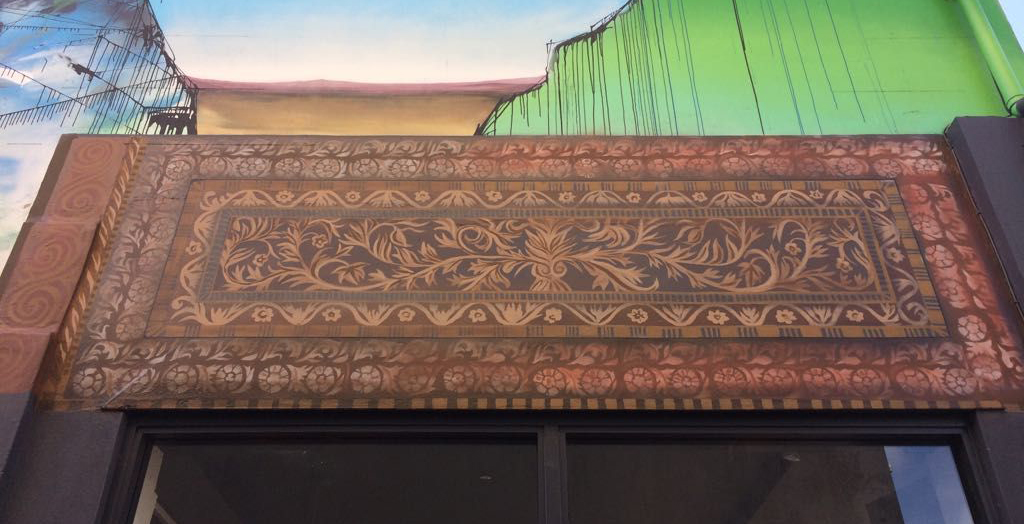 Top image was taken by Andrew Morgan on the roof of Emerson on Hurumzi; the bottom image, taken by Emma Baker, shows the Zanzibari influenced street art on the side of the Journeys by Design office.