It’s World Giraffe Day on Thursday and what better way to look forward to it than writing a blog about these outstanding creatures. You may remember my lesson on taxonomic classification – if not then you can recap here, but briefly, all life can be categorised into their different species, all of which fall into groups called ‘genus’. The genus goes into a group called the ‘family’, the family into and ‘order’, and so forth, right up until ‘kingdom’, of which there are five or six, depending on which scientist you’re talking to.

This explained, you will be interested to know that the giraffe (Giraffa camelopardalis) isn’t a species but in fact a genus. Recent research by Giraffe Conservation Fund indicates that there are in fact four extant giraffe species. Something debated, disputed and unproven, after analysing the DNA of 200 giraffes from over Africa, the evidence is looking conclusive. Also interesting is the fact that seven other species of giraffe have gone extinct. Those species still in existence are the Maasai giraffe, the reticulated giraffe, the southern giraffe and the northern giraffe. The southern and northern giraffe species have two and three subspecies, respectively. They cannot interbreed in the wild.

The giraffe is a feat of evolutionary mechanics. It’s prehensile, 18-inch, purple tongue is perfect for reaching for and tearing off leaves. Its 6-foot neck allows it to reach for the unreachable and is also used as a club against competitors. It’s legs are as long as its neck. It has four stomachs. Needed to pump blood to its extremities, it’s two-foot, 25-pound heart is a giant. Capable of holding 12 gallons of air, it’s lungs are similarly large. In the wild, it sleeps an average of three to four hours a day, snatched in half hour sessions. It’s an extraordinary animal.

This, I feel, would be a good note to finish on. However, I just wanted to touch briefly on the IUCN Red List status of giraffes. Giraffa camelopardalis has been given the status vulnerable. In the last 30 years, there has been a 36-40% decline, putting the population (2015) at 97,562. The picture changes when we look at different species, with some giraffe species and subspecies populations increasing or remaining stable, while others are decreasing. For example, the South African giraffe has increased from a population of 5,000 in 1960s to 13,031 in 2016, whereas the Nubian giraffe has decreased from 20,577 in 1980 to 650 in 2016 – all subject to various threats and pressures within their distributional ranges.

My favourite of these, perhaps because of my time most recently spent in Northern Kenya last October and for their sheer beauty, is the reticulated giraffe, of which there are approximately 8,600 left in the wild. The above picture was taken on Borana Lodge’s ranch, from horse back. It was golden hour behind the lens and in front of the lens you can see the thunderous colour of the clouds. The below picture was taken at Namunyak Conservancy, just before the rains came after a two-year drought. The subject was once of the animal orphanage at Sarara, and easy to spot, given its missing left ear.

So, there you have it. If you’re thinking of travelling to view the giraffe, my personal recommendation would be to visit the reticulated giraffes of northern Kenya. They do make for good photography, but I guarantee you’ll come away with more than just pretty pictures. Happy World Giraffe Day!

If you’re interested in visiting Northern Kenya please do get in touch. We’d love to help you plan your adventure. 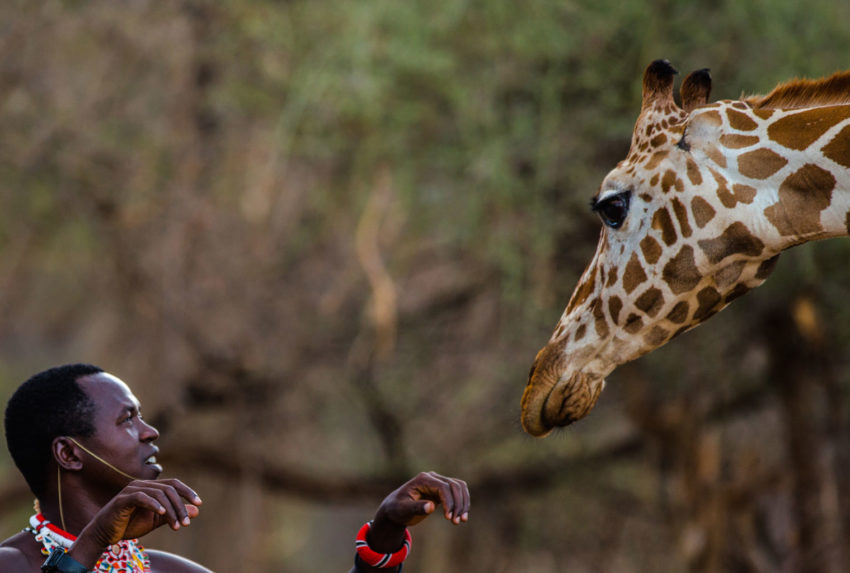