Those of you of a certain age, and from the UK, will remember a wrestler who fought under the moniker Big Daddy, wore a Union Jack wrestling suit, and regularly took on Giant Haystacks and other similarly marvellously named adversaries. Rest assured: the Big Daddy that is the subject of today’s blog is not that Big Daddy. Rather, it is the name of one of the world’s tallest dunes, in Sossusvlei, Namibia and my choice for the Seven Wonders of Africa series. I just couldn’t resist the title, which goes some way to helping describe mine and Hannah Rayner’s experience climbing said dune earlier this year.

We left Sossusvlei Desert Lodge before sunrise, and were dropped off at Sesriem Gate, from which we planned to walk across the Deadvlei (salt pans) and up Big Daddy’s ridge. That’s the only route up. The ridge has been formed by the winds and is that bit harder underfoot. If you tried to climb up any other part of it, you’d end up slipping back down. The dune’s 325 feet high, but the walk from the gate to its summit is obviously much further. Note to all intrepid Big Daddy climbers: take water, lots of it, at least three litres – you’ll need it. Wear loose clothing, sun cream, and a hat. And don’t forget your sunnies.

Although the ridge is the route that everyone walks, it’s still hard going. In the beginning, and especially if you begin as early as we did, it’s a fairly gentle walk. However, as time passes, and you start to climb, the heat begins to take its toll. There’s no shade, and for every step, you slip back three quarters of a step. It’s quite brutal, so much so that Hannah, who had been carrying a cold, very wisely decided not to push things, and stopped, along with one of our fellow travellers. I plodded on with our guide and her partner.

All in all, with increasingly frequent stops, it took us about two hours to make the summit. I’d be lying if I said it wasn’t a struggle, physically and mentally. However, it was also more than worth the effort. It’s just so beautiful. As you gain height, and look out over the dunes, it looks like the ocean. The wind creates these waves in the sand. Once on top, it reminded me of skiing. It’s so still, the view so monumental, and when you look down, people walking up the ridge look like ants. It was massively satisfying being up there.

We stayed on the summit for about ten minutes. Looking down I could see the white speck that was Hannah. She had made her way slightly off the ridge, and had sat down to wait for us. (If you look very closely at the title image, you can see her in the right hand side of the photo, next to a bush. You can also make out some other morning hikers, making their way along the ridge of the dune.) Coming down was a joy. Ignoring the ridge, we simply slid down the side, the sand slipping beneath our feet. It was so easy, and took no time – literally minutes – before we had caught up with Hannah, and were all walking across Deadvlei, after which we made our way back to the vehicle, and had our breakfast cooked on an open fire. Delicious.

So, there you have it. Namibia’s Big Daddy, well wrestled. If our experience piqued your interest, do get in touch. Whether you choose to climb Big Daddy or not, Namibia is an extraordinary destination. 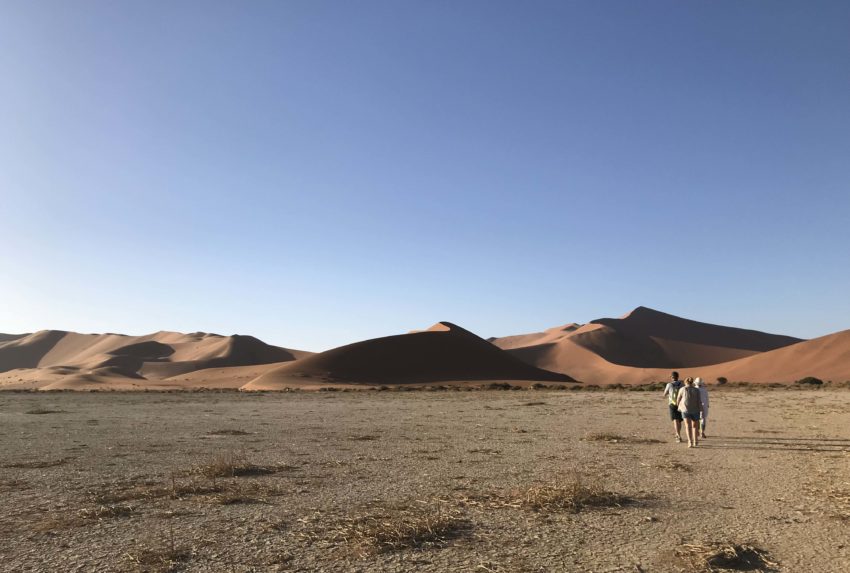