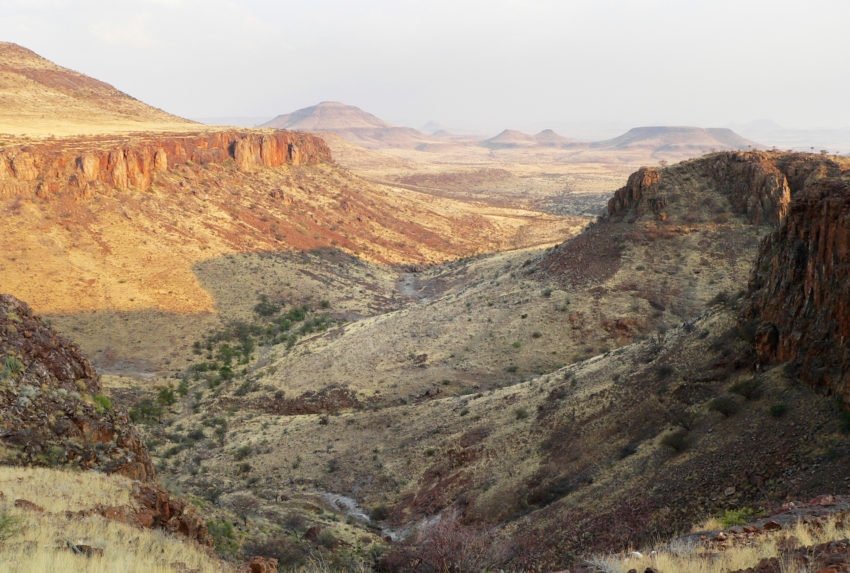 Namibia is located in southern Africa. It is bordered in the north by Angola and Zambia, in the east by Botswana, the south by South Africa, and in the west by the Atlantic Ocean. At the moment, Journeys by Design designs itineraries that include the following destinations: the Caprivi Strip, Damaraland, Etosha National Park, Namib Private Reserve, Skeleton Coast National Park, Greater Sossusvlei, Swakomund and Windhoek.

As with the rest of southern Africa, Namibia experiences a subtropical climate, the particularities of which are determined by latitude, to a lesser extent by altitude, by its proximity to the Atlantic, and by the characteristics of its dominant air mass.

Situated on a subtropical latitudinal range of 17° to 28°, Namibia has a bimodal precipitation pattern. The wet – or rainy – season occurs in November to April. These are the summer months and are characterised by rising temperatures – which during the day average out at between 25°C and 35°C, depending on where you are, and during the night fall to between 10°C and 20°C. The rains peak in January and February, occur in great bursts and can bring travel to a standstill. The winter or peak dry season occurs June – September, when temperatures fall to a daytime average of 15°C to 25°C, and to a very cold night time average of 0°C to 10°C.

With the Inter-Tropical Convergence Zone (ITCZ), which brings rain to much of equatorial Africa, no more than grazing northern Namibia, levels of precipitation decrease southwards and westwards. The northern most part (less the coastal strip), which includes the Caprivi Strip and Etosha, receives about 700mm of rain per year. The central plateau – Windhoek, parts of Damaraland – receives in the vicinity of 350mm. In the southern deserts, rainfall levels can be anything between 25mm and 150mm, while the coastal strip- the Skeleton Coast – rarely experiences anything more than 25mm of rain per annum.

The country owes its aridity to the overbearing influence of the Benguala, a predominant and north flowing Atlantic current, whose cold upwelling allows for little sea-based evaporation and produces, therefore, a high pressure zone – or Mid-Latitude High Pressure Zone (MLHPZ). Cool and dry, this air mass moves inland, providing little rain, the levels of evapotranspiration far exceeding the density of the air mass’s moisture content. Indeed, the specialist fauna that survive along the likes of the Skeleton Coast obtain water not from rain, but either – as is the case with Namibia’s desert elephants – from the water found beneath seasonal riverbeds or from the plants they eat, while the flora has evolved to survive solely on the morning fogs that penetrate up to 60 kilometres inland.

As a rule of thumb, when we speak of the climate and its effects on wildlife, it is true to say that game viewing in Namibia is best during the dry season, when the animals are forced to exploit fewer sources of water. During the wet season, the animals are afforded greater cover, are more widely dispersed and therefore much more difficult to spot. This is especially true of Etosha, the Capri Strip and in the greener uplands. Moreover, the summer months are genuinely uncomfortable, day and night. However, there are exceptions: the Skeleton Coast is relatively cool throughout the year, and the Kalahari, while super hot, sees the animals massing during the rains, the area’s cover negligible compared to that found in the north. Bird watching is best during the summer, from September, with the arrival of the first migration.