If you’ve been to London recently, to the likes of Covent Garden, the City, Mayfair, Kensington or Marble Arch, then you will no doubt have noticed that some of its public spaces have given birth to beautifully decorated life-size rhinos.

A lovely awareness campaign initiated and run by Tusk, the works of art were created by a whole host of artists and designers, including the Chapman brothers, Marc Quinn, Nancy Fouts and Ronnie Wood. Each rhino has been sponsored by a different individual or organisation, while costs for the project are shouldered by not-for-profit ISPS, by Land Rover, and by logistics gurus Pickfords. The rhinos will be in place until World Rhino Day, after which they will be auctioned off at Christies, London.

It’s a great idea. There’s more than a nod here to the decorated animals found in all sorts of mythologies, and the different artistic takes are fascinating. I love Patrick Hughes’s Rainboscerous, which utilises the 3D rainbow art for which he’s known. I’m also a big fan of David Mach’s Rhino Eterno, a day of the dead rendition that leaves few in doubt as to what the campaign is all about. They’re all wonderful.

As concept, it reminds me of a similar and sobering installation, this time in South Africa, in the Kruger, where a decorated rhino is surrounded by small white crosses depicting the numbers poached each month. In terms of Africa-specific rhino vulnerability, there are just two related female northern white rhino left, making it effectively extinct. The southern white is in a much more a healthier state, but is still listed ‘near threatened’ on the IUCN Red List. Meanwhile one subspecies of the black rhino was declared extinct in 2011. The remaining subspecies of black rhino remain ‘critically endangered’.

All of which explains the need for campaigns such as Tusk’s. Conservation. Protection and good husbandry practices work. A century’s worth of efforts to conserve the southern white has seen it recover from near extinction. The black rhino’s numbers have more than doubled since the mid-1990s. Even so, counts for poached rhino have been on the super rise in the likes of the Kruger, and there there remains a degree of discrepancy over living numbers, with some claiming much lower counts for the southern. There’s an enormous way to go.

So, if in London, do go visit the hotspots, and if in the position to bid on any one (or more) of the rhinos, then Christies’s a date. In the meantime, if you’d like to know more or to donate, do contact either Tusk or Save the Rhino. 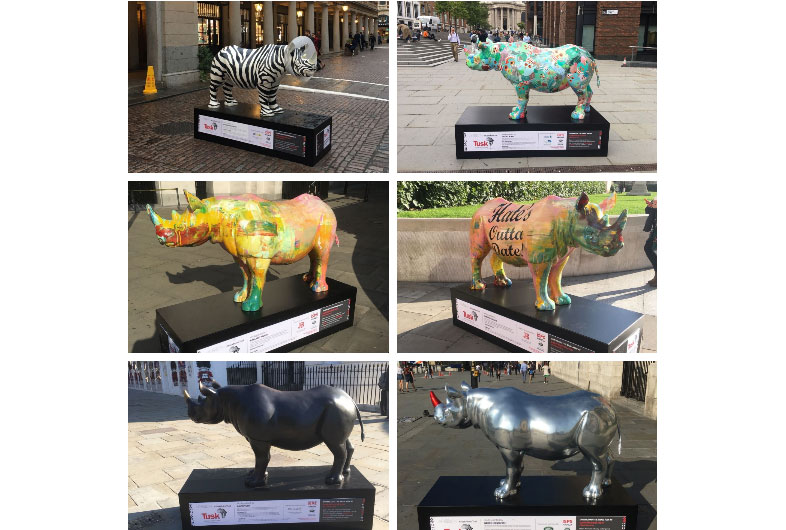