On a recent safari in Hwange National Park, Zimbabwe, I was fortunate enough to spot the new dominant, male lion in town, Bubesi. After the tragic killing of Cecil the lion by trophy hunters in 2015, there was an international uproar, the hunter outed and shamed. However, this didn’t deter hunters from killing one of Cecil’s sons, six-year-old Xanda, who was shot when he roamed outside the protected area of the national park two years to the month after his father was killed in much the same way.

While Jericho, Cecil’s partner in crime at the time of his death, has partnered up with a lioness called Cathy and had their own litter of cubs, Bubesi, originally from the Back Pan’s pride in the Wilderness concession, has expanded his territory. He has been sighted regularly in the areas once dominated by Cecil and Jericho, including the Somalisa Concession. To avoid conflict with Bubesi and his pride of 13, Cecil’s lionesses have moved extremely large distances and moved in and out of the Kennedy area, the Somalisa Concession and the Imbiza area whenever necessary.

We spotted Bubesi during a wildlife drive out of Somalisa Expeditions, having an afternoon nap under a tree. After a little while, he got up, stretched to his full, impressive size and padded slowly towards our jeep, only to lie down and promptly fall asleep again. Having taken lots of close-up photos, we left him to his catnap and continued our drive back to camp.

The next day, we headed out once again into Hwange from Somalisa Acacia with top guide Calvet Nkomo rally-driving through the park, at times with his arms in the air yelling “YEBO YES!”, towards a radio tip-off on the location of a coalition of lions, most of them Cecil’s offspring. We found nine of them resting atop a termite mound, looking regal, occasionally yawning and rolling on to their backs with their huge paws in the air. We parked up right next to them, but they barely gave us a second glance, being used to the sight of snap-happy tourists in 4x4s. However, this time it was just us and them.

We later drove on to an area of the park called Imbiza, recognisable by the many palm trees dotted about, which Calvet told us are not indigenous to Zimbabwe, having been brought over by Portuguese explorers in the nineteenth century. Here, we came across another pride of ten, again dozing on and around a termite mound. One particularly large lioness was collared and roaring mournfully. Calvet explained this was Stumpy Tail, the late Xanda’s mother, and suggested she was calling out for her lost son.

After watching a perfect sunset between two palms, we clambered back into the jeep to head back to camp, overwhelmed and content. Calvet, with his sixth sense for tracking wild animals and his flashlight held aloft, decided to take a different route home in the hope that we might see Bubesi heading towards his pride. Low and behold, the unmistakable shape of the big cat appeared in the beam of the torch. Wandering nonchalantly along the road right in front of us, he didn’t even flinch when we approached. We tailed him for a while, he only looked back at us once, until Calvet decided to overtake. He wasn’t moving for anyone.

The African lion population has declined 43% in the past two decades.

The report “Beyond Cecil: Africa’s Lions in Crisis,” jointly published by Panthera and WildAid, with Oxford University’s WildCRU, exposes the gravest threats that place the African lion in an ever-tighter race against extinction, and outlines a roadmap to save the species. 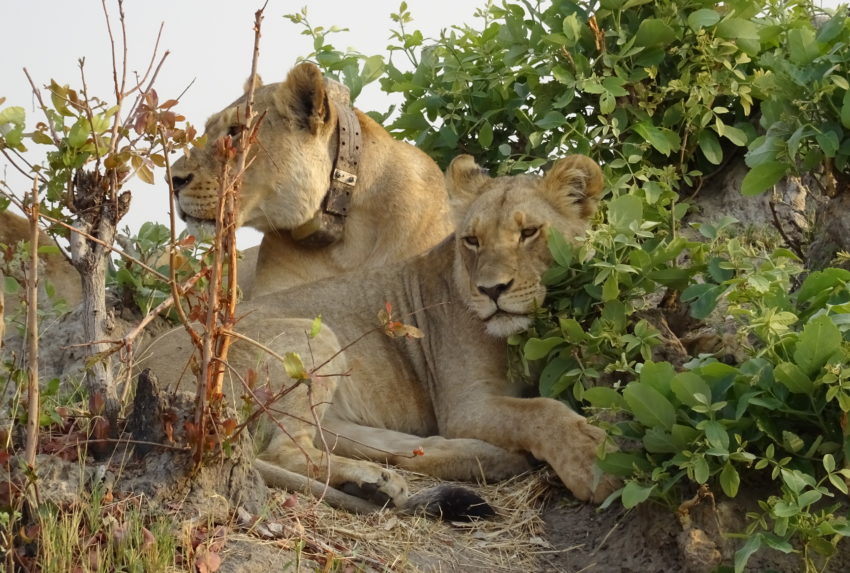