The cities of Asmara and Keren are located on the same Rift Valley plateau, and sit at an elevation of 2,300 metres. Asmara is Eritrea’s capital and lies 58 miles south east of Keren. Cloudless for the majority of the year, they share the same highland tropical climate. 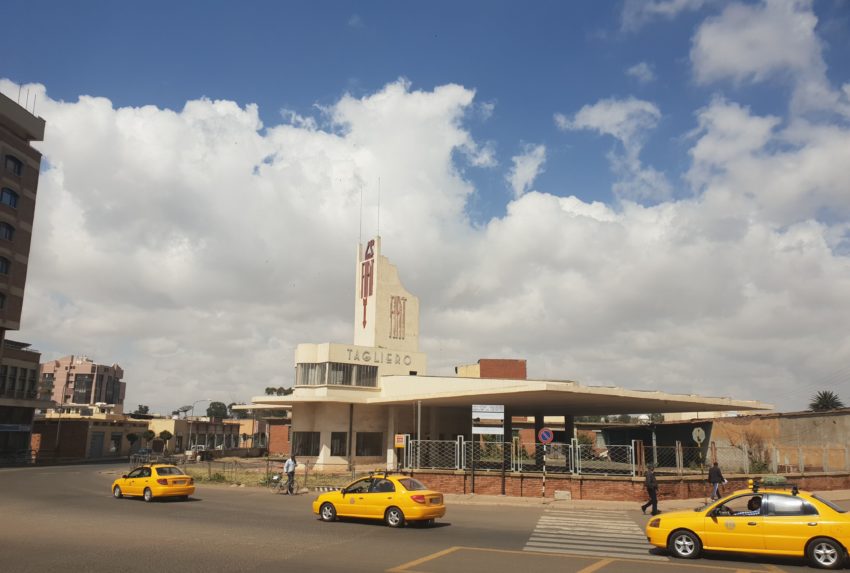 Once one of the most modern cities in Africa, Asmara has undergone little development since the 1930s. It’s architectural legacy intact, it provides much physical evidence of Benito Mussolini’s ambition to make Eritrea the launchpad for a so-called Second Roman Empire and remains a city-wide monument to Modernism. As such, and despite the fascist undertone, Asmara’s an architectural gem, it’s relative state of disrepair hardly surprising, given the country’s tumultuous history.

A beautiful city, Asmara is at first glance a very Mediterranean feel, it’s pace and its cafe culture reminiscent of Italy’s south. Dig a little, however, and it’s much more than this. Home to a rich mix of cultures, one that melds the relatively brief influence of the Italian occupation with age old religious practices, traditions and customs, it is very much its own place, a unique city, full of character, of charm, and of surprise.

Even so, Asmara is only just emerging from the effects of decades worth of war and a concurrent lack of development. Expect, therefore, intermittent electricity, unsafe water for drinking, and regular potholes in the road. It’s a small price, however, to pay for the opportunity to spend time in a city renowned for its cleanliness, its people, an ambience quite unlike anywhere else. It is, in short, a wonderful city to visit, it’s character far outweighing its various infrastructural problems.

Attractions include: the National Museum, where guests can obtain archaeological permits to visit dig sites in the rest of the country; City Park, a relaxing place, perfect for adopting city’s slow pace of life and watching the world go by with a beer or ice cream; the market, which takes place every morning except for Sundays, and is where Eritreans come to trade in spices and crafts from all over the country; and a night-time economy unfettered by cars, with locals taking advantage of the cool of the evening to walk, socialise and eat.

Perhaps even more beautiful, and certainly smaller, Keren lies to the north, and is where many local Asmarans go for their weekend breaks. Home to a number of famous graveyards, there is much history here, particularly of the twentieth century, it having been fought over by the British and Italians in World War Two, and then again by Eritrea and Ethiopia, between 1970 and 1990.

Given its tumultuous past, a key part of Keren’s attraction is the underground towns built as cover from Ethiopian planes during the latter conflict, which include a network of trenches and a hospital and college. Other attractions include its large market, plus a plethora of places to eat and drink and plenty of spots to sit and watch the world go by – something of a national pastime.

TO FIND OUT MORE ABOUT TRAVEL TO ASMARA & KEREN AND TO ARRANGE YOUR TAILOR-MADE TRIP, GET IN TOUCH WITH US TODAY