I was lucky enough to visit Lowis and Leakey Tented Camp in the Mara triangle last month run by Ninian and Lara Lowis.

There are many things that will astound one in such a place, but something I have a resounding memory of is the food. The Lowis-Leakey contingent are very, very good at their food. ‘We have a Malbec that goes well with this beef’, or ‘the Sauvignon Blanc is nice with this chicken’, seemed to be common phrases uttered at the dinner table situated in a remarkable spot on the edge of the Mara River.

You may think this standard, but hear me out. To get to the point of wine pairing is frankly extraordinary, given the remoteness of the camp. Everything is brought in when they pitch and if you’ve ever been camping, you’ll know that to cook anything but baked beans from a tin is miraculous.

‘We bought a Dutch oven’, Lara explains to me as I begin tucking into my lamb cutlet, cooked to my exact preferences, ‘which is basically a big metal box with two doors. We have just the right amount of coal burning underneath and sitting on top to make it the right temperature. It takes a while to get right, but our chefs are pros.’ James Kimathi, head chef at Lowis and Leaky has been with the family since Jamie their 18-yo son was a week old and so is like family.

Having grown up in Kenya and sent to boarding school in England with none other than Will’s sisters, Caroline and Anna, Lara made the decision to study social anthropology and law at SOAS (School of Oriental and African Studies) in London. On return home to Kenya, she found it almost impossible to find a job, since all jobs, even voluntary ones, required experience.

‘I called it my catch-22 problem. If you can’t get a job without experience, how can you get the experience in the first place? So I decided to write to all the NGOs I could possibly think of in this field in Kenya explaining my situation.’

Eventually at a meeting regularly held by some of these NGOs, the chairman of one such organisation read out the letter and asked if anyone else had received it. Everyone put up their hands.

‘So apparently they decided to draw straws right there and then and it fell to this Australian Lawyer of Operation Lifetime Sudan (OLS) with the Humanitarian Principles Programme, who was an amazing boss.’

The second Sudanese civil war was brutal and, lasting for 22 years, is one of the longest recorded in history. It had the highest death toll of civilians of any war since WW2 with about 4 million people being displaced by the end. OLS, which was a consortium of various UN agencies, had been established as a response to the devastating famine and lasting effects of the civil war.

Before too long Lara’s role evolved to became assistant information officer, organising press personnel and logistics for journalist trips going across the Kenya Sudanese border. After spending three years with the UN, she joined Ninian in 1998 when they had Jamie and they have been running safaris ever since.

Lara and Ninian, together with their children Jamie and Amelia and a whole host of staff, run safaris throughout the Mara triangle – it’s the non-tourist side given the fraction of bed nights available and comes highly recommended to anyone who wants a genuine camping experience, just with king-size beds, top-notch food, world-class guides and the highest concentration of large mammals anywhere in the world. 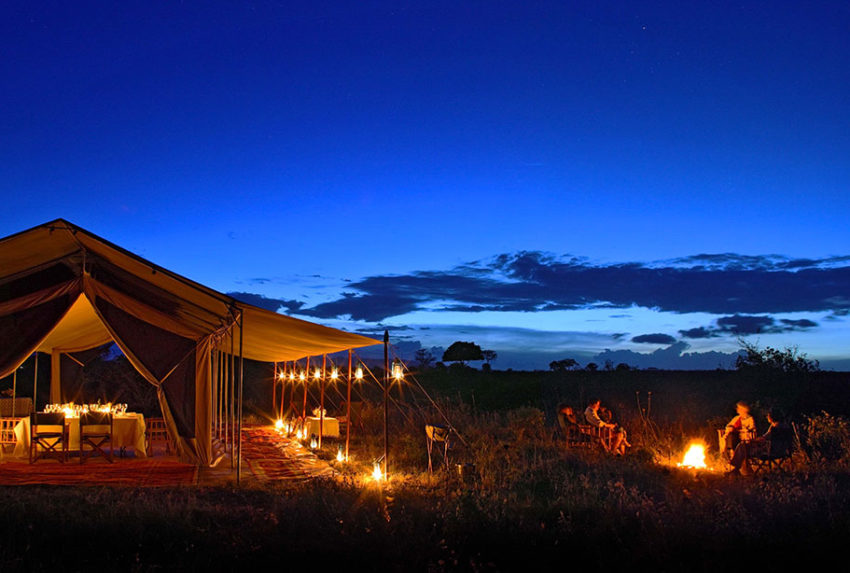