Just a quick note to welcome Jess Jones to the team and to share one of her many experiences when travelling the world, a three-year trip from which she has relatively recently returned.  After coming back and working a stint at a campsite in Italy, and running a pub in Essex, Jess joined us in the summer, and none too soon: her role in support of sales is vital, especially given the fact that JbD continues to grow, both as a company and in terms of the parts of Africa it continues to service.

Jess has had an already enormously full life, university, travel and work providing a range of wonderful experiences. Of these, I was especially struck by her love for whales. I identified immediately with her experience of swimming with humpbacks off Tonga, and was blown away by her account of helping in the rescue operation to save a large pod of pilot whales, stranded on Farewell Spit, South Island, New Zealand in 2015.

No one knows for sure why whales get stranded in large numbers. Certainly part of the clue lies in the places that strandings frequently occur, Cape Farewell being one, Cape Cod in Massachusetts being another. Each spot shares the same geological features, very gentle sloping beaches and long tides, the result a great stretch of shallow water. Whales are deep water mammals, and once trapped find it impossible to get back to safety. As to the vast numbers that do get into trouble, this is most likely explained, as Jess says, by the fact that whales are highly sociable, and will go to the aid of an ailing pod member. This is especially true of pilot whales, whose bonds are super tight.

However, the reasons why these highly intelligent mammals should ‘allow’ themselves to become stranded in the first place remains a mystery. Much of the research centres on what might be disrupting their otherwise excellent navigation systems, with everything from noise pollution to solar storms, which it is postulated may affect the magnetic fields the whales rely on. Whatever the truth, it occurs, and Jess was travelling the South Island in 2015 when she was notified via FaceBook of the stranding at Cape Farewell. It was 7 am and she would spend the next six hours in a team of four, looking after Momo, an adult pilot whale. ‘We met in the car park, and went down onto the beach. The first thing I saw when I arrived on the beach was some children pouring water on a baby whale. ’

Once stranded, a whale is on borrowed time. Outside of water, the whale’s skeleton is unable to cope with its body mass, the weight of which begins to crush its vital organs; it’s unable to regulate its temperature and begins to overheat; and it starts to die of thirst and of starvation. The aim is to keep the whale alive for as long as it takes for the tide to come in, and then to try to float it back out into safe waters. All of which is easier said than done: injuries and exhaustion mean some whales fail to float, while confusion and the aforementioned level of bonding sees others re-beach.

When Jess began to work with Momo, there were another 195 whales on the beach. Volunteers were organised in teams, assigned a whale, and those with wetsuits were then asked to help with floating the whales at high tide. As Jess explained, each whale was covered with blankets, which were continually soaked. On the advice of co-ordinating ‘Docs’, whilst others dug holes in the sand to gather water, and poured it over the whales, individual team members took turns to comfort them, either talking or singing to them.

Sadly, as is the case with strandings of this size, many of the whales did not make it. It was, as Jess reports, a heart rendering experience. She was there for the first day, before ‘swapping numbers’ with a wetsuit-owning volunteer. Of the 196 whales beached on Cape Farewell that day, just a third of the pod survived. Momo was one of them. 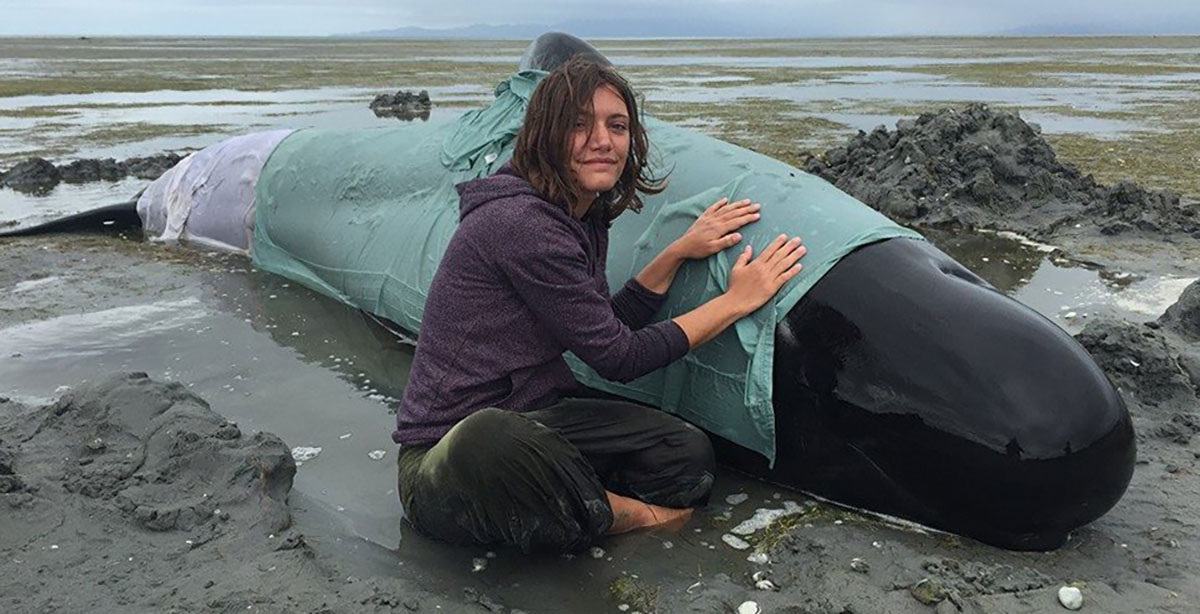