On Wednesday evening, after shutting up shop in the office, we strolled a couple of blocks down the road to Presuming Ed, one of many local coffee shops – incidentally the remains of an old bank. This one’s got the most bizarre décor – old N-64 controllers and vintage A-team magazines hanging from the ceiling, a giant Jaja Binx head wedged into a service hatch, half a car mounted onto the wall and chairs made out of old books piled on top of one another, any of which can be picked out and read. If you get the chance, do visit – or at least look it up. 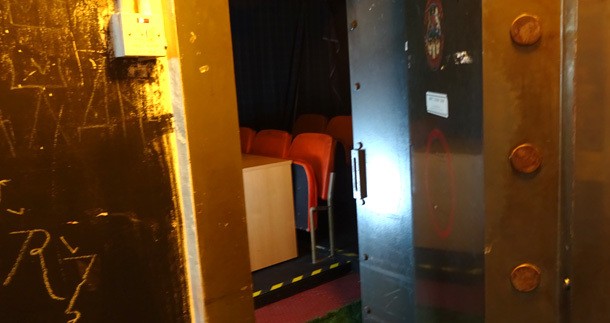 Serving great coffee, Presuming Ed’s become a regular stamping ground for the team. It also has a private cinema in the back. Set within the old bank vault, access is through the main shop and down a corridor lit up by a storm-trooper holding a neon-stick light sabre, and it was here that we watched the Virunga documentary, which everyone but Angela and I had seen many times.

We’ve already posted on the film, and in particular on the work of the park’s rangers. You will probably already know something of its story. If not, briefly: It’s is set in the heart of Virunga National Park, in and around the park’s headquarters. Melanie Gouby, a freelance journalist documents the under-hand corruption of an oil company that illegally tries to test for oil within park boundaries and records but a fragment of the challenges that the people of this area face daily.

Following the day-to-day work of the park’s director Emmanuel de Merode (as seen in change) and his team as they attempt to keep the surrounding villages and resident gorillas safe, the larger story here is the constant power struggle between the national army and the rebel force M-23, the aforementioned oil interests muddying already murky waters. Merode (incidentally, a Belgian prince), uses his collected leadership and extensive skill set to run an almost constantly trouble-stricken park. Both Gouby and Merode define what it is to be a true philanthropist.

This film has brought about considerable publicity into the park and funding and tourism opportunities. As in so many other circumstances, when an area is under constant and extraordinary pressure, it becomes easy for tourism to steer clear and to find a happy and peaceful alternative. We must, however, do the opposite in order to keep the local economy ticking. Far from DRC, but equally close to our hearts, the Ethiopian famine is an example of this claim – though some areas still undergo serious drought, the difference between now and 1985 is that tourism is thriving and as a result the cogs of the economy are whirring, putting the country in much better stead to tackle these hard times.

The main point: the DRC remains a gem of the highest order. Now enjoying a long period of stability, this is the time to visit. Though we currently only represent one property in DRC, one couldn’t ask for a better base. If you haven’t already, I highly recommend watching the Virunga Documentary and, all things going well, get in touch.