Yesterday I had a chance to catch up with Ben Morison, project leader of the Flip flopi project, which is due to set sail from Lamu in September 2018. A traditional Kenyan dhow built out of rubbish. The boat, created from molten plastic moulded into ‘wooden’ planks, will consist of 200,000 flip flops, and plans are for it to sail the 5,250 kilometres from Kenya to Cape Town in South Africa later this year.

Having spent many years enjoying the natural resources of Africa, through his personal and professional life, Ben felt the urge to give back, and through the Flip flopi project hopes to communicate the message about plastic pollution of the ocean to people who are not receiving it via social media and international press. Like elsewhere, the source of the problem in the African continent is far, far from the ocean, upstream in the mountains and in the deserts, where some people may never have seen the ocean, let alone watched Blue Planet. How do we communicate the environmental issue to people with limited access to channels highlighting the problem? Especially as they are still fairly new to convenience of readily available tap water, and even more, the apparent luxury of plastic bottled water.

It’s Chief Boat Builder, Ali Skanda, is leading the local team of Kenyan craftsman and recyclers. Born into a family of carpenters and dhow builders, Ali is passionate about preserving the ocean and its marine life. ‘I thought it was a crazy idea, and then, when I awoke the next morning I decided: everything is possible.’ And so it is: Flip Flopi is now in its final stages of construction. The immediate ripple effect has already been felt, with Ali and his team becoming local celebrities and respected within their local and boatbuilding communities. People have also begun constructing houses with recycled plastic.

It is hoped that as the boat sails along the coast of East Africa, people will be drawn to their local beach to come and look, to hear its story, to ask questions, and to find solutions. Dhows have been used for communication for hundreds of years. How fitting, therefore, that the Flip Flopi will travel with this ‘spreading a message’ mission in mind. Ben finishes by saying, ‘we want to make people pause, to make people smile, when people are having fun, they’re open to engagement.’

Few will be able to resist the charm of a multi-coloured, flip-flop covered 18-metre sailing boat. Thank you, Ben, and the Flip Flopi team. You’ve educated and inspired me, and what a lovely reminder that everything is possible, and to smile – it speaks a global language! 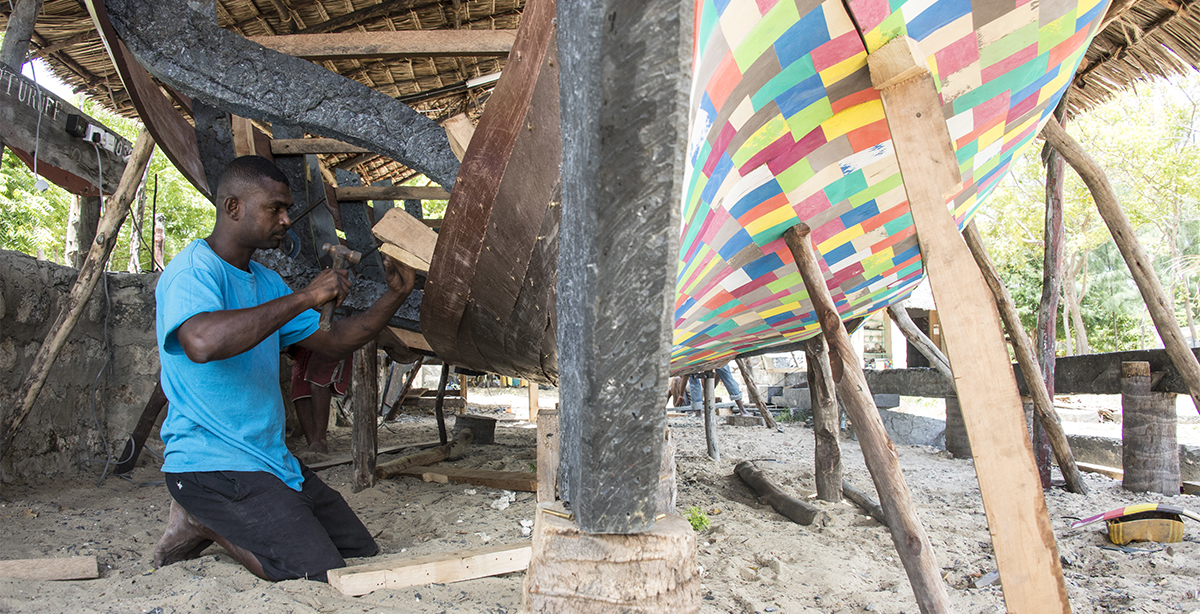