One of the things we always ask of returning guests is that they let us know how the trip went. It’s important. The most recent visitors, they’re the experts, and are a rich source of information on everything from lodge to guiding to what to expect in terms of the experience as a whole. I’m extremely grateful, therefore, to Steve Almond, whose wonderful diary entries served as his feedback on a trip he took along with his family earlier this year. Steve and Claire and their now grown-up children travelled to Botswana, and stayed at Kings Pool, Duba Plains and Jacks Camp. A huge thank-you to Steve for agreeing to share the following excerpts – a rare and entertaining window onto animal behavior, habitat, and the importance of excellent guiding.

Kings Pool, Linyanti
‘The camp faces the River Linyanti and looks across to Namibia. Beyond the river, the area is mainly bush, heavily populated with mopane trees.
Most commonly seen wildlife: impala and warthog
Birds most commonly seen: hornbill and starling (but not Wattled Starlings)’

‘A morning of true drama, all within striking distance of the camp.

‘Having stopped to observe two juvenile bateleur eagles, we were advised by one of the other vehicles that wild dogs were in the neighbourhood, on a kill. As we approached, we found two spotted hyena waiting to have a go at the carcass after the dogs had finished with it. Ten wild dogs were nearby, on the carcass of a male impala. We had seen tracks of the female leopard in the camp again so it may be that the impala was the leopard’s kill and she had been chased oﬀ by the pack, or it may have been the pack’s own kill. The pack included only two cubs. Fanie (the Almond’s guide) told us there had been ten cubs but lions had found the den and killed five and a subsequent lion attack killed a further two and fatally injured a third. Only the alpha male and female breed and do so only once a year so they will have to wait to try to expand the pack again.

‘Once sated, the dogs slowly loped oﬀ for a drink. They then socialised and played with the cubs, oblivious to us, even chasing each other up to and under the vehicle. Once they settled under a bush to rest, the hyena ventured forward. One decided not to risk going to the carcass, either because the dogs were still quite close or because it was subservient to the other hyena. Soon after the latter started feeding, two of the dogs started advancing with heads down and ears back, quickly joined by two more, and the hyena moved oﬀ smartly. In the meantime, a tawny eagle waited atop a nearby tree, with three Go Away birds perched lower down, emitting the call that gave them their name. Two big male warthogs grazed a little way behind the carcass, seemingly oblivious to the drama. A baboon group watched proceedings from the tree they had roosted in.

Slowly the dogs settled again and the hyena returned to use its incredibly strong jaws to crack the bones of the impala, something the dogs could not manage.’ 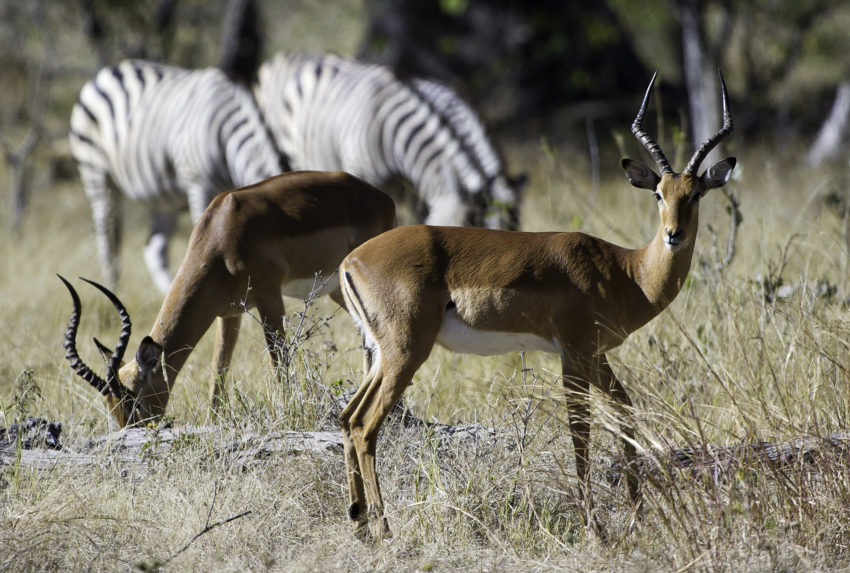 Duba Plains, Okavango
‘The camp is situated in the wetlands, requiring us to cross log bridges to access the main concession area and navigate a lot of flooded tracks and wetland plains.
Most commonly seen wildlife: red lechwe antelope and warthog.
Most commonly seen birds: lapwings / plovers and wattled starlings.’

‘Huge elephant prints immediately outside our suite told us there had been activity in the camp during the night. It was a surprisingly cold morning, and we encountered several elephant in ones and twos in the first hour of the morning wildlife drive, staying in or very close to the bushes, which may have provided some shelter form the bitingly cold wind.

‘We also saw a group of four male kudu and soon after a mixed group of a dozen females and young males, bearing horns not yet with a full twist. It takes around two years for a full twist to form. A third sighting of kudu comprised two males, accompanying a Baboon troop to a Sausage Tree. Kops (the Almonds guide at Duba) explained that kudu often wait beneath a sausage tree for baboons or monkeys to take flowers to drink the nectar then drop them to the ground where the kudu eat them up – similarly with the seeds of the jackal berries from the African ebony tree.

‘We then managed to find a single lioness and her two cubs, hidden in the bush resting. Also a member of the Tsaro Pride, Kops explained that lionesses with young cubs will often remove themselves from the main pride and fend for themselves, focusing on small prey. This is because, unless the kill is large, such as a buﬀalo, competition for food within the pride may mean the cubs don’t get a look in. They also tend to hunt in the day, meaning less competition from other predators and also allowing them to stay with their cubs during the night when predation risk is at its highest.

‘This lioness has a sister, with even younger cubs who had also separated from the pride.

After a while, the mother roused herself and moved oﬀ, leaving us to observe the cubs sitting on a log. She proved elusive when we tried to follow her a few minutes later. We headed to a nearby very large open plain/ wetland and it was a small group of tsessebe antelope that directed us, as they all faced the same way, eyes focused on the lioness, striding into the plain. She ignored the hundreds of red lechwe scattered across the landscape, in the knowledge she had no chance there, and moved methodically to each small dry mound with vegetation, checking for baby lechwe that had been left hidden there. No luck, but after a while she spotted a baby some way oﬀ that seemed to be struggling to keep up with its mother. She went after it, happily ploughing through the water and soon caught it. She then spotted another baby, trying to hide in the grass just a few paces away and ambled over to take that as well.’

She lay one on top of the other and seemed to be debating with herself what to do, before taking one kill in her mouth and walking all the way back to her cubs with it. Kops said this was unusual behaviour, but she could be confident that the second carcass would be there, left disturbed when she returned for it later. She rested while her cubs tussled to break into the tough skin of the small carcass and probably returned to the other kill for her own breakfast later.’ 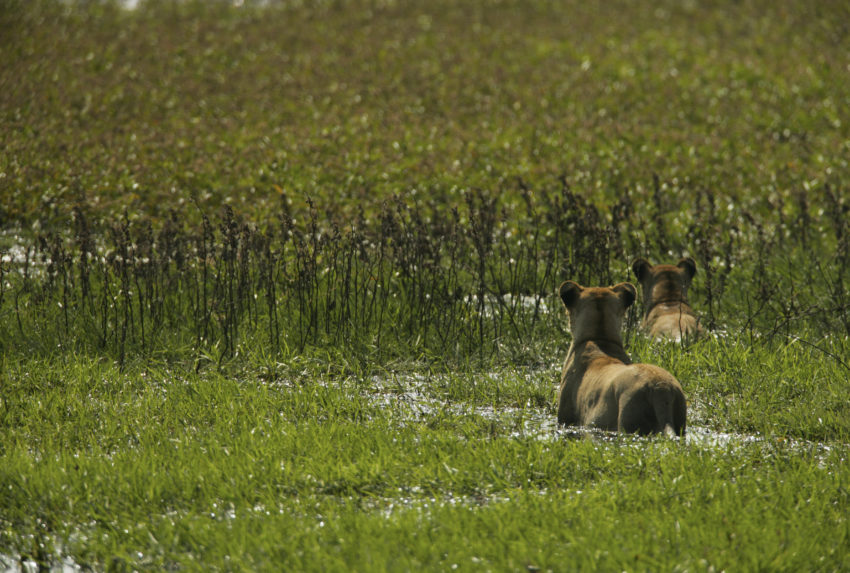 Jacks Camp, Makgadikgadi
‘An isolated camp in one of Africa’s most isolated areas, dominated by salt flats (‘Pans’) with big open plains interspersed with areas of bush, featuring acacia (camelthorn) sporting huge thorns and coming into spring yellow blossom.
Most commonly seen wildlife: zebra and wildebeest.
Most commonly seen birds: northern black korhaan (known as the Helicopter Bird because it flies with its legs lowered and resembles a chopper when it comes in to land) and red billed quelea.’

‘This morning we flew south east to Jack’s Camp. The short drive from the local airstrip quickly revealed a very diﬀerent environment, being the semi-arid plains of the Kalahari desert. Most of the country (the size of France) falls within the Kalahari, the deep white sands of which explains why the country is also mostly very flat.

‘We were surprised to find ourselves in a few minutes on a big open plain with a multitude of zebra and wildebeest, together with springbok and a few ostriches. In the centre was one of several solar powered bore holes that the camp had dug, attracting a lot of wildlife to drink.

‘At another smaller watering hole close to camp, we saw hosts of numerous red billed quilea putting on a show, swooping in their thousands to drink and swerve away before danger could strike. Lappet faced and white backed vultures looked on from atop the surrounding trees.The camp had experienced late rainfall the previous season such that the salt pan in front of the camp that vehicles normal drive across at this time of year still held rainwater, with significant numbers of greater and lesser flamingoes.

‘For the evening drive we went out onto one of the very big salt pans where we learned something of their history over sundowners. In short, the three major rivers of the north, Zambezi, Okavango and Kwando/Linyanti/Chobe, originally converged as they headed south into one massive river, 8-12 kilometres wide, that ran through the rest of the country and down to the coast of Mozambique. Some seven million years ago, tectonic plate movements created a ridge to the south interrupting the river’s flow and creating a vast lake, some 300m deep at the point we were standing, 50m above our heads and 250m below. A couple of million years later, further tectonic movement created a ridge to the north, causing the lake to dry up over time, leaving the salt pans, and creating the Okavango delta to the north. The mixture of vast quantities of water from the river and the lake with oxygen lead to the evolution of a vast range of vegetation and animals – including eventually Homo sapiens. It was quite something to think that the barren salt flats where we stood played such a significant role in our own history.’ 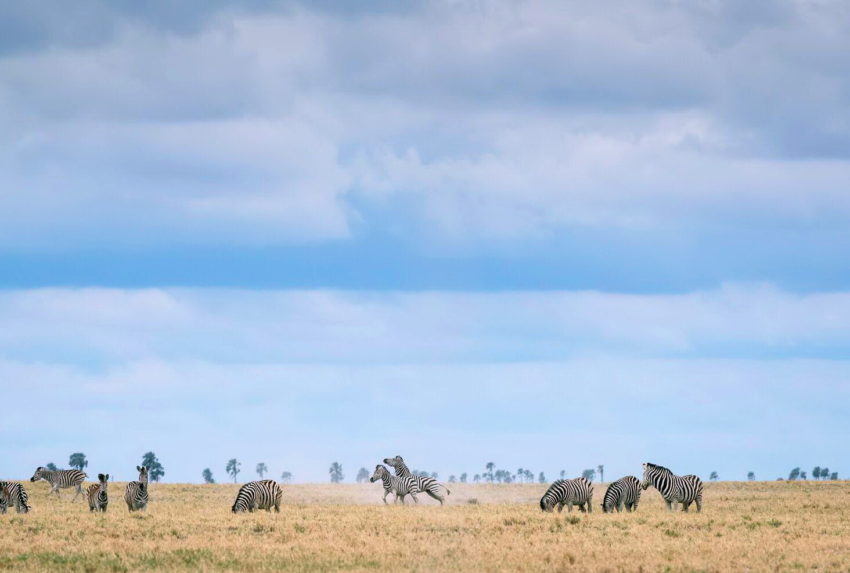 On which final, historic note, another big thank-you to Steve Almond for sharing his diary with us. It really does give a fantastic insight into the importance of trips being hosted by excellent guides. If you’d like to hear more, or would like to travel to Botswana, and to the camps and areas visited by the Almonds, please do get in touch.