I make no apology for the number of welcome-to-the-team blogs lately. I’m aware it’s not the first this month and I can’t promise it’s the last, such is the nature of Journeys by Design currently – we seem to have almost inadvertently doubled in the last two years.

In no way fazed by the often-boisterous jollification of our growing team, Sam Tinkler, Chris‘s partner, arrived this month, having moved from Ruaha after managing Jongomero for three years. Do have a read of Chris’s blog for a catch up on all of that. In the meantime, I welcome Sam to the stage, born in Leeds, England, brought up (from the age of four) in Johannesburg, South Africa.

‘My Dad got work there, so after me, my sister and my brother were born in South Africa. You can imagine being there 30 years ago, there was a lot of very open countryside with fields and beautiful big skies. It was a great place to grow up.’ Sam’s parents, similarly to Chris’s, were great lovers of the bush. So, while everyone else was having a beach holiday in Durban, Sam was off exploring the far reaches of the Kruger each summer. ‘We would do weekends in Pilanesberg which is a little national park about an hour from home and then in summer go further afield to the Kruger.’

Having schooled with Chris in many of the same classes, they subsequently lost touch as Chris went off into the wild to learn guiding and Sam undertook a secretarial course for a year. ‘Part of the course,’ Sam explained, ‘involved a placement in industry. I ended up covering a string of maternity leave for this mining project management company and long story short, they liked me enough for the managing director to hire me as his PA.’

Sam explained the company’s work on mine sites throughout west Africa, her job, the logistics of travel for her colleagues, suppliers, labourers and supervisors to various mining sites over West Africa. ‘It was quite interesting, working out how the logistics of getting large groups of people to these remote places I couldn’t even spell. It took a huge amount of research for that side of things. I worked here for 13 years until eventually Chris and I met when he started working for &Beyond in Johannesburg. We both lived in Edenvale, a small town in Jo’burg, about five minutes from each other, got chatting in a shop one day and the rest is history. We dated for a year while he was the international sales manager for &Beyond, before getting engaged and married.

‘I was lucky enough to tag along to the end of a fam trip in Kenya. We went and stayed at this camp where Chris knew the manager, so they put on this surprise wedding blessing for us – all the Maasai came out running at us – it was terrifying – and started dancing around us doing their throat guttural singing. We had to dress up in traditional garments and I had a bridesmaid. We even got Maasai names: mine is Nolari (meaning ‘after the rain’) and Chris’s is Lemayen (meaning ‘one that is blessed’). Because we didn’t have any family there, we were given families to go through all the Maasai rituals with them. I remember Chris going into a tent with my pretend Dad to barter down the cow dowry for me. It started at 25 cows, but he managed to get it down to 10. Not bad!

‘A little while after that we talked about getting back into the bush. We put out the feelers after I took a training course in lodge management and Kenya came up.’ The first property Sam and Chris managed together was Encounter Mara in the Naboisho Conservancy on the edge of the Mara Triangle. Now run by Asilia, the Naboisho is a private concession that sits along a number of others as a stronghold for wildlife surrounding the Maasai Mara like a belt.

‘It’s very different working and living in a camp compared to working in a city where everybody goes home to their private life. It was very traditional and male run there. I was the only female there so had to get used to that.’

‘The only reason [for the fact that I was the only woman] was that we were about a five-hour drive from the village. It’s not that the culture thinks men should work and women shouldn’t. When I say ‘traditional’, its more because it’s so far from the village, the women tend to stay and look after the children and livestock. A lot of our guides’ wives had their own businesses back home setting up stalls selling things like jewellery. They didn’t want to be as far from the village, because they basically run the village!

‘Even that’s changing though. The safari industry in the past has been typically male-dominated, but now as well as seeing women hosts, chefs and spa managers, we’re seeing women guides, which is huge.’

After a time at Chem Chem in Tanzania Sam and Chris then went back to Kruger National Park to manage the Outpost, which, Sam told me, was actually mainly female staff because of the proximity to the village.

‘It was very different from Naboisho. The north part of the Kruger is very untouched wilderness; the landscape looks completely different from how it is from the road, so you get a lot of hidden parts that you have to physically explore by foot to discover. There are open plains and gorges and forests with the most phenomenal bird life and picturesque landscapes. Because it was a private concession we were free to explore all over.’

‘After that was Jongomero in Ruaha, which again just felt so remote. You could walk all day and not see a single other person. We used to have a lot of elephants around camp because there’s no fence, so a lot of the action was back at camp. One morning a staff member came into the office looking pale and told us ‘there’re lions in the main area’. He had walked down early to check it was all ok before the guests got up, walked into the main area, and came face to face with a lion. Fortunately, he got away, but the lions did come back a few times. All the staff kept joking that they were coming back for him.’

‘It was some of the small wildlife that I preferred though. We had a rubbing stone that we’d fill with water during the dry season – mainly for the birds – but would see all sorts coming to use it: vervet monkeys, baboons, we had a little banded mongoose, even impala. One of my best experiences in camp was when we had just walked home. It was a normal evening, the sun had just gone down, all the impala were scattered around in front of the tent and we saw this mongoose-looking thing running around. It was a white-tailed mongoose, which you don’t see much at all around there. We stood completely still and it came right up to us. It knew we were there but it didn’t see us as a threat so after sniffing around for a bit, gently trotted off again.’

As this story tells, often the best parts aren’t seeing the big five, but the unexpected, remarkable encounters that catch you off guard. These can’t be planned for in wild Africa; the best we can do is keep our eyes and ears open.

So, after spending three years at Jongomero, Sam’s story, along with Chris, has brought her here to Journeys by Design – a new adventure entirely – where her work places her alongside the ever-growing sales team. What an absolute pleasure it is to have her here. If you’re interested in planning a holiday to Africa, do get in touch with us. Perhaps you’ll be lucky enough to speak with Sam. She may even tell you more of her remarkable story. 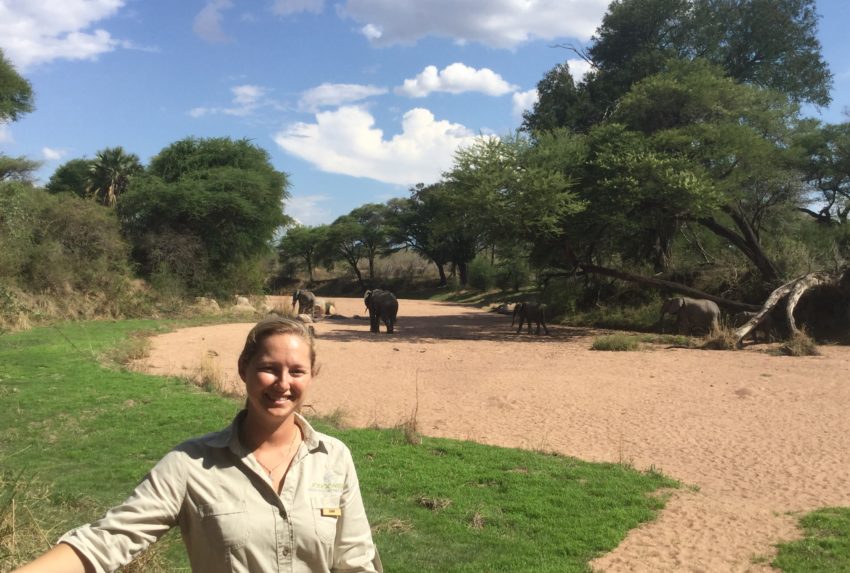 IF YOU WOULD LIKE TO FIND OUT MORE ABOUT OUR TEAM OR PLAN A JOURNEY, GET IN TOUCH