You may or may not have noticed three things, all of which are more or less covered in this blog:

So, maybe this is a good time to let you know that we’ve decided to open a café on the ground floor of our building. We could’ve built a bigger office, to accommodate our ever-growing team, but where’s the fun in that? More on this another time, but in short, it’s a community café, which will use income for Wild Philanthropy. This is the point of connection between Brighton and the communities we work with in Africa. Two people in charge of the café are Laye Dieng and Monique Mbena.

I had the chance to catch up with Laye, sitting in the window of our café. It is a wonderful place for people watching. We haven’t opened yet and so had the café to ourselves. It was one of the hottest days of the year, but the air inside was cool and I found myself flicking through pictures of Laye’s latest coffee art.

Laye’s story, which started in Dakar in Senegal, is certainly a teller, but to understand it I’m going to bring you to the present day. The way I know Laye is fortuitous indeed. You may remember Caroline, Will’s sister, with whom I occasionally catch up to hear of her latest adventures. Caroline met Laye on the sea front in Brighton one day six years ago, when he was living underneath a boat on Brighton beach and asked him to come and live with the family.

‘I was brought up in the ghetto in Dakar. It was a good life, I have five brothers and four sisters. I used to run away from school because I hated it and go fishing or catching rabbits or something and drove my dad crazy. When I was thirteen, I started travelling around Africa, touring around places like Mali and Gambia to play music on my own – I play lots of instruments, but mainly the djembe drum.

‘Then, when I was a bit older, I started playing the djembe for a big band in Senegal. The band is very well-known in Senegal – you have to be very good to travel as a band and we used to travel lots. When I was 22 years old we had a gig in England playing at Glastonbury. Even though we were successful, the singer was a dodgy guy and used to keep all of the money.

‘So, I said to myself, the next chance I get, I’m going to stay in England. We had a gig in Brighton a few days before and I felt so much love for that city, on the last night before going back to Senegal, I just walked away. I didn’t have a visa and didn’t know anyone in England, so ended up rough sleeping under a boat on Brighton beach.’

This was not the summer, but November, and thus ensued one of the harshest English winters on record (you may remember the famous picture of ‘snowball Britain’).

‘Each morning I’d wake up, wash my face, ask for water from a coffee shop and go and try to get a job. It was tough. I used to wash cars, I sold Senegalese clothes on the beach and made jewellery out of spoons, I was in a band and things. Remember that guy who used to sell bubbles on the pier? That was me! I made good money.

And people were very good to me. I was sleeping rough for three months, but people kept asking me to come and live with them. That’s when I first met Caroline.’

Caroline told me about when she had first met Laye. She was with her friend who was visiting from South Africa and she, who is from Eastern Africa, bumped into Laye, who is from West Africa. It seemed a poignant moment.

‘Caroline came to the coffee shop with George, who was a baby and he kept crawling up to me. So, she started talking to me and she asked me where I was from and my story. We were talking French together because I didn’t know English and she said, “My husband, Mike, would love to see you. He’s in a band too” and she wrote a number for me to call.’

‘I didn’t call her for a long time though. I didn’t have a phone. When I did, she said ‘We were waiting for you to call!’. They invited me over and I went and met the family. And then started living with them and looking after the house when they were on holiday. Then Polly was born and I looked after her when she was a tiny baby. They’re like family.’

George and Polly look up to Laye in the way that only a little brother and sister do.

‘Caroline and Mike introduced me to a lot of their friends and I started getting to know more people. I still had my businesses on the side, but looked after other people’s houses and kids for them. I have always met good people in England. I was even a bouncer for a long time and even then, no one has ever tried to start a fight with me.

‘Then I applied for a visa for two years and got a permanent visa. I can stay here for as long as I want now. I stayed in touch with a lot of people I met during my time on the streets and they can’t believe where I am now. I’ve had a good life in England. I’ve been here ten years now and been sending money back to my family ever since. My Dad is proud. My family has rebuilt the house. I have helped my brothers and sisters to go to uni and get jobs and travel. And now they can help support the family as well.’

As previously said, to add another string to Laye’s bow, he’ll be the face of café, head barista, inviting in the vast and diverse connections that he’s made through the ten years he’s been here. More on that soon, but for now I just want to thank Laye for sharing his story and to say, from all of us at Journeys by Design and Wild Philanthropy, welcome! 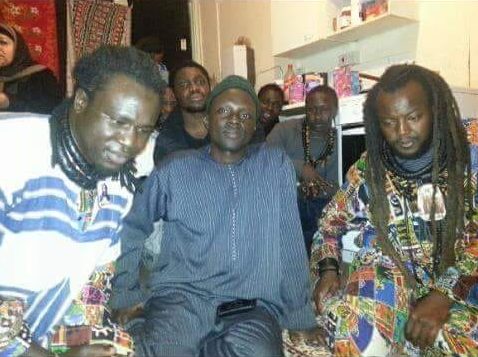