You may remember that each year the team at Journeys by Design head out for our annual catch up. For as long as I’ve been a part of the company, these outings seem to get evermore enjoyable.

Four years ago found us tossing a caper and playing the bagpipes at Scotland’s Blaire Estate. Three years ago we were learning about the behavioural ecology of chimps at Aspinal’s Park and using what we know to build effective teamwork. Two years ago it was massages at local stately home, Stanmer House. And last year was a safari through Knepp’s rewilding project in West Sussex.

What could match these was up to Rosanna, who has temporarily taken over from Maddy as organiser-in-chief. A baptism of fire, and one which she passed with flying colours. This year we visited the little village of Firle, not far from Lewes, for a day of foraging in the South Downs National Park, which was led by the School of the Wild.

The day started with presentations. How are we doing as a company from the point-of view of both measurable and immeasurable indicators? Turns out quite well on both fronts. Will pressed the matter that, ultimately, it’s the relationships that we form that bring about a strong, cohesive company. People first, business second. I’d tend to agree. And from a work and play perspective, I believe Journeys by Design does rather well.

We were treated to a delicious lunch afterwards at Firle’s famous Ram Inn. Paul C swears this has got to be up there in his favourite pub gardens and food in Sussex, and after experiencing it for the first time I think he’s right. ‘You should come here for the festival,’ he suggested, throwing a ball for Ella, the office Labrador who had come along for the ride. ‘They have some lovely ales. There’s one called Burning Sky that’s brewed here in Firle.’ Given the size of Firle, an incarnation of the very definition of a quintessentially English country village, this is quite a feat. ‘They have a load of bands and guest ales in and everyone’s pretty merry!’

Later, we met Jane and Lucy from the School Of The Wild, who after a brief introduction to foraging led us around and out of Firle, where thus we began our afternoon of foraging – an adventure into the natural larder of the countryside.

‘About 80% of what you see around you now is edible,’ Laura told us, munching on a stem plucked from within the hedgerow. ‘Whether it’s immediately palatable is another question, but you’ll find that a lot of this can be made into cordial, mixed into curries, blended into smoothies, stirred into cocktails or strained through tea. It really does open up a new world of culinary possibilities.’

I have to admit I was sceptical at the beginning, but I can definitely understand what they meant; my own cooking seems to have reached a point where every ‘new’ recipe seems to generally taste the same, limited by my small spice rack. Though not everything I tasted was nice and, in some cases, was pretty damn foul, I could picture using some of the bizarre things we tested to add another dimension to my culinary repertoire. ‘There are also nutritional qualities in lots of these plants that you can’t replace with supermarket supplements. For example, ‘the iron found in nettles is phenomenal,’ Jane added as she began casually rubbing a bunch through her jumper to get the stingers out.

‘Our food is so processed these days that even produce that’s widely accepted as good for you, can do more harm than good.’ My mind wandered to a childhood memory of trying to persuade my mum that toffee apples are good for you. I remembered a tale that Frankie told me about Ethiopian bread: she can’t eat bread in England; she is gluten intolerant. In Ethiopia, however, even eating bread by the truck load, she wasn’t affected. The conclusion: processed flour and food really changes in quality and nutritional value. The lesson? Read the packet, buy local produce, and eat organic food.

I digress. Once again, like last year, our away day was one of a string of perfectly beautiful days that we’ve enjoyed in Sussex of late. The South Downs were alive with vibrant colour, the sound of birdsong and classic farm-y smell of the countryside.

After trying everything from honeysuckle and nettle leaves to rosehips and lime tree flowers, we ended our walk with a quiz. Sad to say the other team won. Happy to say we deserved to win (obviously). We spent the rest of the evening relaxing and chatting the time away with a few rounds of local brews. I’ve said it once and I’ll say it again: we’re lucky to live where we do. I recommend a visit to the South Downs, one of the greats among the national parks of England. 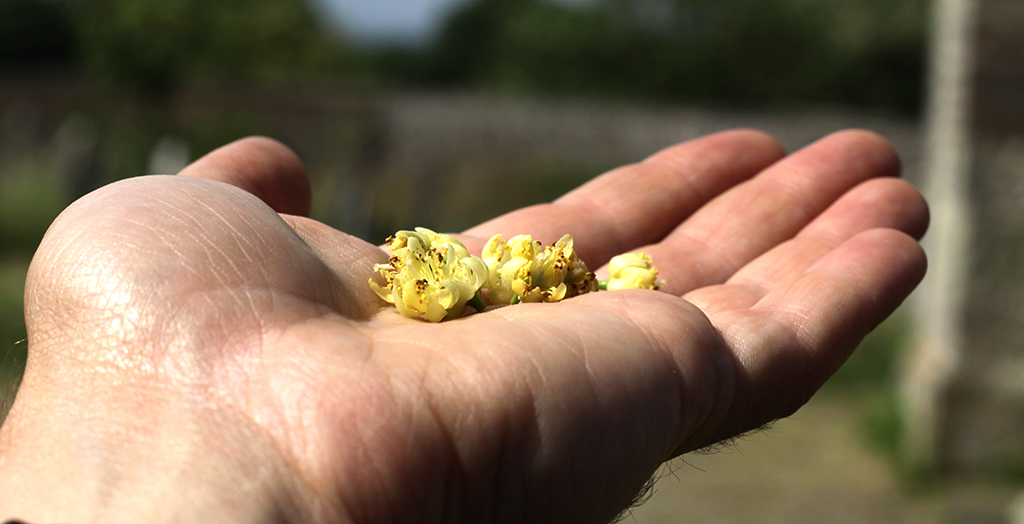