I used to run a book club or study group or drinking social night – call it what you want. We would meet once a week. The reason for meeting was social, but the underlying aim was to take a country that collectively we knew close to nothing about and to discuss it. Between us, we’d cook and share food and drinks from that country, listen to popular and traditional music, research and talk about its history and culture and sometimes invite a guest speaker who had lived there to share their story. The country we chose would normally have a link to someone in the group. We covered Yemen, Mali, Sri Lanka, Seychelles, Palestine and Sudan, North and South.

‘Did you know,’ I remember my wife explaining with great interest on Sudanese night, ‘that South Sudan is the world’s youngest nation. Did you know that Sudan has more pyramids than Egypt and it’s thought that the world’s first civilisations came from this area.’ She continued: ‘A haboob is a Sudanese sand storm that travels fast and covers everything in its path; sometimes it makes it feel like night time.’ Further into the evening and we would learn that haboobs are the least of Sudan’s problems.

This morning I read a BBC story entitled: ‘South Sudan war: The handshake that may end a recurring nightmare.’ It told of the shaky relationship between the President Salva Kiir and ex-Vice President Riek Machar. ‘Will the killing stop?’ The article asked. Two things I should mention at this stage:

Sudan as a whole, as we learned at our book club, is home to some of the world’s great ancient civilisations. Archaeological evidence tells us that Neolithic cultures settled along the Nile. They were hunter gatherers, fishing communities and some cattle herders. By the fifth millennium BC, the drying of the desert brought with it cultures from all over the Sahara region. The mix of population resulted in social hierarchy, the formation, even at this early stage, of civilised society, and eventually, over the next couple of millennia, the Kingdom of Kush, which was followed by many other famous civilisations. No wonder, then, that Sudan, taken as whole, is a melting pot of different cultures.

Since the time of British and Egyptian colonisation, which ended in 1955, there has been rift between the predominantly Muslim people of the north of Sudan and the mainly Christian people in the south. After Sudan gained independence from the British, the divide between north and south grew ever more entrenched, the balance of power firmly in the hands of the north, the government in Khartoum in the hands of a small number of elites.

The desperate needs of the Sudanese people were ignored by those few in charge, who largely used their posts to exploit natural resources – oil, gold, iron, tungsten – of which Sudan is rich. The result was two civil wars, which lasted decades. In 2011, after a referendum, over 99% of the people of South Sudan voted for independence and the world’s newest state was formed.

Unfortunately, while during previous wars the people of the south had pulled together, putting aside differences based on ethnicity, the alliance that resulted in Dinka, Salva Kiir becoming president and Nuer Riek Machar becoming vice president began to break apart. The reasons for this are many, though tensions were exasperated by the fact that warlords and partisan army generals had achieved positions of power. Meanwhile, the international community who had supported South Sudan in their bid for independence effectively stepped away in 2011.

Over the years, political fights – which started with hate speech – transformed into violence perpetrated by opposing ethnic groups, which escalated into all-out military conflict. In the first week, when loyalists to their respective sides took up arms, 1,000 people were killed and 100,000 displaced. Since then, things have only gotten worse, the violence fuelled by a heavy flow of weapons from other nations.

To return to the aforementioned BBC article. Last month, the two leaders of the opposition met up and shook hands to discuss a ceasefire deal. Despite this, the fighting continues and people continue to flee the country. South Sudan remains a UN Level Three Emergency. According to the Global Peace Index 2018, the country remains extremely unstable, and sits at 161 out of 163 countries on the Index. The outlook is bleak and – if it continues down this road – experts have said that we could see a repeat of the Rwandan genocide.

However, and to end, a small triad of hope:

1) I read an article recently about an organisation called Search For Common Ground. The idea is simple. Using communications, face-to-face and digital, they aim to get normal people from both sides to find common ground. So much of the war has relied upon lies of hate conjured up by the leaders of the Dinka and Nuer, causing animosity between members of the tribes of both sides, who have nothing to do with the conflict.

2) UNICEF continues to do unrelenting work to provide aid for both those that stay and those that have fled. UNICEF’s Executive Director Henrietta H. Fore, who visited South Sudan earlier on this year, writes:

‘I met a mother who had to walk for days to get treatment for her malnourished baby. I spoke with a young boy who was forced to join an armed group at the age of 10. I also met two siblings who were separated from their parents when fighting broke out in their town, Bentiu, in 2014. But amid the horror, I saw signs of hope. The malnourished child is on her way to recovery. The former child soldier is back at school and aspires to be a doctor. And today the two siblings were reunited with their mother for the first time in four years.’

3) I spoke to Allen Jones, who spent many years in Africa, working for the UN World Food Programme. After some consideration and regaling a brief synopsis of those he knew in South Sudan, including the mother-in-law of Riek Machar and the ex-British ambassador there, he told me some of the things that he was hopeful about.

‘Eritrea and Ethiopia were locked in an equally idiotic hostility for decades and they’ve just declared peace. Ethiopia has a quite big influence on the goings on in South Sudan. Perhaps with the focus away from Eritrea, the new Prime Minister, who I’m told is young and progressive, will turn his focus towards South Sudan. The oil is good. Of course, this can be a double-edged sword, but if there is some agreement in future, this will be important asset to the country. The second largest land mammal migration happens in South Sudan. The white eared kob goes from between the Sudd and Gambella in Ethiopia. I flew over it once and it reminded me of the Okavango Delta. ’

There is always hope.

For more information on Search for a Common Cause please visit their website. If you would like to donate to UNICEF, please click here. For anything else on Sudan, north or south, please do get in touch. 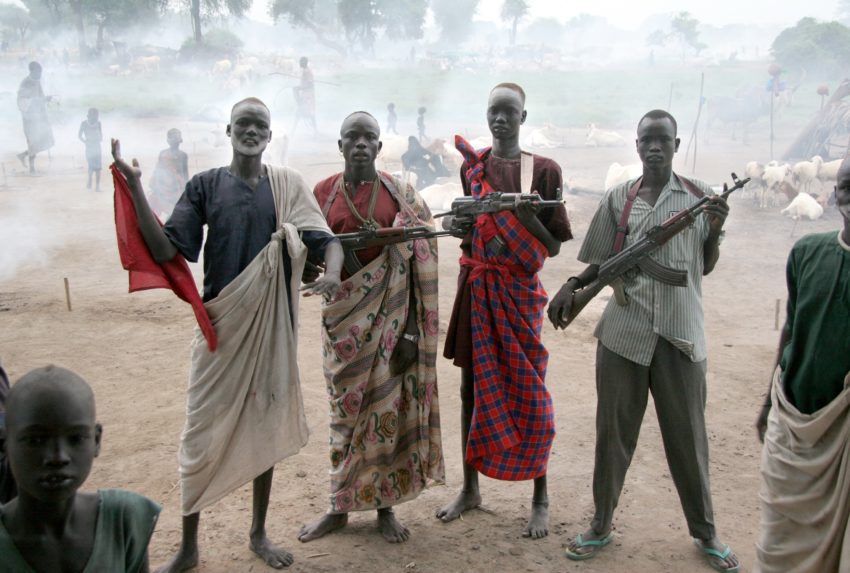