I’ve known Lucy for the best part of a year. I say the best part because her coming into the company seemed to have filled a significant gap, prodding the marketing department into an all rounded, well-oiled machine.

Let me explain: you may remember a year or so ago when we decided to take on the magnanimous task of creating a new website – a task under my responsibility. A few months in and the walls of digital content marketing began closing in. That’s when Lucy stepped in as a summer intern, tasked with helping me edit the remaining 5,000 pictures to go on our new website. In hindsight, asking someone to edit and upload this vast figure in just four weeks is ridiculous. But she plugged away until it was done. I think you’ll agree she’s done a superb job as our website looks rather nice now – if I may say.

Nearing the end of this project, I remember Hannah approaching me with an ‘Ok, Simon. We need to come up with a game plan so that Lucy can stay a little longer.’ But Lucy was way ahead of us: she somehow squeezed her way in to our marketing meetings, presenting well-thought-out plans for how to generally make our website look and feel better, which, despite her completing her initial picture-editing duties meant that four weeks turned into a few months. A few months turned into a year – and a year into a permanent contract. Not dissimilar to my own story, which started as a couple of weeks looking after Will’s dog, Wusha.

Lucy continues to do most of the leg work behind uploading content to the website – various pages, blogs, pictures. Anything with ‘digital content’ written on it, the chances are Lucy is at the forefront of coordinating behind the scenes. If I was an author, Lucy would be the publisher. If I played in a rock band, Lucy would be on sound, lights, the tour manager and figuring out how it could be better next time around.

So, anyway. Introducing you, directly to my left, to Lucy Spencer-Davidson. For our talk, we chose a table at our local park’s café – outside, under a shelter and, ordering fancy-sounding coffee as is customary when in Brighton, watched the late spring rain rolling in and watering the flower beds.

‘Well, what’s to tell really? I grew up in Zurich in Switzerland, just on the outskirts in a beautiful part of town, not far from the lake – far enough from the centre so it was nice and quiet, but close enough so you could just nip into town. I was born there, went to school there, all the way up until I came to uni in Brighton to study Media and Communications and then got this job here.

‘Something I’ve only just realised that’s quite funny in hindsight, was that my siblings and I used to make home videos. It’s funny because we’re all in some kind of creative role now – my sister’s in casting, my brother’s an artist, and now I’m obviously helping you with the content production side of things. My brother would usually direct and produce and they’d just mainly be satirical reviews or parodies or just plays we had written.

‘I remember this one where we went on holiday to this place in the south of France. The surroundings were beautiful, but the house we stayed in was horrible – the owner had made up loads of stuff about it that wasn’t true. So, we made a satirical documentary about it, with my brother pretending to be the owner, my sister interviewing and me on camera. That cheered my mum up.’

As well as taking on the role of digital content support, Lucy has become a champion of organising team activities outside work, including football tournaments.

‘I’ve played for my local team in Switzerland every year since 2000 until last year. We were the very first girls team that that club had had and after that I just worked my way up. Then I came to uni and joined the football team here – Montpelier Villa WFC. I don’t know what it’s like for other people who don’t do things with societies and sports and things, but for me it was the main part of my university experience. I had friends on my degree and good housemates, but sometimes you want to be friends with people you don’t live with and who don’t constantly talk about uni work. Also, since finishing uni, because students are quite transient, a lot of them have left, but my football friends have stayed around.’

In January, Lucy organised for the JbD team to play football against our SEO company Thoughtshift and beat them 7-3. They had undoubtedly gone easy on us because the next tournament Lucy organised for us to be in, which was Football vs Homophobia, we were ruthlessly thrashed in every single game.

‘So I came straight out of university and got offered this job at Journeys by Design just before I graduated. And the rest is history.’

In the last year since being here, she has, with much gusto, taken over communication with our web developers, become the main liaison with our SEO company, published Madagascar on our website, coordinated the private guides area of the site, reorganised our picture library with our 100,000 + images and hired a new web developer in order to help her take on the likes of the aforementioned projects and designed and is rebuilding the Wild Expeditions Ethiopia website.

And I’m sure she has a few other plans up her sleeve. Lucy has much to offer, discover, learn and explore. One thing’s for sure: we’ll need to get her out to Africa soon. Finally, I want to thank Lucy, firstly for sharing her story with me and secondly for her unwavering support over the last year. She is brilliant addition to our team and I know I speak for everyone when I say welcome to Africa House!*

*Africa House is the name of our building which incorporates Journeys by Design on the top floor, Wild Philanthropy on the first floor, a community coffee shop on the ground floor and our chill zone with a big screen, hammocks and yoga classes in the basement. If you’d like to plan a visit, you would be most welcome. We’re very proud of it. Do get in touch. 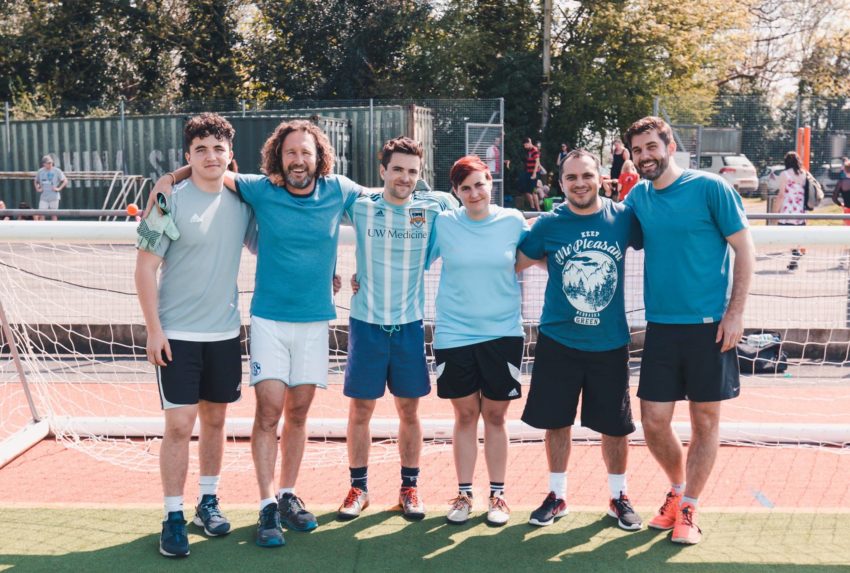 The Journeys by Design & Wild Philanthropy team at Football vs. Homophobia 2018, hosted by the University of Sussex Women’s Football Club