The writer Isabella Tree’s article for last weekend’s Financial Times is entitled Highway to Heaven. At the risk of spoiling your read, it ends: ‘But this encounter with Sebo seems a pivotal moment. That stirring of human cognition. It feels as though we’ve driven through the red dust of dawns and dusks to the solar plexus of equatorial Africa, to the source of things, the bubbling up of its greatest river and now the fount of our own chromosomes – a close encounter with our own primogenial past.’

Sebo is a chimpanzee. Tree and her family encountered him on a 1,600 mile journey that took them from the assumed source of the Ugandan Nile all the way to Murchison Falls. Ostensibly a road trip, they would enjoy white water rafting the Nile’s upper reaches, emulating the Bujagalis of old, the chiefs who proved their connection to the river’s spirit, Bugali, by rafting it on not much more than barkcloth. They would travel through a ‘kaleidoscope of entertainment’, the roadside shops, cafes and hotels source of much ingenious advertising. And they would experience wildlife and wildernesses like no other, staying in some of the country’s finest lodges.

However, as Tree says, all of it, the litany of animals, the sumptuous stays, and even the opportunity to trek into the Impenetrable Forest of Bwindi, serves as mere highway to what, for her, I think, was the deep meaning of the trip. Sebo is 35 years old, lives in Kibale forest, and is described by Tree as possessing a personality that befits his years: ‘Sebo lies back, legs crossed, arms folded, like the venerable patron of a gentleman’s club.’ He emanates, she says, ‘composure and self-respect.’ More than this, though, she is beautifully struck by the similarities she sees between herself, her family and Sebo. ‘His fingers and fingernails, the creases around his eyes, his ears, are ours.’ For her, this is no mere encounter. It is a ‘personal reunion.’

On which note, I have, as is my wont, said way too much. Do have a read of the piece for yourself. It’s a lovely introduction to Uganda, lively and informed, and beautifully written. I’m delighted we played a part in facilitating a journey that embodies so well the spirit of what it means to travel with meaning.

If you would like to know more about Isabella Tree’s trip to Uganda, or are interested in visiting for yourself, then do please get in touch. 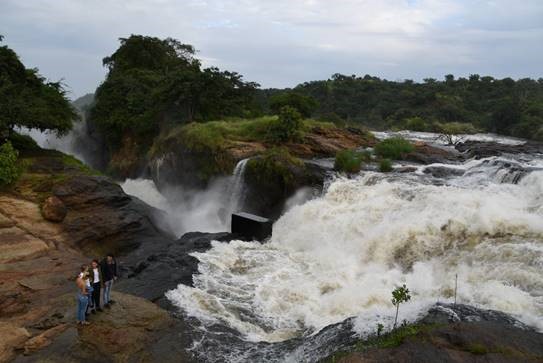 Images by Ned and Charlie Burrell