Just a quick note to alert you to the Financial Times’s Mike Carter’s most recent piece Water world, which sees him traverse the 160-mile length of the Okavango Delta in the company of guide Simon Byron. Lasting a week, full of incident, it serves as the most interactive of introductions to what Carter calls ‘one of the planet’s great quirks of nature’, the Okavango being a tectonic trough set in a desert that captures Angola’s winter rains, and which is worked by key animal species in such a way as to avoid becoming just an inaccessible swamp. Journeys by Design organised Carter’s trip.

As means of understanding the scale of that great quirk, the birds-eye view as provided by helicopter is as necessary as then travelling back by boat and by foot. So, from the ‘dusty suburbs of Maun’, a scrubland of ‘thirsting earth and bony cattle’, and ‘7,000 square miles of papyrus swamps and lagoons carpeted with waterlilies, and palm tree islands’, Carter is cast into the midst of it all, Byron guiding him through a world populated by ‘482 species of bird, 130 species of mammal and 64 reptiles’ –  and one utterly bereft of humans. At one point, Carter is so bowled over by the number of animals, he describes it as looking ‘almost cliched, straight out of Disney.’

Truth is, as Byron explains, this is how it once was. ‘We’ve gone,’ he says, ‘from having pockets of people in a world full of animals to pockets of animals in a world full of people.’ The Okavango is the Africa of ‘100,000 years ago’. A complex relationship between climate, geography and life, the Okavango has long been shaped, says Carter, by the plants and animals that have made it their home. The papyrus beds are natural filters, resulting in drinkable water. The elephants have long forged ‘ancient routes’ along which deposited seeds have resulted in coconut palm ‘highways’. The comings and goings of hippopotami create arteries, allowing for the flow of water. The delta’s islands began life as termite mounds. ‘In the Okavango, it was the animals that were the architects, landscapers and labourers.’

A week later, Carter makes it out of the Okavango, all the better for a trip that takes him so far out of the familiar as to ‘feel like we were the only humans alive.’ Key the experience is the fact that he was in the excellent hands of Byron. As well as providing Carter with the means for understanding the workings of the Okavango, Byron and guides like him are the reason why  it is possible to take such a trip. It is Byron that knows that lion whose tracks were found in camp would be watching as the party made its way the next morning. Its Byron who knows exactly how to escape marauding hippo, or what to do when encountering elephant in camp. And its Byron who knows where it is safe to swim. You realised,’ Carter says, ‘that, out there, without the knowledge of guides such as Simon, our life expectancy would be pretty low.’

As is my way, I’ve gone on for way to long. Much better that you read what Carter has to say for yourself. In the meantime, if you’d like to know anything more, do get in touch – both Hannah Rayner and I accompanied Carter on his trip. 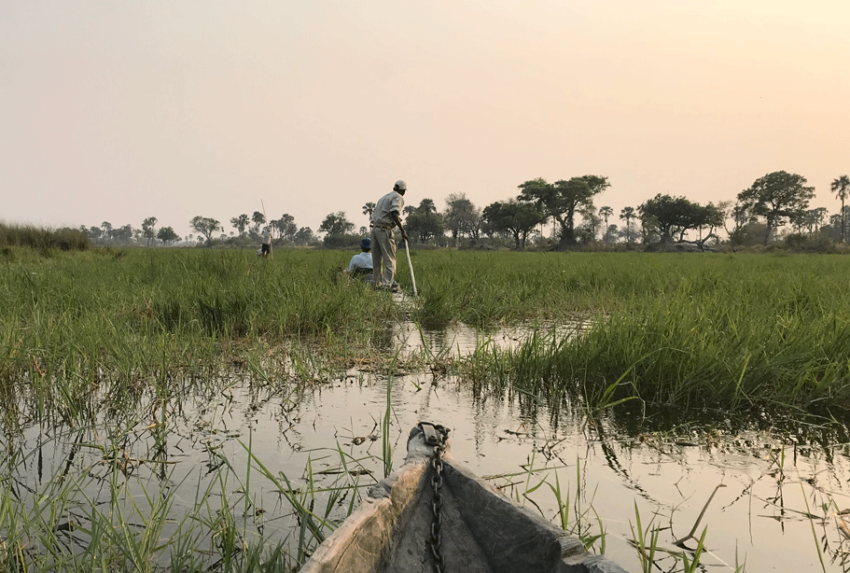