You may remember my blog about Lara Lowis, safari host extraordinaire at Lowis and Leakey Mobile Tented Camp. I thought it only fair to share some of the musings of her husband, Ninian, during that trip.

After studying Environmental Biology at university in England, Ninian’s passion, combined with a childhood of exploring the wildernesses of Kenya where he grew up, led him to an interest in human evolution and paleoanthropology, having spent time working with Dr. Meave Leakey.

You may not be surprised then to note that a game drive through the Mara with him is unlike any other. He is a deep thinker. Bypass the standard safari chit-chat that points out this lion or that wildebeest and you’ll get closer to Ninian’s territory. Treat every drive as an in-depth, private lecture on the evolutionary history of each animal you pass. One guide may feel inclined to point out an animal, while Ninian will tell you about each of its obscure traits and how they evolved them.

It was in this way that we found out why topis stand on mounds, sometimes to the detriment of their safety, why oribis have scent glands below their ears, and even why female spotted hyenas have pseudo-penises.

‘Did you know’, Ninian pipes up as we swing off-road to watch a large group of hyaenas at a wildebeest kill, ‘that hyaenas are much more successful hunters than lions. When you see a bunch of lions around a kill and hyaenas lingering around as if they’re trying to steal it from the lions, more often than not, it’s actually the other way around; the hyaenas have done the footwork and the lions have swooped in and stolen it from them.’

I was particularly intrigued by the discussion of the evolution of sleep. You can read up on it in a book called Evolution of Sleep (McNamara et al, 2009), but the main gist of it was this:

All kinds of animals have evolved different patterns of sleep. Take giraffes for example, which sleep for half an hour a day; or lions, which have about 14 hours; or dolphins, whose brains sleep one side at a time while the other side is wide awake. We humans tend to need about eight hours, give or take an hour or two. The reason for all of these? A better chance of survival.

As is the case with any species that has evolved, natural selection is dependent on survival of the fittest (fitness is defined by reproductive success). A trait that helps an animal survive will make it more likely for said species to reproduce and so pass the genes on that manifest these traits. So the question remains: why have different animals evolved such varying sleep patterns?

‘In the wild, it’s all about being energetically efficient and avoiding being killed’, Ninian tells us while slowing down to watch a group of lions shading under a large acacia. ‘Lions have quick meals, which their stomachs digest, but can be few and far between because of the migration coming and going, so they sleep for most of the day to preserve energy. Giraffes are browsers, which need to chew their food over for hours for their body to digest. They’re also vulnerable to predation all day and all night because they can’t burrow or climb trees, so they tend to have about half an hour.’

We humans are thought to have evolved out of Africa. The exact location of the cradle of mankind has been debated, but it’s largely accepted that it was somewhere in East Africa before spreading out to the other continents.

‘So, imagine this for a minute: Homo erectus, our early ancestor, running around the Maasai Mara two million years ago, gathering and scavenging for food while simultaneously avoiding predators. Primates gained huge advantages when they evolved the ability to see colour. We humans still hold that advantage over most large mammals out here, but it meant that we lost our ability to see well at night as the colour sensitive cells at the back of our eyeballs don’t work well in low light intensities. With the invention of fire, social organisation, and making homes in defend-able places like caves, we began being able to have a full night resting in the same place. So, our brains took advantage of the down time to sleep and rest and reset.’

There’s more to it than this. I can’t pretend to do Ninian’s safari drive lectures justice, but you get the general gist. And let’s not forget for a minute the adventure involved in a morning spent with Ninian and his ability to track down even the most elusive of animals. Leopards for example: one morning, in the space of 20 minutes, we found three. This was after watching the great Mara River crossing, being charged by a determined buffalo and wading across a fast-flowing river to a small rock island to eat breakfast. Lowis and Leakey tented camp comes highly recommended for all kinds of adventures. 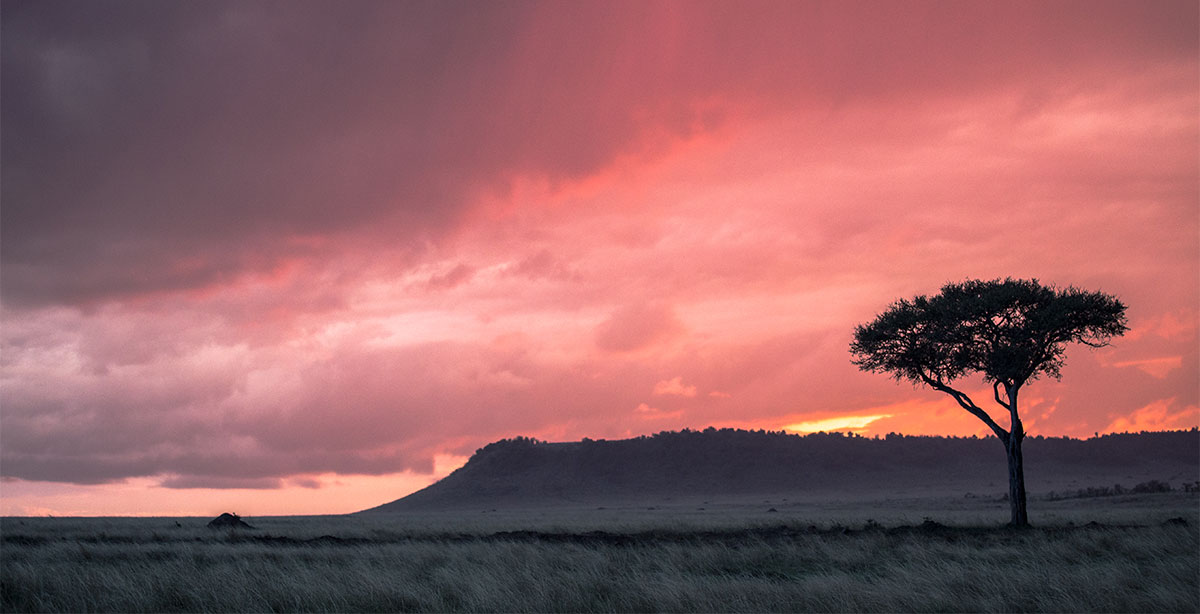