Welcome to Simon’s next diary instalment of his recent trip to Tanzania.

After leaving Gibb’s Farm, we continued through stunning scenery until we made it to the crater. Famous for its captivating views and vast plains and home to huge herds of wild game, I’ve never actually heard anyone talk about the sizeable forest leading up to the rim from the south eastern side. I wondered how many people have explored these parts: even among popular travel spots like this, there are still so many pockets of wilderness untouched by mainstream tourism.

We reached Entamanu, Nomad’s new camp. The drive up there felt like journeying to the ends of the earth. Kudos to Nomad for completing such a complex project – the road leading up to the camp is feat in itself. Set on the west side of the crater, Entamanu is the only place you can see the sun rise over the crater and set over the Serengeti. Not a single bush was displaced in the construction of the camp and it is evident that this completely removable camp adheres to the ‘leave only footprints, take only pictures’ way of thinking.

What impressed me even more was Nomad’s exceptional relationship with the local community. Built on the site of the wishing tree, women from Maasai villages come from surrounding countryside to tie bangles on for good fertility. Nomad’s site choice for Entamanu was fully approved by the Maasai community beforehand. Community and conservation first, business second, seems to be the driving ethos behind Nomad’s lodge portfolio.

After the delicious dinner and round of toasts (to just about everyone around the table for one reason or another), and observing that my waist line had noticeably grown since the start of our journey, I decided to go for a walk and push JbD’s new camera to the next level, taking a couple of long exposures over Entamanu (see below). This was until sleepiness got the better of me and I took up a particularly cosy spot by the fire, wrapped in sheepskins, and listened to the sound of wind whistle by until bed. 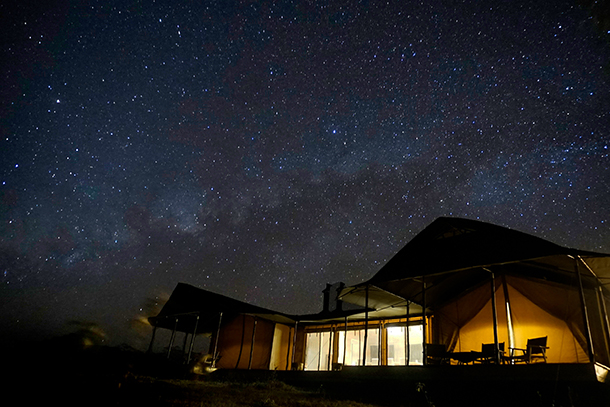