Among this year’s winners of the Nobel Peace Prize (announced last week) are two anti-rape activists. The first is the Iraqi Nadia Marudi, who was raped by ISIS combatants and later became the face of the campaign to free the Yazidi people. The other is Denis Mukwege, a DR Congolese gynaecologist who set up a number of clinics for victims of rape.

Mukwege’s story is inspiring and heart-rending. ‘When war first broke out’, he tells us, ‘35 of my patients were killed in their beds.’ Mukwege fled to Bukavu, 60 miles away, where he set up a maternity ward with an operating theatre, all in tents. Then in 1998 everything was destroyed again. So, in 1999, he painstakingly began to build it all from scratch. ‘It was that year that our first rape victim was brought into the hospital.’ After this, many women came to the clinic, all with similar stories entailing rape and torture due to warfare.

Since gaining independence in 1960, DRC was ruled by military dictator Mobutu Sese Seko until 1997. During this time, he used his position for his own personal gain. As he began to lose his grip, the country became increasingly unstable, a situation conflated by the 1994 genocide of Rwanda, when Hutu militants were overthrown and forced into the DRC, where they joined forces with Mobutu. Eventually Rwanda’s government intervened and overthrew Mobutu, placing Laurent Kabila in power. The Hutu militia still a problem, Rwanda once again moved to replace Kabila, who then called on Namibia, Zimbabwe and Angola for help. All five countries fought a proxy war in DRC, a war that saw all accused of vying for the country’s natural minerals, to the detriment of the Congolese.

Despite the official end of the war in 2003, two years after Kabila was assassinated, there are still a number of militia groups in operation. His son Joseph Kabila replaced him in 2001 and remains in power, this despite his having to constitutionally step down in 2016. While he announced in August 2018 that he would not seek another term, the vacuum created by the uncertainty, corruption and lack of accountability of national and regional government have emboldened militia, resulting in a breakdown in law and order. Mukwege tells us that the rape of women is being used as a strategy of war. Now funded by microfinance initiatives and UNICEF, the 350 beds of Mukwege’s hospital are almost all filled with victims of rape.

The three stages of care in the hospital entails psychological examination to see if the women and children can mentally withstand surgery. The second is an operation and / or medical care. The third stage is socioeconomic care. ‘Most of these patients,’ we’re told, ‘arrive with nothing, not even clothes.’ Afterwards, legal support is provided. Some of the victims know the perpetrators and the hospital has lawyers who help try to bring their cases to court.

Mukwege tells of a time when he had just come back into the country and five men with guns climbed into his car as he got back home. They shot and killed his security guard, who tried to help. Miraculously, Mukwege escaped with his life. The assailants drove off in his car and Mukwege found his two daughters and niece at home physically unharmed, but having been threatened by these men. Though Mukwege does not know why they attacked him, it was just after a time when he had spoken out against Kabila’s government.

After this, Mukwege and his family fled to Sweden, and then Belgium, but in 2013 was persuaded back after women campaigning in the area grouped together to buy his plane ticket home. Inspired by their efforts, some of whom have faced these atrocities, and had been campaigning against attacks on Mukwege, he returned to DRC. A group of 20 women, without weapons, took it upon themselves to work in shifts to protect him day and night from further attack until UN peacekeepers stepped in to give round the clock protection.

As with Nadia Marudi, Denis Mukwege’s work, his bravery, and his unwavering critique of a government that he calls illegitimate, has given voice to women and children against whom rape, as he says, has been used as a strategy of war. Modest and committed, he welcomes the award, and is honoured, but emphasises that it’s most useful in that it serves to bring the world’s attention to the plight of those affected by the ongoing atrocities. 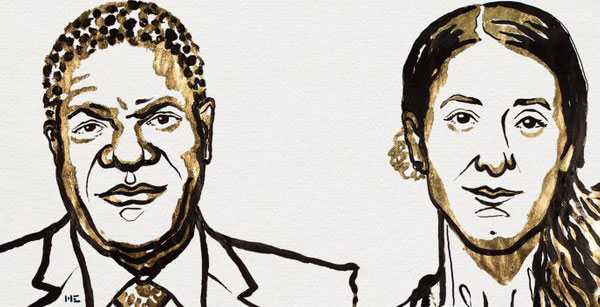