I just wanted to follow up on the news shared last week of Angela Sacha’s passing with my gratitude for everyone’s beautiful messages of love and support and to share a little gem, courtesy of Dereck Joubert and his team at Great Plains.

As your messages rolled in, I have to confess to being put through the feelings mill. They made me cry and they made me laugh. They made me sad. And they made me so pleased for her. I recognised everything you said about her – her energy, her kindness, her intelligence, her care for her work. However, what I could never have known was just how far and wide her name had travelled, and how so very deeply the sound of it affected people. She was so loved, and I just wish she was here to know and feel how much. I would, with your permission, like to preserve all your messages for prosperity, something to remember Angela by. I’ll be in touch with all about this. In the meantime, thank you, from the bottom of my heart.

Before going, though, the aforementioned gem. When Dereck Joubert heard of Angela’s death, he was, like all of us, shocked. ‘She was so full of life,’ he wrote, ‘that it is impossible to imagine her not being alive.’ And then, in the next breath, this wonderful piece of generosity: ‘The next baby rhino to be born from our relocated rhinos in Rhinos without Borders, into Botswana, will be named Angela (if it’s a girl!).We have a Name a Baby program that guests donate $25K to each rhino, and name but this one would be on us!!’ And so it has come to pass, though much quicker than we had initially thought, with a previously unnamed calf being named after Angela.

This is as apt as it is wonderful, because as Dereck writes in his most recent newsletter, Angela worked closely with Great Plains and so with the Rhinos without Borders scheme. Similarly, I know what great friends Angela was with the Jouberts and the rest of the team, and what a blow her death has been to them. Naming the daughter of a translocated rhino (the equally superbly named Ma Palmer) after her is the most fitting of gifts to Angela’s memory, for multiple reasons. She worked extraordinarily hard in the name of these rhinos, and took enormous pleasure in the fact that they are successfully calving in their new homes.

So, here’s to wishing, as Dereck says, ‘young Angela a safe and protected journey through life.’ And here’s to our Angela, who would, were she here, be doing all she could to make that wish come true. 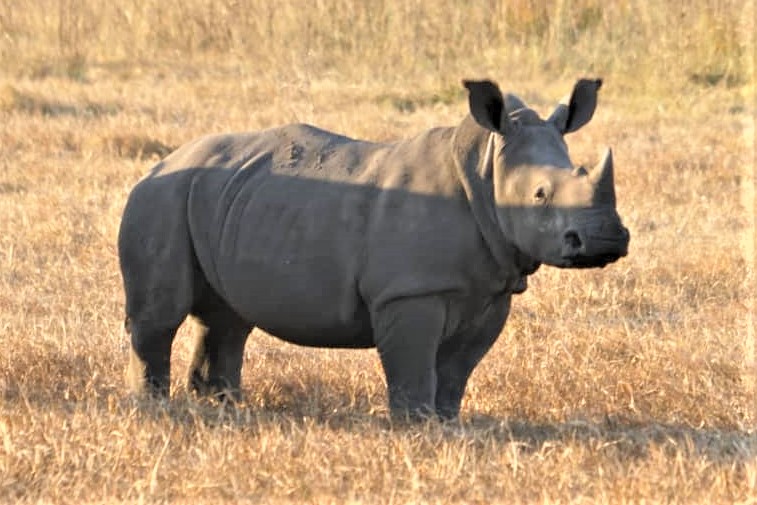 Angela Sacha died on 9th September 2021. At the request of many of her clients, colleagues, and friends, we have set up The Angela Conservation Fund. Funds raised will be used to support the causes Angela held dear to her heart. Rhinos without Borders is a joint initiative between andBeyond and Great Plains Conservation. Please note that while the initiative is alive and well, the relocation programme is currently paused as all resources are repurposed to help protect the 87 relocated (from SA to Botswana) rhinos and their 60+ post-move offspring.