Inspired by Journeys by Designs brochure Experience, which for October highlights the chance to visit either the Hadza of Tanzania or the Ju/’hoan of Namibia, I thought we might more deeply explore the healing dance, an important Ju/’hoan ritual, one still practised today, which involves the dancing ‘curer’ going into a trance, and which I recently had the opportunity to attend.

The Ju/’hoan of Namibia, otherwise and not correctly known as the !Kung, is one of the nations that collectively make up the Sans people of Southern Africa, and whose social structures are underscored by equality, kin, service, by various systems designed to put the many before the few, including sharing food and land, by the giving of bonding gifts, and by the healing dance. There are four main types of dance: Elephant, Gemsbok, Drum and Giraffe, the last of which is practised by the Ju/’hoan, and which has endured and adapted to the lifestyle changes necessitated by the late 20th century.

The dance itself is of central importance to the well-being of the participatory group or groups, with health understood not in terms of just the physical, or the spiritual, or the emotional, but rather as life itself, as a whole, traditional practitioners making no distinction between different categories of health. Here, on this world, the sick are largely the victims of the spirits of the dead, which visit with the express purpose of making the well ill, of causing accidents, of bringing misfortune, and, finally, if allowed, death, their end game being to carry us off into the sky, a misguided attempt to recreate in heaven the family-based unity of life on earth. Seen this way, the dance is a battle with the spirits of the dead.

In practice, what this means is a usually night long dance, normally about a fire, open to all, and which begins in fairly relaxed fashion, the dancers (curers) surrounded by clappers and singers. As time passes, it builds up in intensity, the dancers entering their trances, acting dead, and then returning to heal the sick. From the outside, for the uninitiated, the dance takes many apparently increasingly animated forms. From the inside, the dancer is accessing spiritual energy or ‘n/um’, from the stomach, a process described by practitioners as both painful and hot – which explains the use of scented powders, and which are applied to dancers as a balm.  In the hands of the experienced healer, the ‘n/um’ is then guided up the spine and into the brain, where it aids in the transformation of the dancer, who moves from normal everyday life or ‘second creation’ to that of ‘!kia’, an ecstatic or ‘first creation’ state of being.

Described by participators as a form of rebirth, one achieved through simulating death, it is understood as a dangerous and difficult journey, which is why, while anyone can become a healer, just a few actually do, the pain and the risk of no return enough to put off all but the most serious of apprentices. Once !kia is achieved, the healer is empowered, and wages battle with the spirits of the dead, pointing at the sick and at everyone, both expelling spirits and protecting the community from future visitations.

As a practice, the dance is both a ritual and a collection of flexible practices, the former a vessel for belief, the latter a means with which to accommodate change and incident, be that the need to adapt to new lifestyles or to the individual need of a particular member of the group. Traditionally, healing was free, and benefited all. Today, with the ongoing shift in Ju/’hoan society from pure hunter-gathering to a more permanently settled and a mixed economy existence,  healers can and do charge, which changes the relationship with the group, the benefit of the healing going to whomsoever is paying. Again, while there are concerns as to where this might lead with regards to the dance’s role as a type of societal  glue, these changes are also, say some, examples of the way the ritual continues to adapt to changing circumstance.

All said, I hope the above gives some insight to a practice that is neither peripheral nor mere entertainment to the  Ju/’hoan. It’s central to their way of living, extremely important, and my own visit opened my eyes up to a new and extraordinary world. Please do go, if you get the chance. It’s an absolute revelation.

Further reading: Embers of Society: Firelight talk among the Ju/’hoan Bushmen and Dobe Ju/’hoansie healing practices: Medicine and Health for the Dobe Ju/’hoans 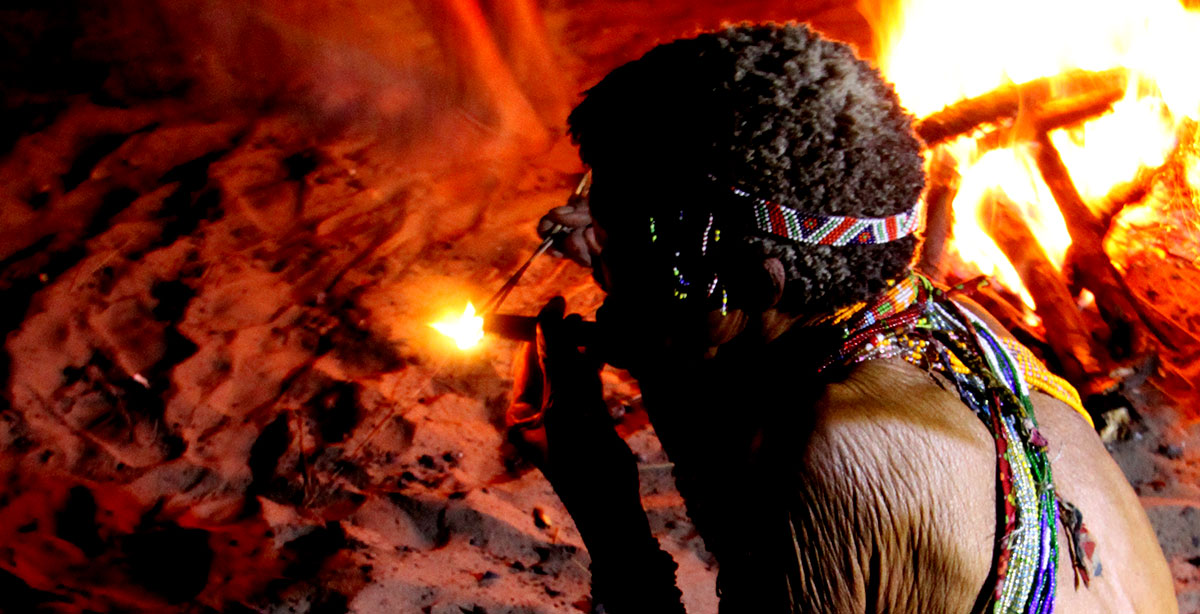