I was lucky enough to catch up with Zuzana, who assists Grant on the finance desk, and has recently come back from a trip to Ethiopia, involving the Omo Valley, Alledeghi, Lalibela and finally Gheralta. We’re doubling up here: as well as finding out about Zuzana’s trip this blog is designed to point the reader in the direction of our brochure Experience, which suggests certain Africa-based experiences for each month. This month, December, coincides nicely with a time we recommend visiting the Omo.

For Zuzana it was a trip of many firsts. We sat down with a cup of tea and she took me from the top. Often called the cradle of humanity, the Omo Valley is the site where Richard Leakey found the earliest Homo sapiens fossil. It has one of the widest genetic variance of anywhere in the world and is widely accepted by African Origin Theory that modern man may have started here. Zuzana’s description certainly sounded like Eden:

‘I learnt things here, not just interesting things, but genuinely important things that I think western culture has forgotten about. Interaction, for example. You could see a deep respect between the people. It’s not every person for themselves; its every person for their village. And people talk to you.’

This seems obvious, but in the West greeting strangers without an ulterior motive has become a societal taboo. People stay away from each other and mind their own business. Each person’s problems are their own. Omo culture seems to completely turn this on its head.

‘We were staying with the Kara people to start with. The first night there I couldn’t sleep. In a strange sort of way, it was too relaxing to close my eyes; I just listened to the river gently flowing by, the low hum of the village and soothing birdsong in the canopy above me. Lale, our guide, is from the Kara tribe. I know Lale through emails, so it was good to put name to face.’

Lale Biwa is part owner of Wild Philanthropy’s Wild Expeditions Ethiopia, and manages the outfit’s southern operations. He is a born and bred Kara man, but has a real respect for the other tribes, which appears to be reciprocated, giving Wild Expeditions a unique insight into some of the other tribes of the Omo, one of these of which is the Mursi, which Zuzana visited the day after.

A three hour boat ride up the river, the Mursi are famous for their lip plates, where their bottom lips are pierced and stretched over a large disc, increasing in size with age and status. There is much about the Mursi people that remains a mystery and each time Wild Expeditions journey into their lands, something else is learnt, making each trip feel more like an exploration.

‘I think some of them had never seen a white person before. I wanted to be respectful, but was difficult to know how to greet them… Nod? Smile? Handshake? I sat with some girls that were probably about 14 years old. They wanted to explore my body, to see if I was the same. I showed them a tattoo on my foot and my nail varnish that they really liked. It was nice to find some common ground. I spent about three hours with them – the language barrier became incidental.’

It’s often said that only 7% of communication are words. The rest is tied up in inflection, gesticulation and facial expression. Whether or not this is an urban myth, the fact remains that Zuzana saw deep into the culture of the Mursi that day, something that explanation in a mere blog couldn’t possibly begin to properly reflect.

‘That night we saw a Mursi dance from afar that looked like some kind of celebration. We still have no idea what it was about and was by no means for our benefit. Compared to the Kara and Hamer, the Mursi are quite a stern-faced tribe with little interaction between men and women during the day, so this dance seemed like a rare expression of feeling. It was beautiful to watch and I think about it every day.’

‘One of my main highlights of the trip was visiting the Hamer people, a short hour’s drive upstream. One of the women asked if she could dye my hair. Graeme [Wild Expeditions’s manager] had never seen them invite a tourist to do this. They leave milk overnight in a little cup and then skim the top off, which by now is like butter and mix with the ochre colour of the clay. It’s not just a beauty thing, they use it as a protection from the sun on the heads and faces of children too.’

I don’t suppose many finance managers get to go on trips like this, but it’s easy to feel disconnected from Africa when sitting in our office, overlooking what is today a freezing London Road. It makes it all the more important for each of us to visit Africa regularly, to remain connected, to come back with stories like Zuzana’s and above all to feel inspired. She told me afterwards that although it’s been two months since her trip, she has thoughts about the Omo every day. 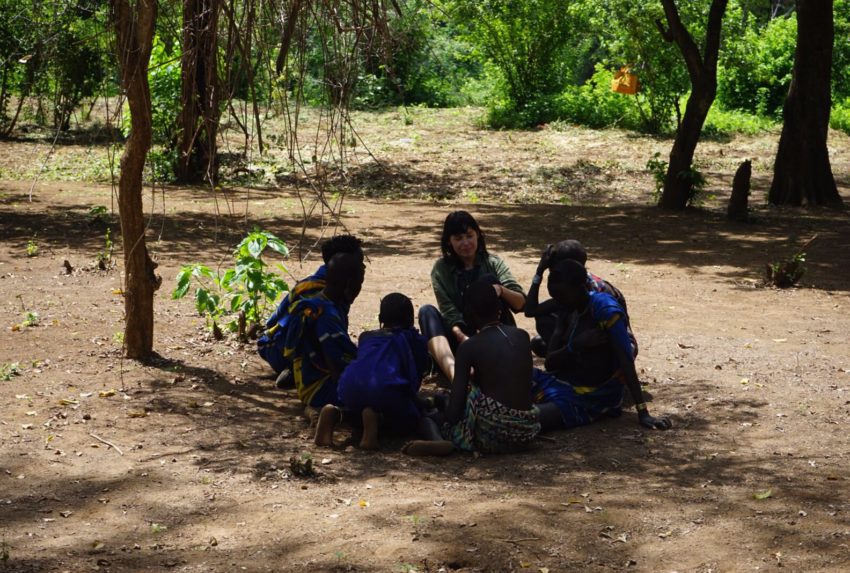