Chris Tinkler shares the second half of his most recent trip to Ethiopia exploring the rock churches of Lalibela. If you are yet to come across it, the first part can be found here.

Arriving in Lalibela, we slowly drove our way up to the town. It sits in a commanding position in really spectacular hillside country. The flight over already revealed some of the sunken rock churches, and it’s always fascinating to me how the scale of objects seen from above always deceives us. All would be revealed shortly afterwards, once we had immersed ourselves into this town’s deep history.

After checking into our hotel, I was personally very pleased to be heading out to a restaurant in Lalibela for some more local cuisine. I had become very fond of njera, the pancake made of teff, which forms the base for all of Ethiopia’s dishes. The health benefits of teff are well known, and I never grew tired of this wonderful food, and all the more now that I knew I was consuming something beneficial.

Lalibela’s monolithic rock churches are organised into clusters or groups. There are 11 rock churches in total, all with their own story and account of a time gone by but not lost through the churches ongoing service. The word Aba means priest in Ethiopia, and I think besides the impressive church structures, these men of faith are their bedrock, the very foundation that keeps these churches standing through the ages. To become a priest, the training starts early, at the age of seven. It will take about ten years to attain the status of deacon and it is then that they will be required to get married and have a family. On top of this, there is no fast tracking this dedicated process as you cannot become a fully-fledged priest until 30 years of age. 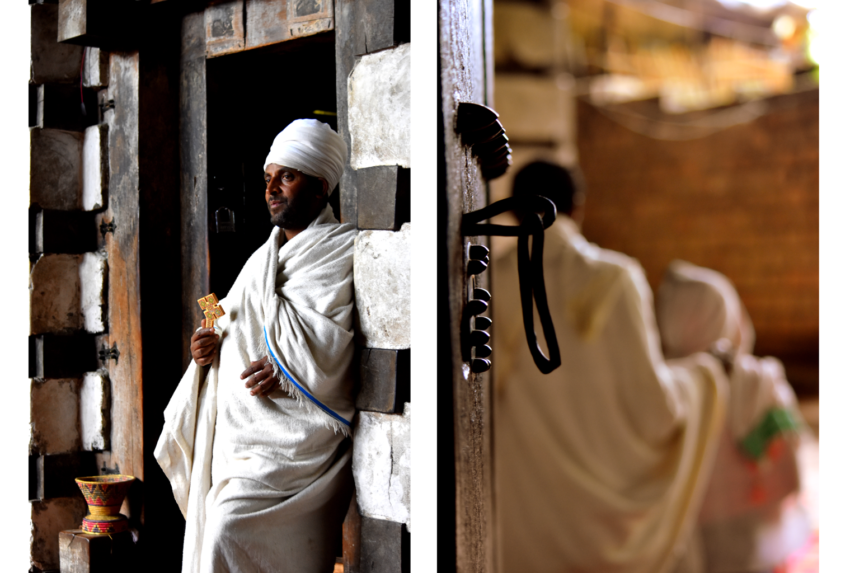 As we explored the various clusters of churches, so the information overload begins. As a side note, be careful which way you enter as some churches have separate entrances for men and woman. Our guide explained each church’s unique history, and we were introduced to a variety of artefacts that are kept inside. Gold crosses weigh up to seven kilograms, and some of the crosses that we saw – delicately brought out for display – were 900 years old. The Church of St George still houses the personal items and treasure of King Lalibela himself.

I was especially fascinated by the doors. These impressive, old wooden structures are as old as the building, and I found them to become a subject of my photography. Looking at one of the doors, I saw little by way of security measures other than an old lock and key or a chain and padlock. It did make me wonder in today’s world how these artefacts and crosses are simply left alone. Perhaps it’s the fear that the consequences would be severe and I am sure they would be, but a part of me wants to believe that it’s the intense faith and belief that to commit such an offence would unleash the heavens. Either way, these beautiful places are clearly a sanctuary not only for the devotee, but for antiquity.

As I stood in the Church of St George, one of the churches which we had seen from the air, it was, of course, a lot bigger than I had imagined. However, it’s a scale that can’t be measured merely by the monolithic size of the structure itself. This is not a relic, a medieval ruin, a museum. It’s a fully functioning church, and standing here, in such an old place, in a space made for devotion, I was struck by the scale and longevity of the faith that has sustained it over centuries. It’s much more than I could possibly have imagined. It’s really big – in every respect. It’s a revelation. 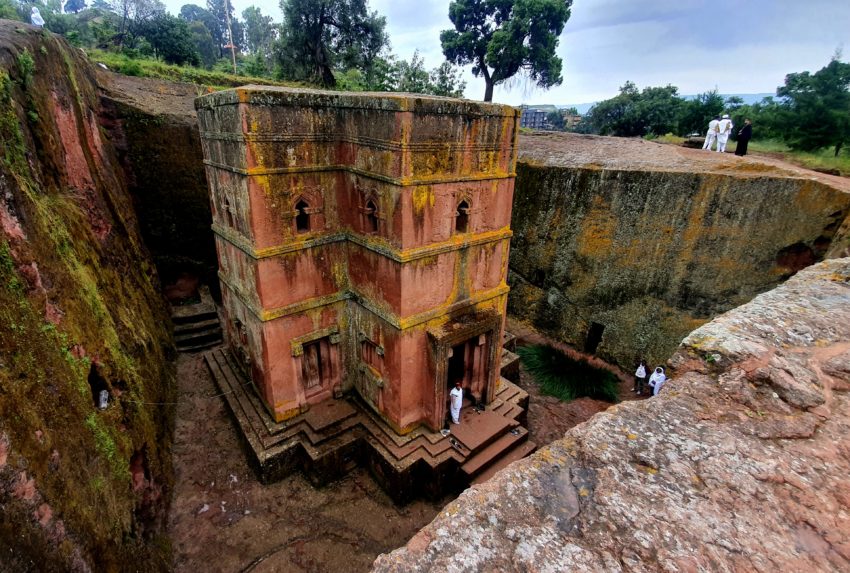 If you would like to know more about Chris’s trip or Lalibela, please don’t hesitate to get in touch.