Just over a week ago, Hannah Rayner and I had the pleasure of catching up over a coffee at our favourite local cafe. I quizzed her about her travels whilst working for Journeys by Design and we got talking about one particular experience that has fascinated me ever since I started working for JbD back in June 2017: Rovos Rail, ‘the most luxurious train in the world’.

As Digital Content Support, I maintain the website and make sure everything is up to date. One of my first tasks was to optimise and update the images for Rovos Rail. A family-owned train-hotel, the luxury mobile accommodation was founded by Rohan Vos (hence the name Rovos) in 1989 and currently consists of 210 staff members, both on board and behind the scenes, maintaining and restoring carriages.

As luck would have it, Hannah visited South Africa just under a year ago, in March 2017, accompanied by her other half, Chris, and the two of them travelled from Pretoria to Cape Town by Rovos Rail.

‘It was Chris’s first time in Africa and the journey gave him the chance to see what I do professionally, up close and on the road. Travelling by Rovos Rail was the main part of the trip, as nobody from Journeys by Design had experienced it yet. We started off in Pretoria, which is both a historical and political hub of South Africa (in fact one of the three capital cities). The whole adventure is very personal; as the passengers get ready to embark, Rohan Vos himself comes to greet each individual and gives a little speech in preparation of the journey. He shakes each guest’s hand, treats everyone as if they were a close family friend. He spoke about returning clients and mentioned that one passenger was in fact preparing to depart on their 15th Rovos journey.’

Rovos Rail offers a plethora of journeys, varying in duration and route. As a package, the trip Hannah and Chris took is a three-day and two-night journey with a few stop-offs along the way. When waiting for the train to depart in Pretoria, one is also given the opportunity to have a roam around the Capital Station Park Museum, speak to the engineers and workers who mend carriages and such. Hannah mentioned how striking it was to see how much love, passion and expertise the men and women who put the trains together have.

‘It really was a once-in-a-lifetime experience,’ Hannah explained, which took me by surprise, considering all the other countries and journeys she has experienced since working for Journeys by Design. ‘The best thing was seeing Chris’ reactions to everything. It did take him some time to start talking as he was so blown away by everything, but in all honesty, this experience inspired and fascinated me in a different way to all my other amazing travels in Africa. The gentle chugging of the train at night was incredible. The bed is right up against the window and as you look up at the stars; when going through the Great Karoo, there is no light pollution, it’s breathtaking. I barely slept because I loved the light rocking and chugging of the train so much and the spectacular sunrises which concluded the wonderful nights. On top of all of this, in true South African fashion, you get fed and watered with amazing food and drink all around the clock.’

In July 2019, Rovos Rail are launching a new route: The Trail of Two Oceans. The expeditions will be a 15-day journey covering the width of southern Africa, crossing a total of four countries from East to West: Tanzania, Zambia, Democratic Republic of Congo and Angola. The voyage begins in Dar-es-Salaam, Tanzania and ends in Lobito, Angola. Before I could even finish my question as to whether or not Hannah would consider travelling by Rovos Rail again, she gave me a very clear and decisive ‘YES! I can’t imagine a better way of getting from A to B. Due to the slow and almost romantic nature of the train you get to experience all the sounds, smells and impressions of the surrounding landscapes. It is the most amazing way to travel – perfect for people who have the time, want something different, truly unique and want to be utterly spoiled; it is truly memorable.’ 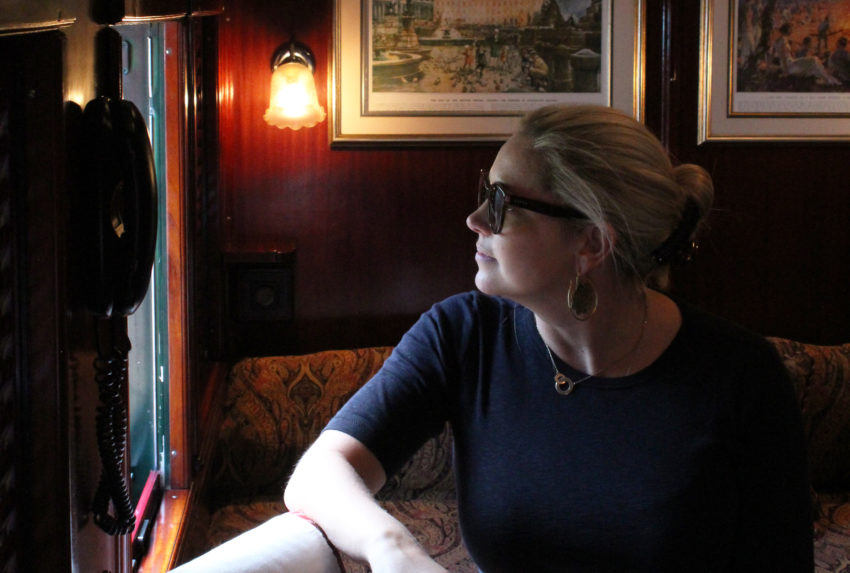 IF YOU WOULD LIKE TO FIND OUT MORE ABOUT HANNAH'S EXPERIENCE, GET IN TOUCH TODAY