Landlocked and bordered in the north by the Democratic Republic of the Congo and Tanzania, to the east by Malawi, in the south by Mozambique, Zimbabwe, Botswana and Namibia, and to the west by Angola, Zambia is located between southern and equatorial Africa, and as such is something of both.

Consisting largely of the same plateau that runs south-north up the spine of much of southern Africa, Zambia is marked by mean elevation of 1,200mm, and rarely achieves altitudes over 2000m. Drained by the Zambezi and its main tributaries, the Kafue and the Luangwe, and by the Chambeshi and Luapula, the plateau is characterised vast river valleys and by flat bottomed drainage valleys known as dambos. The dominant form of vegetation is miombo woodland and grasslands. 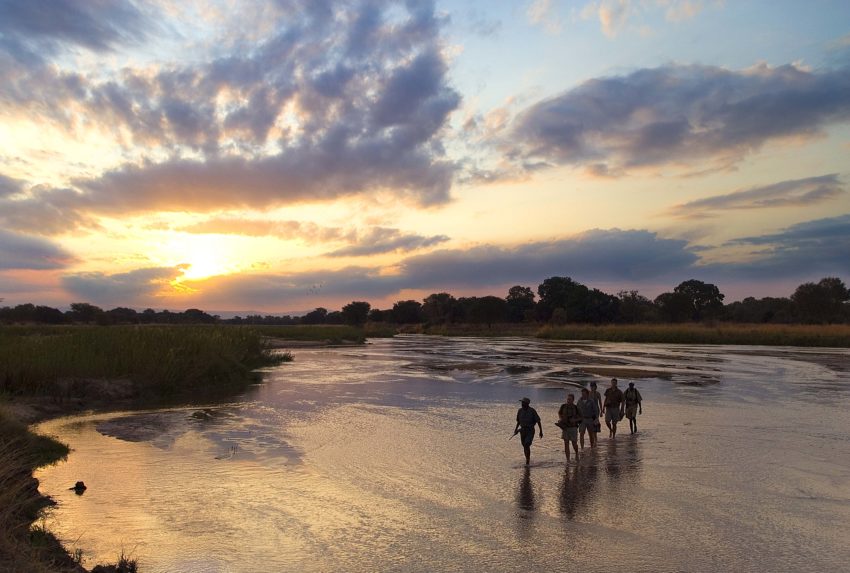 The climate in Zambia is decided by the oscillations of the Inter-Tropical Convergence Zone (ITCZ), the converging of – and interaction between – the zonal Congo air mass and the meridional south-eastern trade winds and monsoonal north-eastern winds. Providing the country with a bimodal seasonal pattern, the ITCZ moves over Zambia late in the year, bringing rain to the north as of October and reaching the south in the last week of November, where it is at its southern most limits. The ITCZ begins to journey back north in March, through northern Zambia in April / May, leaving the country relatively cool and dry until the end of August, when there is a sharp upturn in temperature and levels of humidity, which is why while – strictly speaking – the country experiences a dry season and a wet season, Zambia is regarded as having three seasons: wet, cool dry and hot dry.

Average levels of precipitation increase northwards, being 450mm to 700mm per annum in the south, 800mm to 1000mm in central regions, and 1000mm to 1500mm in the north. Experiencing, therefore, a dry-wet tropical climate, Zambia is largely a semi-arid to semi-humid to humid country. Given the difference in temperament of its dry season, and the fact of the moderating effects of altitude, temperatures fluctuate across the year. The cool dry season experiences a mean daytime range of between 15°C and 27°C (6°C – 10°C in the evenings), figures that jump to 27°C – 35°C in the hot dry and wet seasons, with the Zambezi and Luangwe valleys occasionally reaching into the early forties.

Journeys by Design’s destinations are situated in either the central western areas of Zambia (North and South Luangwe and Kasanka), the central south (Kafue, Lusaka and Lower Zambezi) or the south (Victoria Falls). As such, the best time for viewing wildlife is between May and November, when it is dry, when the cover is greatly reduced, when seasonal water sources are either drying or entirely dried up and when the game masses along riverfronts, lakesides and waterholes.

The two dry seasons are roughly further divided as follows: May is still reasonably green, the game still reasonably dispersed. June sees a drying up of the dambos and the land turns brown and yellow, a classic savannah landscape stretching well into the end of August. Cool, dry, it is a great time for walking, a Zambian speciality. September signals the start of the heat, an indication – perversely – of the rains. As the temperature cranks up, so the new woodland tree growth cycle begins, and signs of pre-spring are gradually apparent, not least in the scent and sight of flowering Brachystrigia (miombo), whose red petals are a startling contrast to the otherwise pale, sandy colours of much of the environment. Even so, it is still the dry season. The game is now heavily massed about the only remaining water supplies, and October and November are fantastic months for lion, hyena and other predators.

Once the rains arrive, many of the parks’ dirt roads become impassable and all but South Luangwe close for the off season. This said, a good many private camps remain open, offering a different kind of safari. Some specialise in wet safaris, others emphasise the advantages of visiting in the summer months, when the game is in better shape, when many species calve and when behaviour changes, allowing for specialist interest. Also, it is the time for watching birds.

Nevertheless, for those reasonably new to Africa, and for those interested primarily in big game, the dry season is undoubtedly the best time to visit Zambia.