Best time to visit April through to October during the drier months. The long rains run from November through to March, with the wettest months being January and February. The winter months then run from May through to the end of October offering dry weather. April and May are green and verdant, whilst September and October can feel dry. Temperatures are cooler during the winter months. 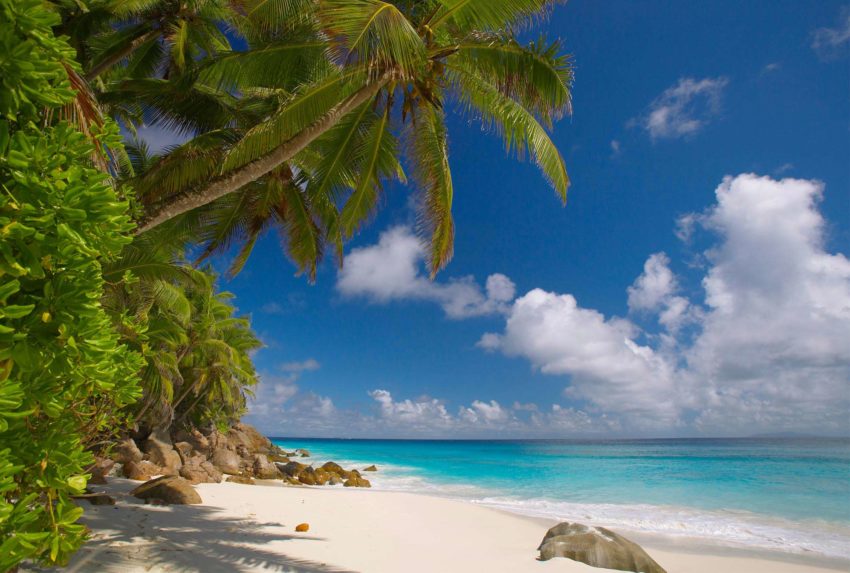 The Seychelles islands are a group of coral and granite islands located in the Indian Ocean, between latitudes 4° and 9°. Situated approximately 1800 kilometres due east of the Kenyan-Tanzanian coastline, and measuring some 1500 kilometres from Bird Island in the northeast to Aldabra in the southwest, the Seychelles consists of 115 islands, 30 of which are inhabited.

At the moment, Journeys by Design designs itineraries that include the public islands Mahe, Praslin and La Digue, and the private islands North, Denis and Desroches. All situated in the northern half of the country, the public islands and North are granite, while Denis and Desroches are coral islands. The granite islands are generally larger and taller, with Mahe the tallest at 905m. Praslin is 367m high. La Digue 333m. North is tiny, Denis very low lying and Desroches is 330m at its highest point.

The climate in the Seychelles is governed by a complex interaction between the monsoons, the Indian Ocean currents, a meridional south high pressure zone and the inter-tropical convergence zone. Simply put, the drier and slightly cooler southeast trade winds blow between May and October, bringing little rain and fair weather. In November the winds change directions, the humid northwest monsoon winds ushering in the summer – December through March. In common, therefore, with subtropical Africa, the Seychelles experiences a wet season and a dry season, with April and November the transitional months – or autumn and spring respectively.

While always bimodal, the shape of the pattern changes from north to south, with levels of rainfall decreasing southwards, the dry season beginning to dominate – so much so that in the southwest, on Aldabra, average levels of precipitation range between 867mm and 1100mm per annum, the dry season lasting into early September. In contrast, on Denis, in the northwest, the levels of precipitation more than double, ranging from 1589mm to 2358mm, and the dry season lasts for just one to two months. Journeys by Design’s destinations are all located at the wetter end of the spectrum, but the rain, when it comes, is hard, short and occurs in the afternoon, leaving the rest of the day bright and clear. Temperatures are relatively constant at 27°C (winter) to 30°C (summer).

At 23°C – 27°C, the Seychellois water temperature amplitude is bigger than that of its air temperature, but swimming is always exceptionally pleasant, winter or summer, while the best diving and snorkelling is to be had during the transition months, when the water is still and clear. Fishing is good all year round; the Giant tortoise mates and nests between February and September, the Hawkesbill turtle nests June to September, the Green turtle October to January; the whale shark migration takes place between August and November; and humpback whales breed (in the south) November-April.

Seychelles luxury holidays are available all year round, but the sea is calmer between April and October, the climate drier, slightly cooler.