São Tomé and Príncipe is an island country off the western equatorial coast of Central Africa, approximately 150 miles west and north-west of the Gabonese capital city of Libreville.

Named for the two largest islands in its pair of small archipelagos, after Seychelles it is Africa’s smallest and least populous sovereign state. São Tomé is the larger and most mountainous of the two islands, with peaks reaching well over 6000 feet; both feature lush forest and verdant cropland, and at sea-level fully tropical climates – the Equator is immediately south of São Tomé. Relatively untouristed, São Tomé and Príncipe is renowned among nature-lovers for having a greater density of endemic species per square mile – mostly birds, but also fish, reptiles and amphibians, and some mammals including a number of bats – than anywhere else on the planet. 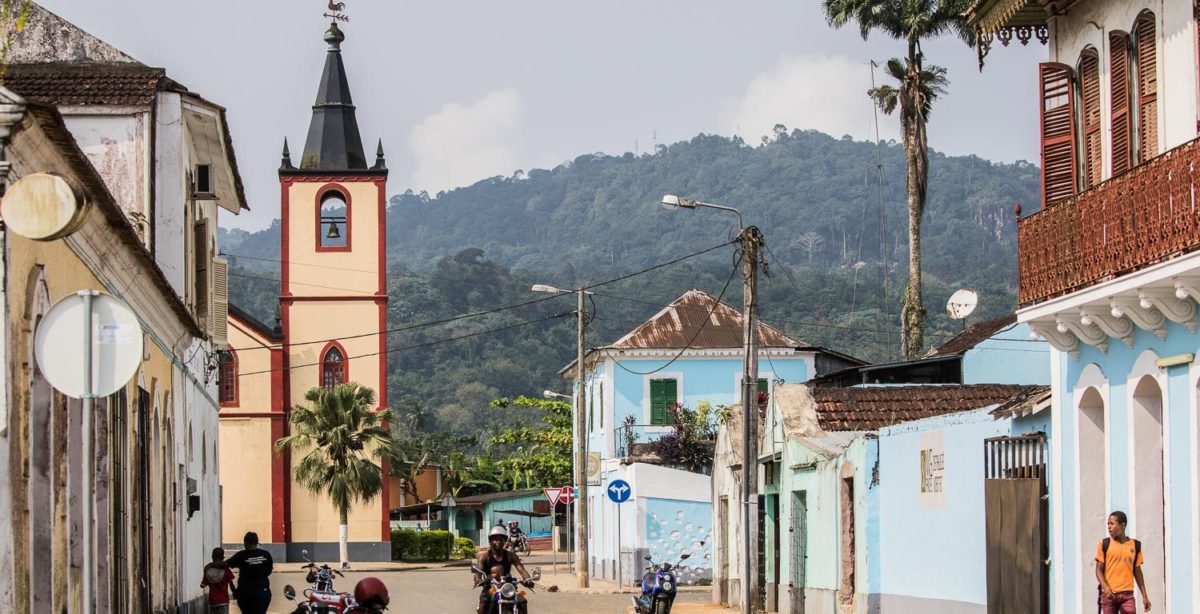 Uninhabited until the Portuguese arrived in the late fifteenth century and established trading-bases here, by the end of the century plantations had appeared on the islands, the volcanic soil having proved suitable for crops including sugar. Most of the earliest inhabitants were Jews, who at that time were being expelled from the Iberian Peninsula, but in time the population came to consist largely of slaves from elsewhere in Africa. Eventually, the difficulty of controlling the enslaved population, as well as competition from sugar-producing colonies elsewhere, led to a decline in São Tomé and Príncipe’s agricultural fortunes, and it became principally a stop-off point in the Atlantic slave trade.

By the early nineteenth century, however, coffee and cocoa were being grown on the island, and by the twentieth São Tomé was the world’s largest producer of the latter – it remains a staple of the country’s economy today. Calls for independence began in the 1950s and following Portugal’s decision to dissolve its overseas colonies, São Tomé and Príncipe achieved independence in July 1975. It is now a relatively stable semi-presidential democratic republic.

Visitors to São Tomé and Príncipe fly into São Tomé International Airport and access the rest of the country from there – by road, sea or air. Replete with perfect beaches, this is nevertheless a perfect destination for those after more than a beach holiday. Trips to remote coves and woodlands, by small boat or by foot, afford opportunities to observe an abundance of rare bird, animal and plant species, with Príncipe’s status as a UNESCO biosphere a testament to its remarkable biodiversity. The islands’ culture is a blend of African and European, and the cuisine, in particular, is often remarked upon, utilising as it does unusual fruits and vegetables not found elsewhere.

To find out more about São Tomé & Príncipe, please get in touch.