At the moment, Journeys by Design designs itineraries that include the Bazaruto and Quirimbas archipelagos, Gorongosa National Park and Niassa National Reserve.

Bordered by Tanzania in the north and by Malawi, Zambia, Zimbabwe, South Africa and Swaziland to the west and south, Mozambique is located on the eastern coast of southern Africa. 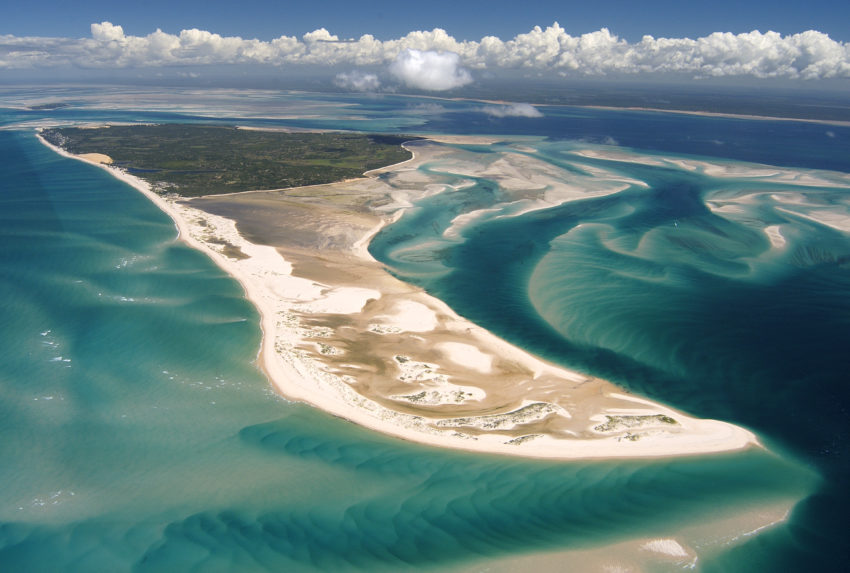 As with the rest of southern Africa, Mozambique has a tropical climate, the particularities of which are determined by latitude, by altitude, by its proximity to the ocean and by the characteristics of the Inter-Tropical Convergence Zone (ITCZ) and – to a lesser extent – a cooler air mass travelling north-east across South Africa.

Mozambique experiences a bimodal precipitation pattern. Situated on a latitudinal range of 10° and 28°, it’s a long country, and the exact onset of seasons depends on where one is in the country. The ITCZ reaches as far south as the Inhambane province – roughly three quarters down the coast. Generally speaking, therefore, the southern dry season runs April-September, the wet season October-March, while the northern dry and wet seasons run May-October and November-April respectively.

The north-east, which includes Pemba and the Quirimbas Archipelago, receives an average of 1000mm rain per annum. Here, during the summer, it is humid, thunderous and genuinely hot, with temperatures an average 28 °C, while in the winter temperatures drop to an average 19°C. Precipitation decreases as one travels south along the coast, but only slightly, and the Bazaruto Archipelago, just in range of the ITCZ’s most southerly oscillations, receives around 900mm a year. North or south coast, temperatures are similar wherever one happens to be.

Inland, the southern Gaza province is influenced by a cooler north-westerly air mass. With levels of evapotranspiration frequently exceeding humidity levels, the area is arid and receives less than 500mm of rain a year. The picture changes as one moves north onto the central and central plateaux: here – which includes Gorongosa National Park and much of Niassa National Reserve – the climate, like the coast, is humid, the average levels of rainfall ranging between 900mm and 1000mm. This humidity is tempered to the west, where the interior plateaux and mountainous zones reach heights of between 1000m and 2,400m, and can receive up to 2000mm of rain per annum.

So, coast-wise, Mozambique is best visited in the dry season, the timing of which, as we have seen, depends slightly on where one is. Sea temperatures vary slightly, May to September a lovely 20°C, October to April rising to 28°C. Diving is good all year round, though whale shark migrations occur during the wet season. Fishing depends on area and type of fish. Yellowfin tuna can be found any time of year, the sailfish season runs from late May to mid October, while wahoo season peaks in September.

Finally, as a rule of thumb, when we speak of the climate and its effects on wildlife, game viewing in Mozambique is best during the dry season, when the animals are forced to exploit fewer sources of water, and when the land is parched, dry and brown. During the wet season, the animals are afforded greater cover, are more widely dispersed and therefore are much more difficult to spot. Conversely, many experienced travellers and specialists prefer the wet season: the game is in better shape; it is when many species calve, and behaviour changes; and it is the time for watching birds. However, unless a specialist, very experienced or a bird watcher, May through to the end of September are the best times to travel to Mozambique. The roads are better, the nights cooler, game drives easier.