Opened as 2012, owner run and located in on the Mugie Conservancy, in North Laikipia, Ekorian’s Mugie Camp is another fine example of northern Kenya’s new breed of semi-permanent eco-lodges.

Set in and among a copse of mature Acacia (the end result of a very personal dream) its materials locally sourced, the construction carried as much as feasibly possible by local carpenters, Ekorian’s Mugie Camp is a largely thatch, wood and canvas build and consists of a central mess tent and 6 sleeping tents. The shared areas include a dining area, lounge, veranda, bar and golf course. Simply styled, characterised by lightweight seating, sisal rugs and functional, well built pieces of furniture, the overall feel is unfussy and welcoming. 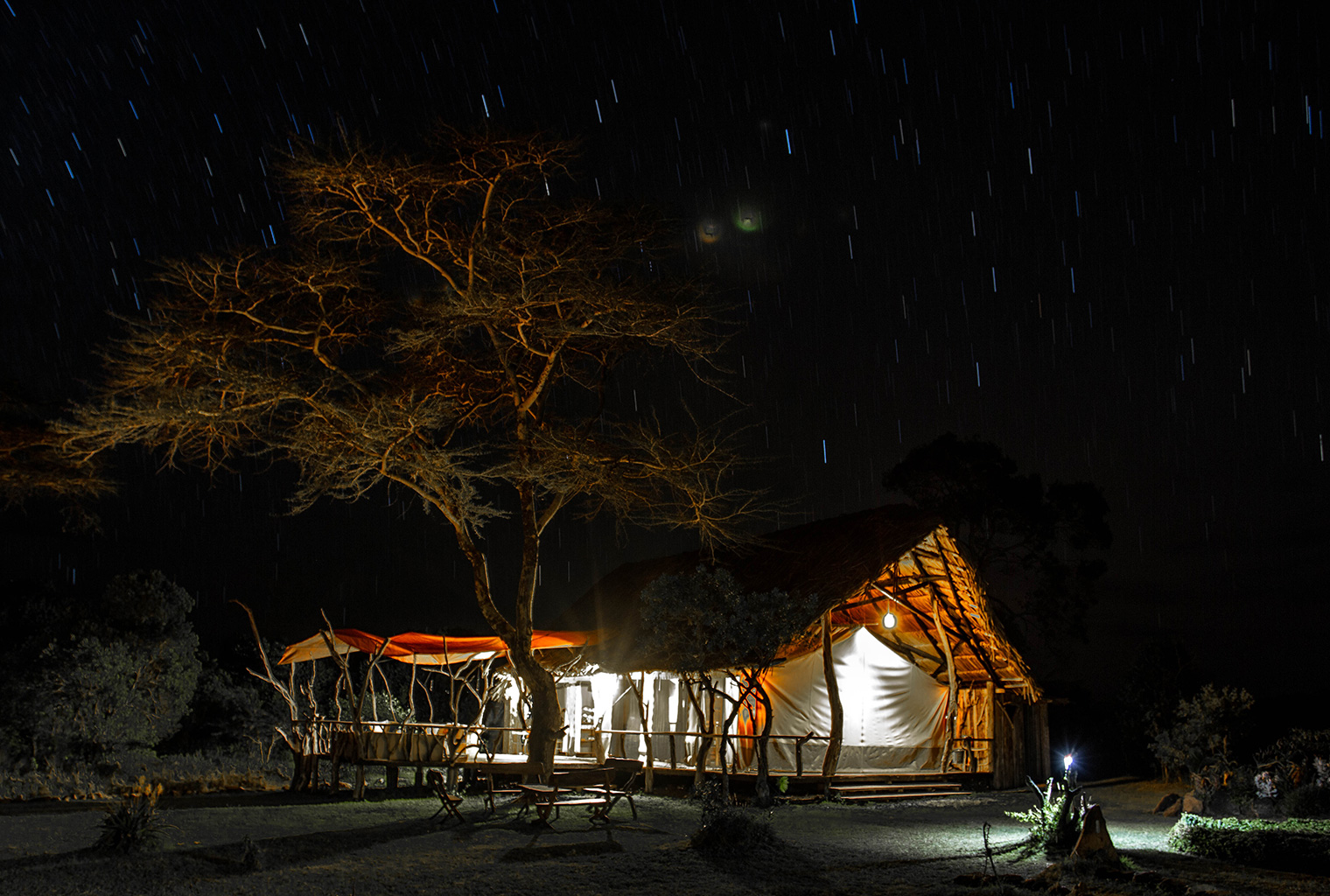 Feedback from returning travelers is excellent, each and every one citing the service – from kitchen to restaurant floor to the guided safaris – as first class. The food at Ekorian’s Mugie Camp is equally good, the kitchen staff trained up, overseen and led by an excellent chef, the cuisine described by many as both homely and delicious. Breakfast, hot or cold, bush picnic, afternoon tea and a three course evening meal – all are a delight. In an especially nice gesture, guests are welcome to use the host’s Wi-Fi if and when needed. 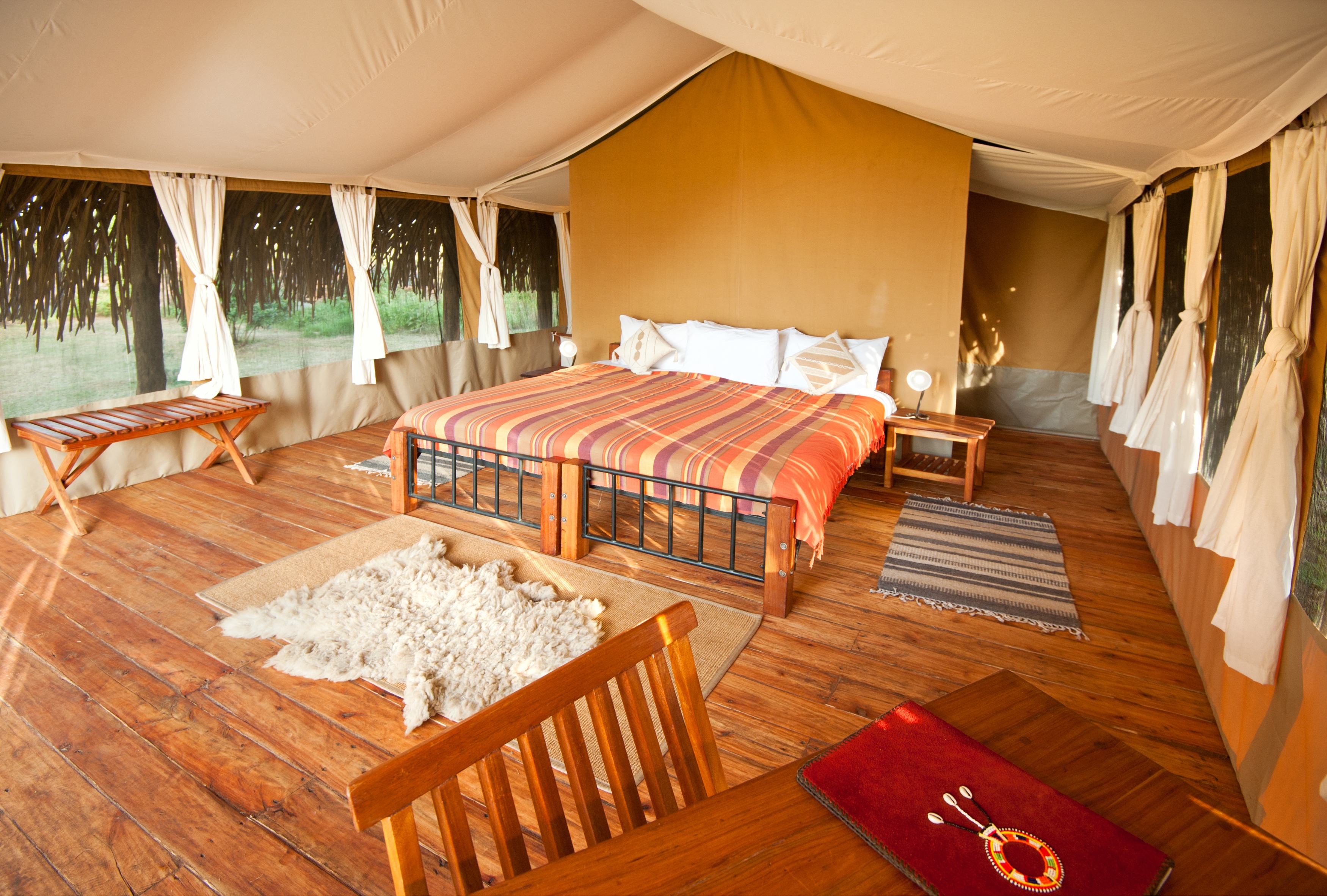 The rooms at Ekorian’s Mugie Camp are just as fine. Raised and space out in a line, their heavily thatched roofs dark against the sky, each includes double or twin beds, plenty of space to change, a private veranda and bathroom with shower. Spartan, clean and wood warm, the style is very much slow safari facing, the small comforts – hot water bottles – all the more wonderful for the lack of distractions; this is not gold tap luxury, but is all the better for it.

Conservation
Ekorian’s Mugie Camp works closely with Mugie Conservancy to tackle inevitable conflicts between local wildlife and humans. Monitoring is a method the Conservancy favours, as it allows experts to study the behaviour and movement of animals; solutions can therefore be tailored to suit each particular circumstance. Lion, for example, will move quite differently to cheetah, so it’s vital to collate accurate data. This data will also be used to help form and support wildlife corridors, which is crucial considering a new highway is nearing completion in the region.

Commerce
The camp views sustainable development seriously and takes care to employ staff from nearby communities and buy local products, such as food and craftwork. Mugie’s innovative community grazing plan – introduced to mediate land use between wildlife and humans – has been a success, creating managed conditions in which cattle can graze.

Community
The camp works in partnership with The Moyo Foundation to assist the local Mugie School, and guests are offered the chance to sponsor tuition or buy essential classroom supplies. The Foundation also focuses on healthcare by promoting the accessibility of local health clinics.

To find out more about Ekorian's Mugie Camp and to arrange your tailor-made trip, get in touch with us today.