Owing to the Congo’s size, its position, the fact of its local topographies, and effects of its forest canopies, predicting weather cycles for the country in its entirety is not an exact science. Best visited either at the beginning or, better still, in the middle of the year, it has a short dry season (January / February), a short wet season (March – April), a long dry season (May to September) and a long wet season (October to December). However, please note, given that Virunga possesses both the country’s highest and lowest rainfall levels (Lake Edward and Ruwenzori west, respectively), best time visits will depend on exactly where one wishes to go.

The Democratic Republic of the Congo (DRC) is the African continent’s second largest country and the 11th largest in the world. It is bordered by the Central African Republic, by South Sudan, Uganda, Rwanda, Burundi, Tanzania, Zambia, Angola, the Atlantic Ocean and by the Republic of the Congo. 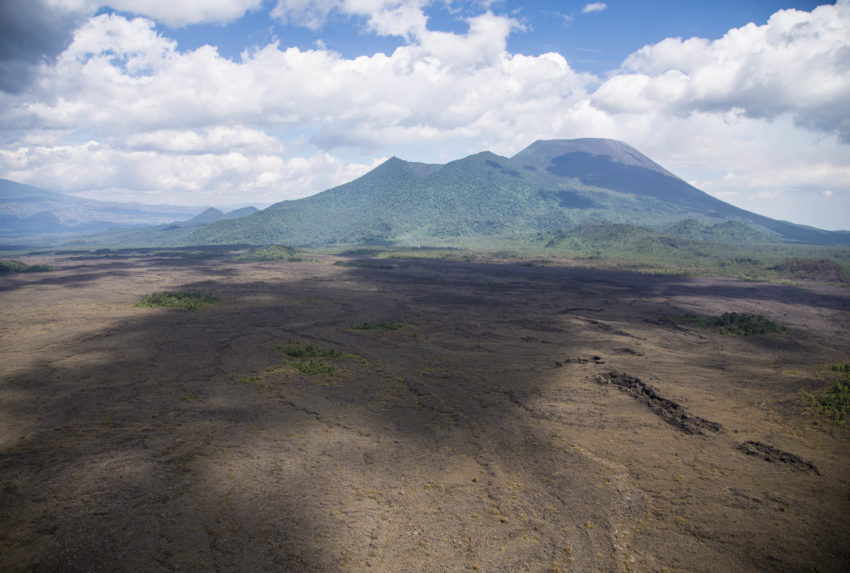 The DRC is located in equatorial West Africa between latitude 6°N and 14°S and longitude 12° and 32°E. Discoveries in the last few decades – including that of the famous Semliki harpoon – suggests human habitation in the area dates back from as far back as 80,000 years ago. It’s more recent history of civil war and unrest may put off the potential visitor, but the facts tell a different story: caution is still advised, but the DRC has been enjoying a period of relative tranquility, one which the growth of responsible tourism has been helping to consolidate. At present Journeys by Design operates in Virunga National Park.

Dominated by the Congo River basin, and by the world’s second largest rainforest, the DRC consists of vast plateaus, savannahs, mountain terraces and in the north verdant grasslands. Some of the mountain landscapes, particularly in the east, are more reminiscent of the Alps or Rocky Mountains. The country’s geology has been influenced to a considerable degree by the Albertine Rift, giving it its north-eastern mountains as well as the African Great Lakes: Lake Albert, Lake Kivu, Lake Edward and Lake Tanganyika.

The tropical climate that has produced the DRC’s vast system of rivers and variegated landscapes, as well as the country’s sheer size, also make it a place of climatic contrast, though one dominated obviously by warm and humid conditions. South of the equator, the rainy season runs from October and May. North, it runs from April to November. At lower altitudes, the average annual temperature is somewhere around the mid-twenties Celsius, and in the uplands a few degrees cooler. Daytime temperatures – especially with humidity taken into account – can be very much hotter, rising to around 35°.

According to most figures, the DCR has the highest frequency of thunderstorms in the world, with some regions receiving 2000mm of rainfall annually. Kinshasa, the capital, receives approximately 1400mm. Humidity is high throughout the country for most of the year. Mostly landlocked (its Atlantic coast is a very brief stretch isolated at the east), the DRC’s climate is dictated by its trans-equatorial position, though variation is afforded by its extreme range of elevations, with snow to be found on some of the higher ranges and peaks.

This said, it is useless to generalise about a region so large, and the planning of any visit to the DRC needs to be done so with specific areas and activities in mind. Virunga National Park itself offers both the DRC’s extremes of rainfall, from 500mm at Lake Edward to up to 3000mm on the Ruwenzori Mountains’ western slopes. Generally speaking, there is year-round precipitation, the rains being especially heavy from March to May, and from mid-September to mid-December. In the lowlands the mean annual temperature is in the low-twenties, and despite the DRC’s equatorial position, variations within this range (apart from at very high elevations) are not extreme.

The Democratic Republic of Congo is one of the most bio-diverse countries in Africa. Its troubled history has posed – and continues to pose – challenges threatening many species with extinction through poor conservation policies, environmental destruction and poaching. More recently, however, increases in awareness and tourism have resulted in great strides. The country’s warm and humid climate and range of habitat-types, in any case, result in conditions ideal for animals, including the African forest elephant, mountain gorilla, white rhino and a whole host of endemic species, most obviously the world’s only wild bonobo population.