Generally speaking, Botswana’s climate is similar to that of inland South Africa. Landlocked, dry and semi-arid, it’s best rains are to be found to the north-east, and levels decrease the further west and south one goes. 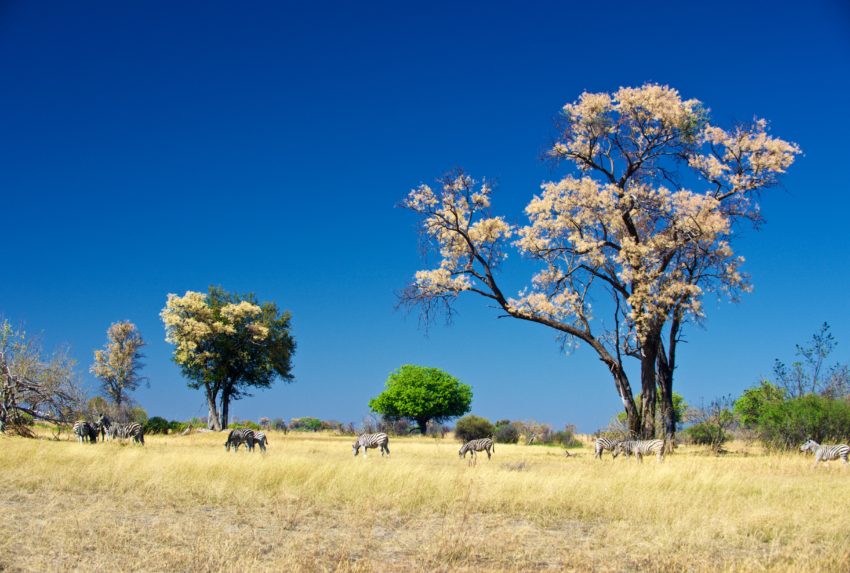 Summer is when it rains. It begins towards the end of November and continues right through to March. Humidity levels are high, as are temperatures; afternoons can be overcast and, in terms of viewing wildlife, this is off-peak time: with easy access to water, and plenty of cover, the game is dispersed and hard to spot.

April and May are beautiful. Dry, green and temperate, the weather is glorious. However, the cover is still a bit too good, and seasonal water sources are operational until mid-April, which means that good regular sightings require patience, a decent guide and a certain amount of luck.

Winter begins in May and finishes towards the end of October. Between May and August, there is almost no rain. Temperatures fall to around 25°C, humidity levels are just over a half of what they were, and the land starts to dry out. The cover is thin, water is scarce and wildlife concentrates in large numbers around permanent water sources.

In September, the temperature begins to rise in anticipation of the rains, and in October it can reach up to 40°C. The land is parched, the vegetation dry, brittle and brown. Still excellent conditions for game, these last winter weeks are quite uncomfortable, and in places the rains do not arrive until late November, early December.

Clearly, the best time for viewing game runs from May to October. However, while it is less easy to spot during the wet season, there are some advantages to visiting in the summer months: the game is in better shape; it is when many species calve; behaviour changes, allowing for specialist interest; and it is the time for watching birds.

The above constitutes the average annual weather patterns of Botswana’s dry cycle. This deeper weather cycle lasts for between 10 to 15 years.

The last dry cycle began in the mid 1980s, finished in 2005, giving way to a new wet cycle. Above average levels of flooding and local rainfall in northern Botswana in 2008 and 2009 have led to 2010 being called a ‘super year’. The rains lasted into April, and areas previously seasonal were wet the year round.

The knock-on effects of an overwhelmingly riverine habitat saw an increase in the number of water specialists, such as lechwe, sitatunga, buffalo, crocodile and hippo, and that the availability of water away from the delta and riverfronts resulted in the forging of new migratory corridors. Predators found the extra months of cover something of a challenge, while the increase in the number of insects, amphibians and fish had a marked effect on the number of species of bird found in the area. In terms of planning safari styles and times to visit, wet safaris replaced traditional plains-based game-drive orientated safaris for significantly longer periods of the year.

As of 2018, Northern Botswana began transitioning to another dry cycle, reversing the above wet cycle effects.