I’ve been thinking about how much good news there is recently, but how rarely we hear it. Bad news sells so much better. The result can be a spiral into hopelessness about the world and the people in it. But I am here to assure you that there is much, much more to feel hopeful for. Part of the fun is seeking it out. If sad news is an easy and unhealthy meal – a double cheeseburger – then good news would be a seven course affair beginning with foraged vegetables and ending with a locally roasted espresso – difficult to gather, but once there, a touch of heaven.

In the recent past, we have introduced you to Lotte Davis, founder of One Girl Can that supports school girls in Kenya and Uganda to achieve their goals and dreams, to Peter Marsden, who works for Concordis in areas of bitter conflict to mediate peace talks, to the heroic Denis Mukwege, DR Congolese gynaecologist and anti-rape activist winning the Nobel peace prize, and to Greta Iori, Wildlife Crime Consultant, who brings the powers that be together to reach an accord on how to tackle problems of human-wildlife conflict. We have told you about the end of hostilities between Ethiopia and Eritrea, we’ve told you that despite the conflict in South Sudan between Dinka and Nuer, ex-child soldiers are going to school and local people from both sides are meeting to find common ground. Given that a) some of these happen in places where you’d least suspect it and b) all the aforementioned falls into quite a niche area of news, I think it’s safe to assume that if we look for it, we’d find a lot more good news out there.

Good news like Tara Walraven and the Nomad Trust. Nomad Tanzania is one of the finest safari outfits in Africa, running ten camps and lodges throughout Tanzania, including the much coveted Greystoke Mahale. Tara is Marketing Manager at Nomad Tanzania. We became friends years ago after meeting in the wilds of Northern Tanzania and years later we still occasionally catch up to chew the fat. She grew up in Harare, lives in Arusha, works for Nomad Tanzania and is ’ninety percent vegetarian’. She was kind enough to find some time for a good-news interview:

What is the Nomad Trust and why was it set up?

The Nomad Trust is a charity offshoot of Nomad, and is a result of Nomad trying to find its ‘why?’. It focuses on three areas: conservation, education and health. It involves a mix of partner projects that we support financially and any other way they need our help and we have our own initiatives which are run by the Nomad Trust. It addresses the question that asks why we get up in the morning to do what we do with tourism. If all of us, through every arm of the company, make it that this business is a force for good in every single possible way it can be, then that’s worth getting up in the morning for and it’s what sets our souls on fire.

How has it changed since its beginnings?

The trust has become very much central to what we do at Nomad, almost to the point where Nomad is the work of the trust and in order to be able to do the work of the trust, we run safaris. The projects we run are doing great work and deserve our support, but in essence, what we’re really trying to do is leverage the skills we have in our logistics and our locations, pair up with people and organisations who have skills that we don’t have, and work out where where we can have the most impact.

Tell me about some of the projects?

One of the initiatives is ‘Beds for Meds’, which is basically where we find empty spaces in our camps, fill them with doctors, dentists, optometrists or anyone else that’s needed. We treat them as we would our guests, but instead of them going on wildlife drives, they run outreach clinics in the villages nearby and treat people who need it. We’ve just had eye doctors at Entamanu and got them going to Greystoke (Mahale) soon. It makes somewhere like Greystoke make sense – if it wasn’t there then we wouldn’t be able to reach these communities or raise the funds for these projects.

A big project we’ve been doing is with a hospital in Arusha called the Plaster House, which treats children with things like clubfoot, cleft palates and burns. A lot of these children are hidden from society because of societal stigmas, so our guides go out to the villages to do outreach and get families to bring them forward and we fly them into Arusha to have the operations, where they stay for their post-op care and then we fly them back.

We’re also trying to find different ways that we can get involved in conservation. There’s chats about doing some pangolin research at Mahale – we’ve got giant pangolin down there, which isn’t even listed as being in Tanzania. So trying to get funding for surveys and research to estimate population sizes and to understand their behaviour.

Also we have a couple of interns at Lamai, who come from Mugubu Hope Centre, which is a refuge centre for girls fleeing FGM. They are getting involved in every aspect of camp life, learning the ropes. Hopefully for them it’ll be life changing and open some doors for them. We’ve also organised an internship for a young guy at a project we run in Katavi to get some hands on experience. The main focus for him is on sustainable livelihood, studying beekeeping and solar-stoves. He went down there and helped organise a couple of village film nights and helped out in the school.

We want to work out how we can have guests engage with it in a real way – there’s a lot about ‘corporate responsibility objectives’ these days that I feel leaves people disconnected. Instead of just trying to throw money at a problem, we want people to get involved in real tangible ways. And it’s also extending into all sorts of things like how we run our camps, plastic usage, waste disposal and whether the eco-loos really are the most eco-friendly way to operate that camp and all that stuff. It’s a lot of change to the structure, but we’ve always been doing it: only now we’re defining it.

Like I said, there’s plenty of good news out there, we just have to look for it. A huge thanks to Tara for her input and do stay tuned for any updates on the Nomad Tanzania Trust. If you’re interested in visiting Nomad’s camps, then please do get in touch. You can take it from me that you’ll have the safari of a lifetime. 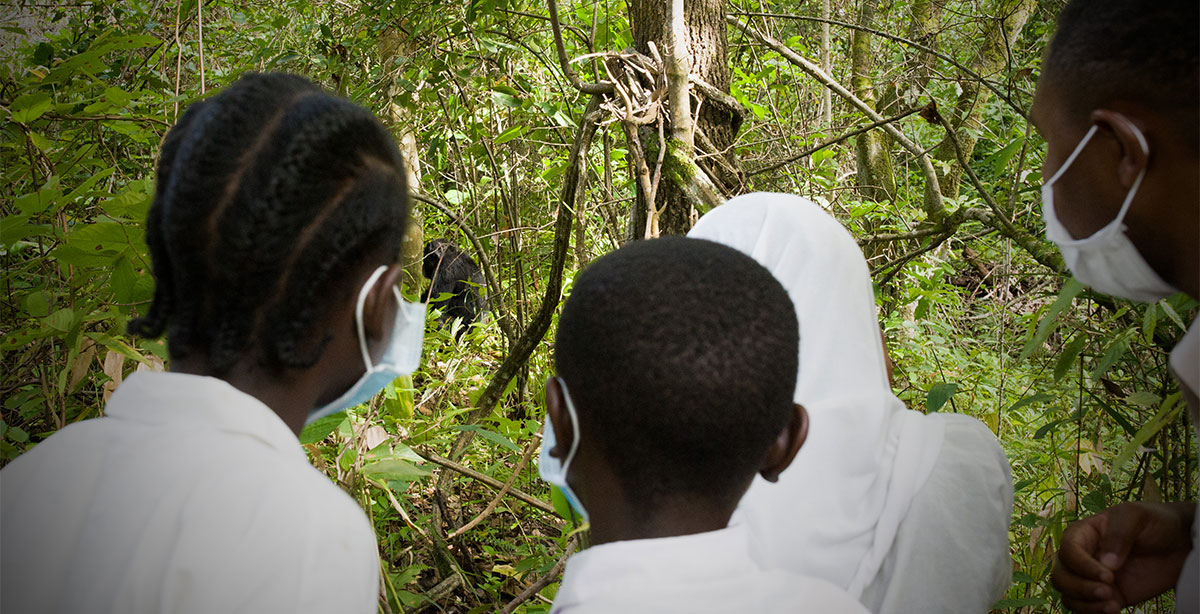