I was fortunate enough to catch up with Sam Tinkler. Now sitting on the sales support desk, she has had much experience on the ground managing camps. Having lived in Ruaha for three years, running Jongomero, she fell in love with the butterflies there, which she documented and made a book of.

How did you come to be a butterfly enthusiast and what is it that you love about them?

I’ve always thought of butterflies as these amazing beautiful creatures that are just perfect. There’s no default pattern for any butterfly species. All of them are different, but still there’s a perfect symmetry to each side of each pair of wings. I had never had a huge amount of exposure to the different types and varieties until I started working in Ruaha. June is usually the month where they’ll all start coming in – from after the rains, when the flowers come out and it becomes like a little wonderland of different fluttering beauty all around you. The colours are something special and there are so many of them. We were there for three years, so something that I looked forward to was opening the camps back up in June. We would come back in mid-May and would be like a welcoming party – all the flowers in bloom and butterflies out in force. Even people who weren’t butterfly enthusiasts would start taking pictures and the camp is completely transformed. So, I came to appreciate them mainly because they were just there really. Whereas I suppose before, living in a city, you don’t normally see things like that, apart from the odd one in the garden. But imagine stepping out and seeing eight to ten different varieties just walking around the camp!

When did you decide to make a book?

I just started taking a couple of pictures and then I became more obsessed with trying to get a really good ones so I could go back and identify them. I mostly knew all the common ones by then. We had a very good friend who lived in the park and helped out with a lot of the bird lists and maps for the park. Sue said to me one day that they didn’t have a butterfly species list for Ruaha. I had maybe got about twenty different butterfly pictures that I had just kept on record for myself already, so this got me thinking. I thought maybe we should do a coffee table book and start identifying them and see. It took a lot of patience, but actually I found the act of just standing there waiting patiently was quite calming. And eventually I’d get a good shot whether it took a couple of hours or months.

How long did it take to collect these photos and gain your knowledge for the book?

About two years. You take a lot of photos, but sometimes they won’t be in focus and can’t be used in a book or just not good enough for identifying purposes. So I have hundreds of pictures, but there’s only a select few that you can keep. So, it took me about two years and then another year to actually properly identify and put the book together after that.

Any interesting facts about butterflies?

There are a lot of great facts. The one that I quite like is that butterflies are easily startled and you just have to be as quiet as possible trying to take a picture. But if you just wait patiently, more often than not it will come back to the same flower or plant. So, if you think, ‘Ah, I’ve scared it off’, don’t be too quick to walk away. Just stand and wait because if they’re nice flowering plants around then it’s sure to come back.

Do you have a favourite butterfly and why?

Wow, favourite butterfly – that’s a difficult one for me. I’ve got a few favourites for different reasons I suppose. Sometimes it’s just one that I got a good shot of or one that was caught in the sunlight properly. Sometimes the smallest ones have the brightest colours. And even the the little blues and the little browns are so pretty. So, I think you learn to appreciate each one because they’re so different. Though saying that, I think the common scarlet is probably one of my favourites. It’s a beautiful little butterfly with bright red colours. I also liked the foxy charaxes and the common joker, which is bright orange – you can’t miss them because they just catch your eye in amongst the green and brown of the bush.

What did you find most challenging about being a lodge manager?

The biggest thing is all the logistics – trying to get everything organised with everyone in the camp and out of the camp and working out all the timings for different things. Some guests are going on wildlife drives, some are being driven to an airstrip, while others are being picked up from a completely different one. So it’s all trying to logistically work out everything that goes with that. Then there’s restocking all our supplies. If you’re lucky enough to have good facilities close by then it’s not too bad. When we were at Ruaha, it was a five-hour drive just to get to the nearest village. You could get everything you wanted there, but they’d have to overnight and come back the next day. Then anything to do with dietary requirements had to be flown in from Dar. If your supplies don’t come – for instance, if they can’t get bananas and mangos – it’s going to be a bit of a problem; you have to work out what could be a substitute. When it came to managing guest and staff needs, it’s relatively easy compared to trying to work out those nitty gritty logistics.

Any advice for a first-timer on safari?

Try to enjoy every moment because everything will be new and exciting. As soon as someone tells me they had never been to Africa before, I would think, ‘Wow, this is going to blow your socks off’. It’s important to have a camera to snap those moments and memories, but try not to just stay behind it the whole time or you’ll end up just missing the whole experience. Take a couple of pictures, most of those will come out pretty good, but otherwise, now and again, just put the camera down and enjoy the moment being where you are.

What is your favourite safari destination in Africa (apart from South Africa and Tanzania!)?

We did a little article a while ago on the alternative seven wonders, so I spoke a little about Botswana. It is a very beautiful place and there’s a lot to do, different from any of the stuff I’d normally have done on safari, like boating in the mokoros. There’s lots of wildlife, very different terrain and obviously has got a lot of water. But Ruaha… We spent a lot of time there and it is so remote. There’s nobody around and not much traffic that comes through. It’s still very very untouched. You really just have that whole wilderness area to yourself and that’s really something that’s quite unique and not common, I suppose.

When are you next in Africa and where are you going?

South Africa – we’re going this weekend! So, the first week we’re just in Johannesburg visiting friends and family and then for six nights we’re going up to the bush and we’re going into Sabi Sands area in the Kruger staying at Kirkman’s Camp, then Singita Lebombo, Chitwa Chitwa and then we’re going up north to a place called Klasirie Drift, before heading back to Jo’berg for ten days and then back to Brighton.

With thanks to Sam Tinkler for telling us about being a lodge manager and about her butterfly book. We have a talented team surprising us every day. If you’re interested in ordering a copy, please do get in touch. 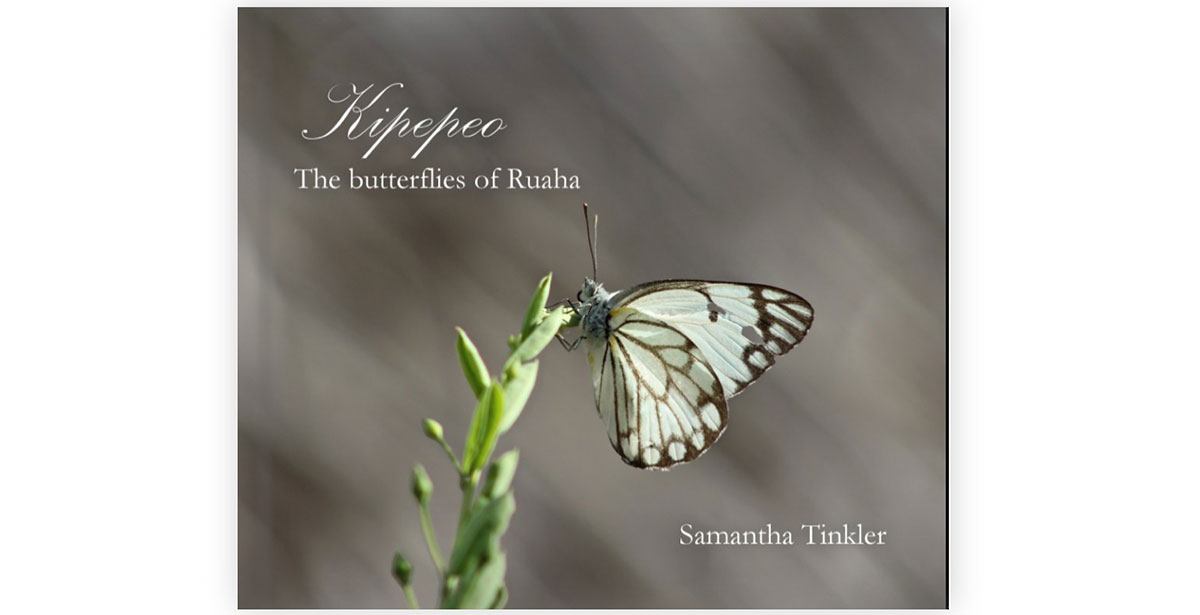