Delighted to share in this time of no-travel the work of conservationist and wildlife artist Sophie Walbeoffe, and particularly the fact that her latest offering Birdsong – exhibited (online) as of today at The Osborne Studio – is accompanied by the launch of her book Impressions of Amboseli, which includes the paintings, and is narrated by friend and fellow conservationist, Cynthia Moss.

I’m new to Walbeoffe’s work, but know that she studied painting at Wimbledon School of Art in the early 1980s, after which she travelled and painted before settling in Kenya. When researching her, I was particularly intrigued to see that she is the subject of a book authored by the prolific Ian Strathcarron and by art critic (and even more prolific) Edward Lucie-Smith. It’s entitled Painting With Both Hands, which isn’t a metaphor: Walbeoffe paints with both hands. 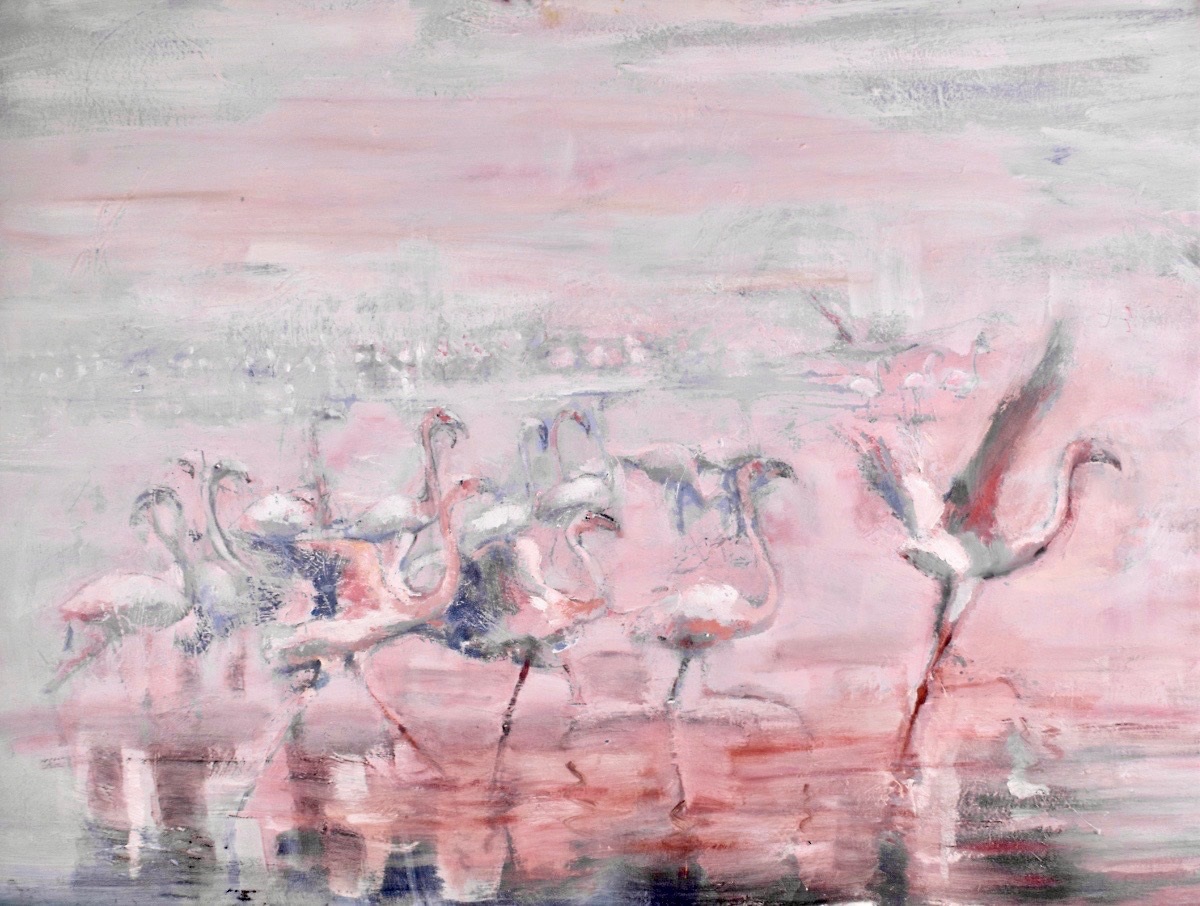 Both Birdsong and Impressions of Amboseli are the result of Walbeoffe having had the good fortune to have been hosted over the course of three years by Moss, who was introduced to her work in 2002, a chance visit to a Nairobi show resulting in snapping up a ‘most spectacular painting of a landscape I knew so well – Amboseli.’ Those of you in the world of conservation will know Moss – perhaps personally, certainly by reputation. Her work on the ethology of the African elephant precedes her. Her remarkable non-profit Amboseli Elephant Research Project has over the last 48 years given the world much by way of how elephants live. Asked once what, for her, is one of the most significant things about elephant behaviour, she is reported to have said: ‘Elephants are kind – to each other.’

Elephants are the main subject of both book and show. However, as the exhibition’s title suggests, birds play a super-strong supporting role. Encouraged by Moss, Walbeoffe’s time in Amboseli saw her ‘becoming more interested in the birds’, resulting in studies and finished paintings of pelican, flamingo, ‘all sorts of waders and water birds, as well as golden weavers.’ It seems the birds actually helped her paint elephant, their ‘freedom and colour’ a link between the ‘infinite space between earth and sky, and wonderful ‘contrast to the heavy, grey and grounded elephants.’ 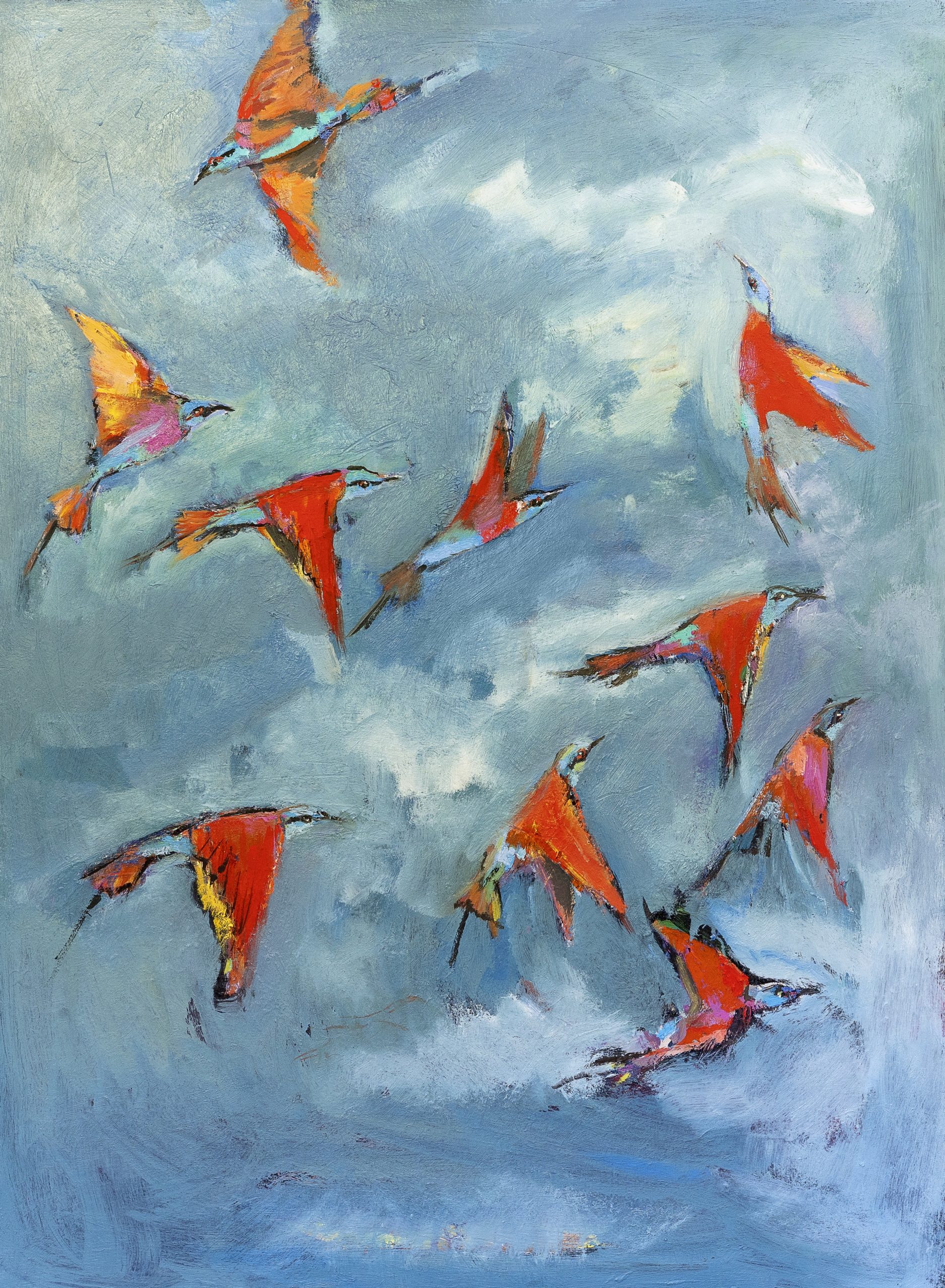 Even more, I love that the artist in Walbeoffe is as much inspired by the sheer joy of birds as she is the formal painterly support she takes from them. On ‘hot bright sunny days so the birds sing and sing and it’s a crazy beautiful place to paint.’ While no painter, I recognise this, as I’m sure does anyone fortunate enough to have spent a lot of time in Africa’s wildernesses. As shared before, my mother introduced me to the joys of birds via a bird table and the Collins Field Guide to The Birds of East Africa, and everything I feel about them I see in Walbeoffe’s work. Her The Congregation and Cacophony Tree (below) has them at their most soulfully riotous, the orange against the blue in Carmine Bee Eaters (above) at their most soulfully beautiful. Walbeoffe paints as she feels: full of the life she nearly lost, when she briefly died on the operating table, and ended up in a ‘golden fluttering room’. The birds – possibly every painting – she paints are a return to that luminous room.

On which note, I urge you to visit the exhibition online at Osborne Studio Gallery. It’s the fifth time the gallery’s exhibited Wallbeoffe’s work, though never in such constrained circumstances. Before COVID-19, today would, I’m guessing, have been preceded by a private view, at which Moss would have been present. Even so, it’s on, digitally accessible, there’s a pricelist, a catalogue, a video, and an e-book, and both the Amboseli Trust for Elephants and the Tristan Voorspuy Conservation Trust are benefices of the exhibition. Go see it – from wherever you are. 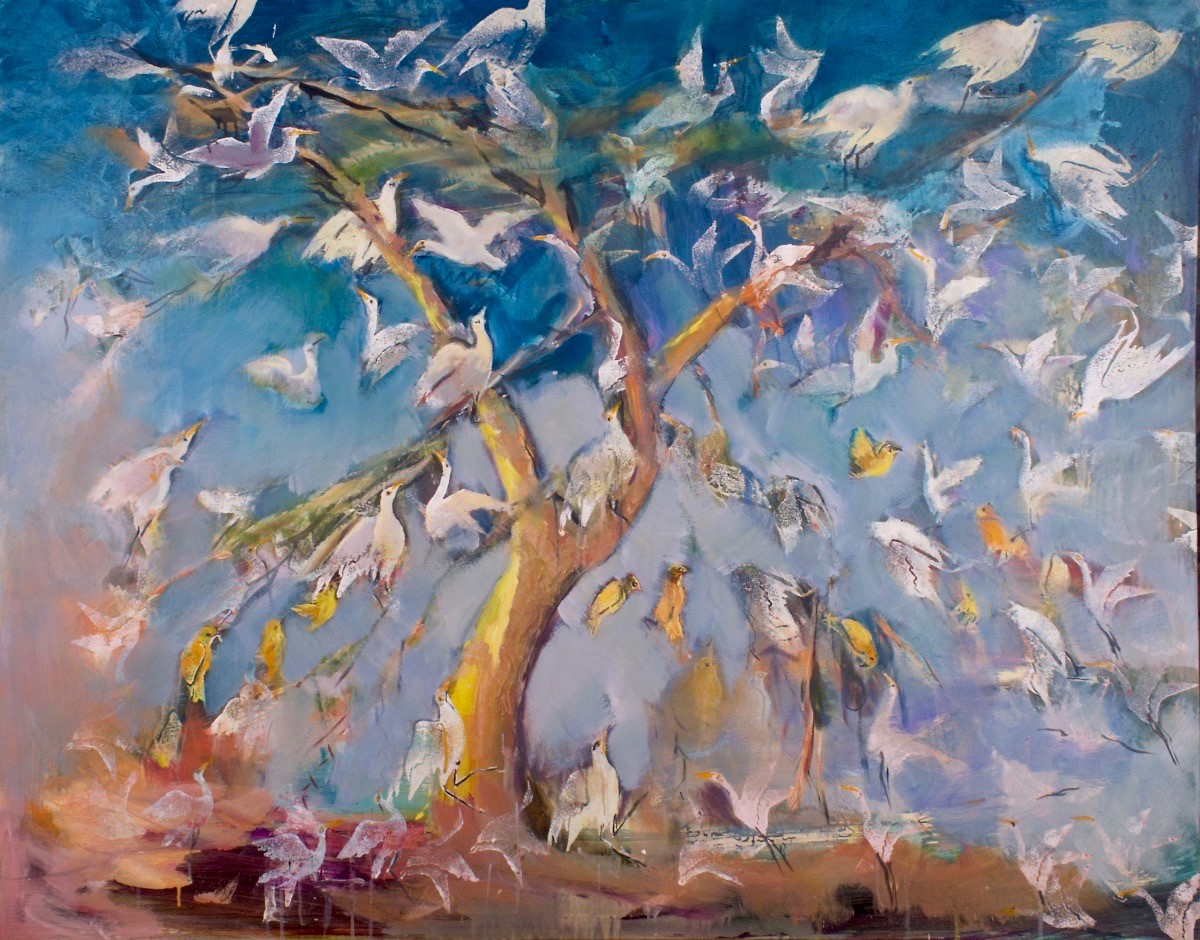